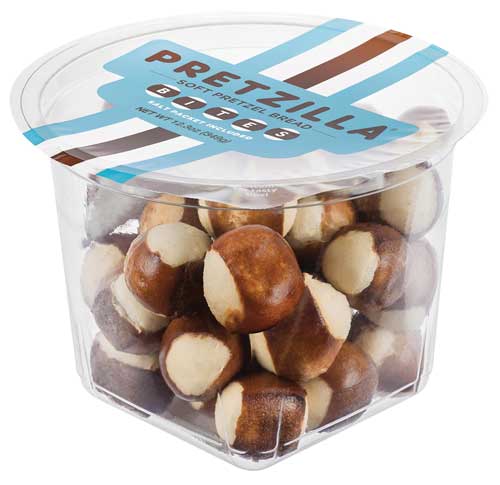 The United States has the highest sales volume of prepackaged bakery products. Japan, Europe, Brazil, and China are large secondary markets for prepackaged baked goods. For baked goods, packaging can extend shelf life by decreasing the primary modes of deterioration. Baked goods deteriorate due to staling, water loss or gain, oxidation, and microbial growth. While innovative enzyme technology and dough strengtheners can partially reduce staling, it remains a primary mode of deterioration. Slight water loss or gain on the surface of baked goods rapidly creates an unacceptable product texture. Lipid oxidation of the unsaturated fats results in off-odors and off-flavors within the package. Proper packaging can stall oxidation or allow these off-odors and off-flavors to escape. Yeasts and molds are primary microbial concerns, but flour contaminated with Escherichia coli has led to heightened concerns about dough and other products (such as some truffles and icing) that contain flour but are not cooked. Packaging to extend shelf life to preserve consumer spending dollars, decrease food waste, and increase food safety is being addressed using three main packaging technologies: barriers, modified atmosphere packaging (MAP), and freezer-compatible packaging.

Barriers
Packaging barriers for bakery products are either high or poor oxygen barriers. The rate of oxygen transmission in packages, initial oxygen levels, and the rate of lipid oxidation all play a role in optimizing a package to extend product shelf life. High-barrier (less than 0.2 cc/100 in2 per day at 73°F, 0% RH) packaging is used to maintain a modified atmosphere within packages. High barriers commonly employ ethylene vinyl alcohol or polyvinylidene chloride to serve as the oxygen barrier. This layer is then placed between layers of polypropylene or polyethylene terephthalate and nylon (for puncture resistance) and a polyethylene or elastomer layer for seal integrity. If oxygen levels are not low enough to stall oxidation, off-odors or off-flavors from secondary reaction by-products such as hexanal are generated and remain in the package. This results in products that are organoleptically unacceptable and is most common in baked goods with high levels of polyunsaturated fats.

During the oxidation process, oxygen within the package is consumed. Oxygen levels above 3% can result in rapid mold growth, so maintaining a low oxygen level within a high-barrier package is imperative. Examples of bakery products sold in high-barrier packaging include Mestemacher bread and Mama Mary’s pizza crust. Use of poor packaging barriers (above 10 cc/100 in2 per day at 73°F, 0% RH) for products prone to lipid oxidation allows oxidation to occur and off-odors and off-flavors to permeate through the package. This is a common packaging solution for products with a short shelf life such as donuts displayed in open cases and cakes baked and packaged at retail for rapid sale. For example, bread sold within bakeries is packaged in printed or plain polypropylene or paper bags. Many bakery products employ low-barrier packaging, including Fanzeluta crisp bread rings, which are packaged in polypropylene bags; Atotonilco corn tortillas, which are packaged in printed paper-based bags; and Ara-Z lavash bread, which is packaged in printed polyethylene bags.

MAP
MAP is used in the bakery industry to create a low-oxygen environment to stall lipid oxidation and microbial growth. For baked goods with a water activity (aw) above 0.85 and a pH above 4.6, it is essential to maintain an environment unsuitable for the growth of Clostridium botulinum because it can contaminate products before or after they’ve been baked. Contamination by Salmonella spp., Listeria monoctyogenes, and Bacillus cereus are also concerns. Careful control of the MAP environment is needed to ensure the package environment does not reach 0% oxygen and is not conducive to the growth of C. botulinum. However, since the growth of mold and the oxidation of lipids in the presence of oxygen are major causes of reduced shelf life in baked goods, low-oxygen environments extend product shelf life. Maintaining a safe product with an extended shelf life is the reason that the oxygen level for packaged baked goods (with an aw above 0.85 and a pH above 4.6) in modified atmospheres typically ranges from 3% to 15% oxygen. The oxygen level is maintained using a defined package oxygen transmission rate; an initial modified atmosphere oxygen level; and knowledge of the distribution temperatures that alter polymer permeation of oxygen, mold growth, and oxidation. Many baked goods are packaged in open systems where air moves in and out of the manufacturing environment. For this reason, mold growth often increases as the packaging environment changes from cold and dry to warm and humid. Likewise, for products distributed in uncontrolled temperature conditions, package permeation and microbial and oxidative reactions increase in the warm months and decrease in the cool months.

Modified atmospheres are combined with high-barrier packaging to extend bakery product shelf life. To achieve an oxygen level below 21%, package headspace is partially or entirely replaced with either nitrogen or carbon dioxide or a combination of the two. The ratio of carbon dioxide to nitrogen in the package headspace depends on the product. “Since carbon dioxide permeates into the product and dissociates to carbonic acid and then to bicarbonate and hydrogen ions, use of carbon dioxide can affect product flavor profile, product texture, and pH. A blend of carbon dioxide and nitrogen avoids a vacuum package environment. Testing with different gas blends is needed to ensure the best blend for a specific product,” says John Foss, principal applications engineer at Airgas, an Air Liquide company. For example, gluten-free bread by Schär has a ratio of 60%–75% carbon dioxide and 25%–40% nitrogen, which extends the shelf life while not impairing the product’s texture. Gases are supplied in a range of volumes from 300 to 50,000 to 600,000 standard cubic feet in cylinders, bulk tanks, and trailers, respectively, as well as by pipeline and onsite air-separation units. Gas selection is also location dependent with carbon dioxide being readily available and cheaper in areas where it is generated as a by-product.

Unlike other products, baked goods contain empty space within the product. For this reason, attaining 0% oxygen levels by flushing with carbon dioxide and nitrogen during packaging is usually not possible. For example, initially at product fill, oxygen levels can be close to 0% oxygen when gas flushing containers in a typical rotary vacuum machine or in a form-fill-seal flow wrap machine. But after the package is sealed and the air within the product and package headspace equilibrate, oxygen values rise 5%–10%. For this reason, the air within the product prevents a 0% oxygen environment within the package after equilibration. This provides a safety net for products above 0.85 aw and 4.6 pH in which C. botulinum growth is viable at 0% oxygen. For baked goods, gas flushing with 100% carbon dioxide allows for cost savings since a mixer tank is not required and often results in carbon dioxide levels of 60%–80%, nitrogen levels of 5%–35%, and oxygen levels of 5%–15%. This allows for carbon dioxide at a level above which microbial growth is stalled. Controlling the amount of carbon dioxide, nitrogen, and oxygen within the package is a function of production line speed, gas flow, package permeation, and product porosity.

Oxygen-absorbing sachets and film, photosensitive dyes, and package surface treatments such as glucose oxidase can create a modified atmosphere within a high-barrier package. These solutions are used with and without gas flushing with carbon dioxide and/or nitrogen. Developments in oxygen scavenging films and in light-activated film provide seamless removal of oxygen and reduce light-induced lipid oxidation. These films include OS Film by Sealed Air, SHELFPLUS O2 by Albis Plastic, Amosorb by PolyOne, AGELESS OMAC by Mitsubishi Gas Chemical, OxyRx by Mullinix, and Aegis OXCE by Honeywell. Sachets composed of sodium erythorbate and sodium carbonate or bicarbonate by Atmosphere Control react with oxygen and emit carbon dioxide. Carbon dioxide emitters and converters include Active CO2 pad by CellComb, CO2 Freshpads by CO2 Technologies, packets and sachets by Moxiyo, and SuperFresh by Vartdal Plast. 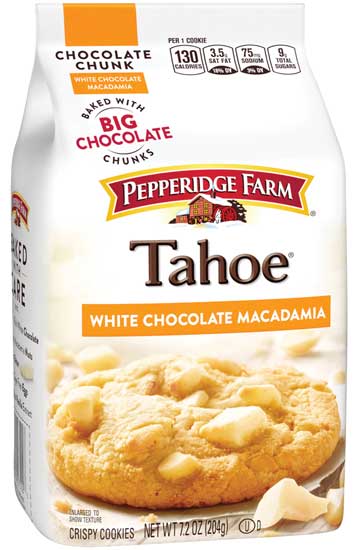 Low-Temperature Packaging
Reducing staling, oxidation, and microbial growth using packaging that is compatible with low temperatures is increasing. In fact, low temperatures stall deteriorative reactions sufficiently so that preservatives are unnecessary. As consumer interest in clean label products increases, packaging that is compatible with freezing temperatures is becoming more common for baked goods. In many instances, baked goods are frozen during distribution and sold at ambient conditions. This allows for an expanded distribution network, little or no product preservatives, and a fresh appearance at retail. For example, donuts by Wenner Bakery have a three-day shelf life after thawing. Extending the shelf life of baked goods such as donuts via cold chain is an effective method of extending shelf life since staling occurs most rapidly at temperatures of 50°F–77°F.

Packaging for foodservice bakery products often relies on a cold chain and minimal packaging to extend product shelf life. For example, A&K Foods packages frozen pizza crusts for institutions, schools, and restaurants in polyethylene bags and corrugated boxes. This freezer-compatible and recyclable packaging allows foodservice operators to easily remove individual crusts. Freezer-compatible packaging requires resiliency at low temperatures. Of particular concern at low temperatures are adhesives on paperboard, cartons, seal layers, and the many layers within laminate structures. For example, because of the high glass-transition temperature of polypropylene, it is very brittle at low temperatures. For this reason, polypropylene films and rigid containers designed for freezing are commonly blended with polyethylene, and amorphous polyethylene terephthalate containers are designed to absorb stresses of dynamic and static distribution. Ease of storage in consumers’ freezers is a growing need in package design.