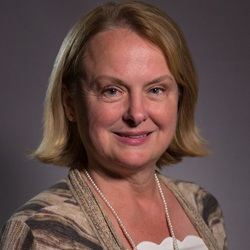 “From the first settlers who came to our shores, from the first American Indian families who befriended them, men and women have worked together to build this Nation. Too often, the women were unsung and sometimes their contributions went unnoticed. But the achievements, leadership, courage, strength, and love of the women who built America was as vital as the men whose names we know so well.”

When March rolls around each year, I can’t help but think back on the early days of my career. In my first food science position, I worked in a food chemistry lab within an R&D facility. Almost everyone wore white coats, even our vice president. The majority of the R&D team wore white pants and tops provided by the company with comfortable and sturdy white nurse shoes. However, many of the women found a way to express their individuality by eschewing the white top in favor of wonderful, colorful blouses. Why not be a fantastic scientist while also looking great?

As we celebrate Women’s History Month, I want to give a shout-out to all those women who have broken down barriers and paved a path for the rest of us.

I had the good fortune to work with numerous female peers who were making their way in various parts of the food industry—sensory, microbiology, marketing, consumer affairs, quality assurance, R&D, and more. We supported each other, shared a passion for our life’s work, celebrated successes, lifted each other up, and probably vented to each other a time or two. We do a lot of growing up at work, especially in the early days of our career, and these women made the day-to-day demands that much more enjoyable. I’m blessed to still be in touch with many of these women today, more than 30 years later.

I was also fortunate to have many wonderful female role models early in my career. From the smart and fashionable R&D scientists to female quality assurance leaders who could take charge of their large teams, shut down production lines when things didn’t go as planned, and generally hold their own in the plant manager’s office or the boardroom, I was able to experience the leadership of strong women who ruled their domain throughout my career.

Whether you can relate more to my experience or theirs, it is exciting to see the pendulum swinging in a positive direction. According to the National Science Foundation (NSF) and National Science Board (NSB), the number of women in science and engineering occupations or with science and engineering bachelor’s level degrees has doubled over the past two decades. Today, women make up over 34% of all scientists (engineers excluded). Looking more specifically at agricultural and food science (which are combined in the NSF/NSB labor stats), 31% are women.

IFT membership data paints an even brighter picture for women in the science of food. Almost half of IFT members (49%) are women, and I have had the great pleasure of working with many of them in various capacities over the years. Focusing in on our student members, 69% identify as female. Hopefully that means the days of being the only woman in the room are behind us for our up-and-coming food scientists and technologists.

As we celebrate Women’s History Month, I want to give a shout-out to all those women who have broken down barriers and paved a path for the rest of us. Your knowledge, tenacity, and perseverance helped make it possible for the future leaders of our industry to see the possibilities before them. Your efforts have been noticed, and we sing your praises.

I also want to take a moment to recognize the men who have supported the women in their lives: the dads who provide guidance or a listening ear, the husbands who pick up the kids when we get stuck at the office or who get dinner on the table, and the co-workers who collaborate with us, respect us, and realize we are all on the same team. And the leaders who recognize our knowledge, talent, and contributions, and work with us to create opportunities for career growth, enjoyment, and success.

The future of food requires a diverse array of talents to challenge conventional thinking, obliterate the status quo, and find innovative ways to tackle problems. Together, we can, and will, feed the world.