Join the Discussion
To join an online discussion about rising food prices, IFT members can visit IFT Connect. Share your thoughts and see what others have to say! 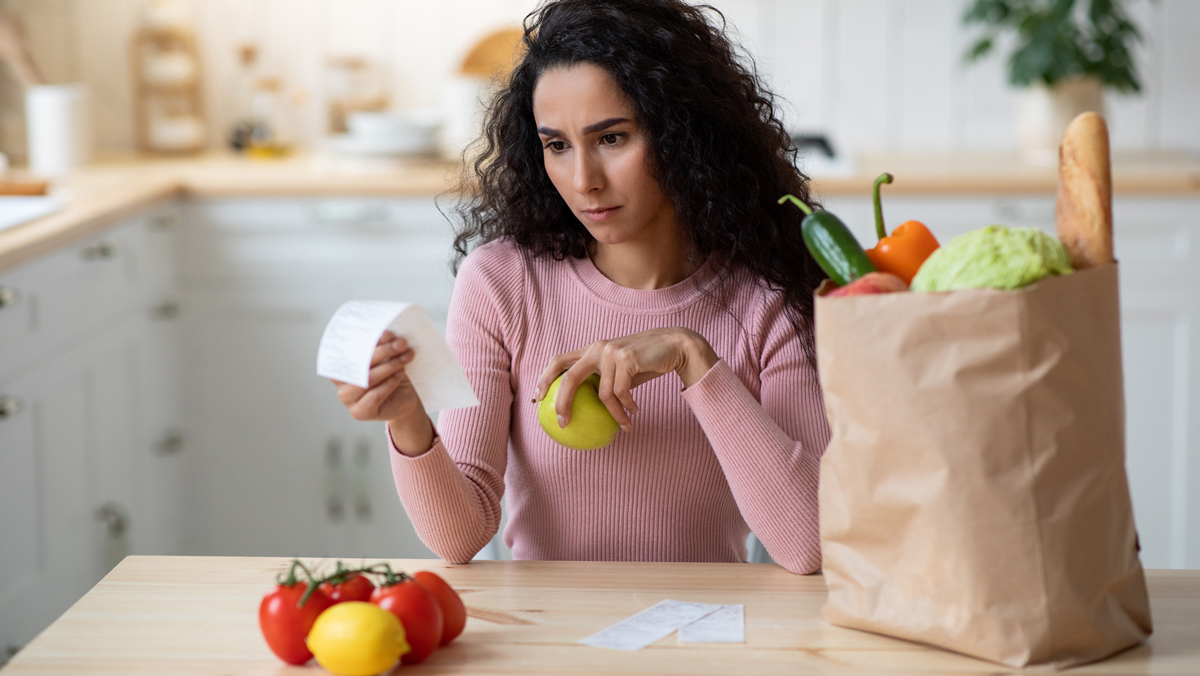 Higher food prices aren’t going away anytime soon given the array of interrelated factors that has led to inflation in both the category and the economy in general, although some are hopeful that the rise will at least level off, if not taper off, in the second half of 2022.

The Economic Research Service (ERS) of the U.S. Department of Agriculture reported that consumer food prices (for food consumed at home and away from home) were up 0.8% from August to September, and up 4.6% from the previous September, with similar figures—1.1% and 4.5%, respectively—for food eaten at home. The service predicted that food-at-home prices would rise between 2.5% and 3.5% for 2021, and between 1.5% and 2.5% in 2022.

In an article that noted overall prices rose 6.2% in October year-over-year, the largest inflation in three decades, the Washington Post quoted Bureau of Labor Statistics figures on the national average price of a dozen grade A eggs, which rose 29% to $1.82; a pound of chuck roast, up 29% to $7.40; and a gallon of milk, up 8% to $3.66. “The only thing that’s cheap is turkey, in terms of proteins,” Diane Swonk, chief economist at Grant Thornton, told the newspaper. “So go ahead and stick with that turkey for Thanksgiving.”

A Perfect Storm
Supply chain disruptions have led to skyrocketing inflation in shipping costs (up 300% year-over-year) as well as double-digit increases in commodity prices (up 33%) and energy costs (up 20%), according to a late October report from NielsenIQ.

“It’s a perfect storm, truly,” says Joan Driggs, vice president of content and thought leadership with market research firm IRI, which predicts continued food inflation of 8% in the first half of 2022, settling down to 4% in the second half of the year. “Commodity prices are way up; raw materials are more expensive. … There’s not only not enough labor at ports, but you have a shortage of truck drivers to get products where they need to go. It’s really a mess.” 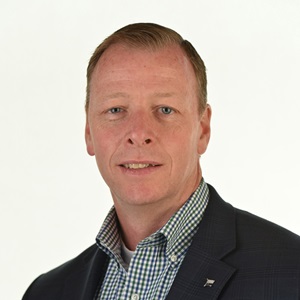 Doug Baker (pictured at right), vice president, industry relations, with FMI—The Food Industry Association, sees several factors leading to the run-up in prices, mostly relating to manpower and transportation. “Unfortunately, there’s no real rhyme or reason to the shortages,” he says. “One week, you’re dealing with a glue shortage. The next week it’s a nail shortage, to make pallets. The week after that, it’s a product sitting on a container ship waiting to be offloaded.”

The thicket has global roots, which will make it harder to unwind; for example, the ability to offshore production to markets like China and Eastern Europe has declined, says Bill Bishop, chief architect and co-founder of Bricks Meets Click. “We’ve had 30 years of very, very low inflation,” he says. “We’ve now swung at the global level.”

Nicholas Fereday, executive director, food & consumer trends with Rabobank, says inflation hasn’t been on food companies’ radar for some time. “I see the Unilevers and the Nestlés, the big food companies that in some way have to make public comments, say, ‘We’ve managed to do so much, but there’s more to come,’” he says. “Everybody is looking at their textbooks on economics and reminding themselves what ‘elasticity of demand’ means. How much can you raise prices before you lose customers?”

The tangled web won’t unwind very quickly, says Keith Daniels, partner and middle market advisor at Carl Marks Advisors. “I wish there was a silver bullet—a single issue that could fix it,” he says. “It’s permeated the whole vertical chain.” The shortage of truck drivers has risen from 50,000 before the pandemic to 80,000 now, for example. “And grocery stores, they’re struggling to find workers, too. … They’ve got to maintain their margins and their cash flow. There’s isn’t one issue here—it’s a totality issue.”

In the meat business, the labor shortage is probably the most significant factor although rising prices of inputs like corn, which costs 54% more than in August 2020 and peaked at 78% higher, also have played a role, says Chris Oliviero, general manager at Niman Ranch, a network of family farmers and ranchers. He cites shortages of truckers, plant workers, and restaurant workers. “That impacts every step of the supply chain,” he says. “I don’t see any end in sight, today. I’m not sure what it’s going to take to entice more people to enter the workforce.”

The CPG Picture
Kraft Heinz CEO Miguel Patricio told the BBC that consumers will need to get used to higher prices given that inflation has been “across the board.” He cited higher costs for raw materials, higher wages, and energy prices, in addition to the truck driver shortage.

During an investor call, James Snee, chairman, president, and CEO of Hormel Foods, said the company expects rising prices will help offset the higher costs in labor and other inputs. “Whether it was raw materials, packaging, freight and warehousing, labor, I mean you name it, we saw inflation,” he said. Deanna Brady, executive vice president-refrigerator foods at Hormel, noted that the marketplace will inform company decisions. “Our brands will tell us if we’re priced right,” she said on the investor call. “Our consumers will tell us if we’re priced right.” 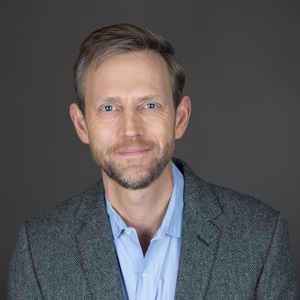 Fereday (pictured at right) says big brands like Nestlé will be able to pass on prices more easily than middle-tier or emerging brands. “It has a lot to do with the power of brands,” he says. “How much of this can our consumers take, and should we start looking to private label as our Plan B? Nobody’s panicking. They’re still optimistic that we’re at the last bit, and it will get better.”

Oliviero says companies like Niman Ranch have three “levers to pull” to cope with the situation: reduce costs, increase prices, or try to be more thorough in fully utilizing every part of the animal.” It’s really important that we’re aggressively focusing on each of those three,” he says. “Looking for ways to get cost out of the system is critical.”

Bishop believes CPG companies have the most to lose, with the current issues layered on top of the burgeoning dominance of Amazon and online retail in general, as well as the ability of other large retail chains to absorb cost increases and expand private label. “That shoe hasn’t hit the floor yet,” he says. “Most are saying, ‘We’re good enough, our products are good enough, that people will pay more for them.’ There’s going to be a very definite limit to that.”

Retail Reaction
On the retail side, Albertson’s CEO Vivek Sankaran told Yahoo Finance that he didn’t think consumers were changing buying habits just yet, even though the ERS data on prices for food eaten at home show that the increase is close to the 5% mark that conventional wisdom holds is the tipping point at which consumers begin to trade down.

Retailers are having to get very creative to distribute their goods and manage out-of-stocks, FMI’s Baker says. “You have to focus on what labor you have, from one specific activity to the next activity,” he says. “Turnaround time is extremely important. Let’s not have a truck sitting longer than it has to. Let’s get it unloaded so we can get back on the road.”

Premium products had been driving growth at retail, but value brands, including private label, might have a growth opportunity going forward, Driggs says. “As we gain mobility, and we’re going back to the store more often, people are shopping in club stores because they offer good value, larger quantities, and a lower price per ounce or volume,” she says.

As with CPGs, larger retailers and CPGs have a greater ability to pass along price increases, Daniels says. “Amazon, Walmart, and Kroger will be in a better position than local, independent grocers,” he says.

Consumer impacts will vary, Bishop notes. “A 5% increase, which is where I think we are today, is a really big hit if you’re already living paycheck to paycheck,” he says. “If you’re not, maybe it doesn’t matter nearly as much. With the income diversity that we have in our society today, it’s probably a tale of two cities, if you will.”

When Will It End?
Baker doesn’t expect food prices to come down until well into 2022. “There’s plenty of food in the supply chain; it’s just at the wrong point in the supply chain,” he says. “Getting it to the right point is taking longer than normal due to constraints with labor and equipment. Once that eases, prices will start to level off. It’s going to take a while to recalibrate.”

Driggs predicts prices will soften in the second half of 2022 as supply chains start to recover. “Packaging will go down when paperboard or aluminum become more available,” for example, she says. “I’m not sure when. It’s a wild card.”

Fereday notes that industry observers’ crystal balls haven’t performed so well of late. “The idea of the new normal returning to the old normal of 2% inflation forever certainly looks challenged,” he says. “People are expecting more inflation, in the high single digits, with a view toward it stabilizing next year. It is too soon to tell if it’s going to be permanent.”

Oliviero remains confident that food inflation will peak. “Nothing cures high prices like high prices. That’s just a fact,” he says. But labor will be the largest determining factor, along with advances in automation. “When you experience periods like this, what was previously thought to be impossible, or too expensive to make work, there’s now more incentive and more need to make it work,” he says.

“I don’t know that it’s a forever thing,” says Daniels of Carl Marks Advisors. “These things cycle. Some people are saying our best case is Q2. That’s pretty hopeful. … We’re going to continue to see challenges probably through the end of next year. Hopefully, next year at the holidays, at least part of the supply chain will have worked itself out.”

Nutrition, Food Security Research Should Be Evidence-Based and Inclusive October 3, 2022

Tactics ranging from bolstering local food systems to upgrading food product labeling were considered in panel discussions focused on Pillar 3 of the five-pronged White House National Strategy on Hunger, Nutrition, and Health, which was unveiled this week.

IFT 2022-2023 President Chris Downs discusses the importance of food during the holidays to connect people and the work being done to help mitigate food and nutrition insecurity.