In preparation for teaching his Packaging Materials class, Clemson University faculty member LeRoy Doar was reviewing equations used to calculate permeability for laminated materials using Hanlon’s Package Engineering textbook. He immediately noticed that the equation in the second edition (Hanlon, 1984) was different from that in the third edition (Hanlon, 1998). After checking other references, he asked other faculty in the nearby offices for their opinions to determine the correct equation.

We each cited different equations that claimed to deal with calculating permeability of laminates. Based on our conversation, we decided to consult a variety of packaging references, collect equations, and compare them by using the same data for each different equation. As we looked into this problem, it became obvious that other packaging and food professionals might also be confused as to which equation to use and how the data should be interpreted. 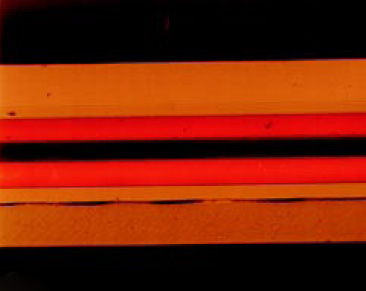 As we compared the variety of equations, we found that most of them were the same basic equation stated in slightly different ways. Other equations either accurately or inaccurately dealt with permeability and transmission rates to achieve the final answer. The confusion over these two terms is not new. In fact, it is so serious that there have been lawsuits that essentially centered on this basic issue. The key fact to keep in mind is that permeability data account for the thickness of the material and transmission rate assumes the thickness of the test sample. Both are useful depending on how you use the data. This article will help explain when to use the terms and clarify how the equations should be used. Since the food industry is the largest user of packaging materials (Fig. 1), we felt that food professionals should benefit most from this information.

Definitions
Before specific equations are discussed, it is important to define some of the terms and units used in the equations. ASTM Procedures E96 and F372 specifically address measurement of water vapor permeability and define commonly used terms associated with such tests (ASTM, 1994).

Transmission Rate TR is defined as the movement of a permeant in unit time through a unit area under specified conditions of temperature and relative humidity. The thickness is not incorporated into the definition but is implied to be the thickness of the test film sample.

Permeability P is defined as the movement of a permeant through a unit area of unit thickness induced by a unit vapor pressure difference between two specific surfaces under specific conditions of temperature and humidity at each surface. Also noted below the definition is the following statement, “Permeability is the arithmetic product of permeance and thickness.” The term “permeability rate” is also used incorrectly on occasion. The term permeability itself means “rate,” so saying permeability rate would be akin to saying rate rate.

Note that the main difference between the P and TR definitions is that thickness is mentioned in P but not in TR. Although many different units can be used to express TR and P, Table 1 shows the units commonly used in the United States. Delassus (1997) noted that the use of different units is sometimes the cause of confusion and provided a table to convert between the variety of units used in the industry and in different countries.

For calculation of multilayer structures, the partial pressures and the units associated with them are incorporated in the permeability data of the equations used. However, caution must be exercised with TR data if the data represent different systems. Units must be used in a consistent manner, and all units must be included for the appropriate data to be obtained from the calculations.

Permeance is a term often used interchangeably with transmission rate. The close relationship between these terms is best described by Robertson (1993), who defined permeance as the permeability coefficient divided by thickness of the film, which translates to the gas or water vapor transmission through the specific sample under test. Permeance can be used as a general term to describe the performance of a film and can be accurately used interchangeably with TR; but it should be used with caution, since it is often misused. In general, permeability is useful when comparing film materials with published data, and TR is useful for measuring actual film performance. 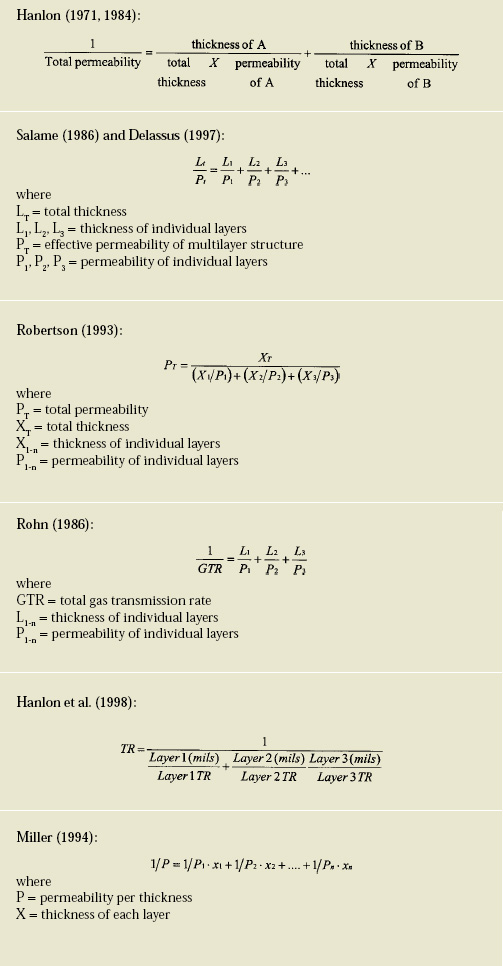 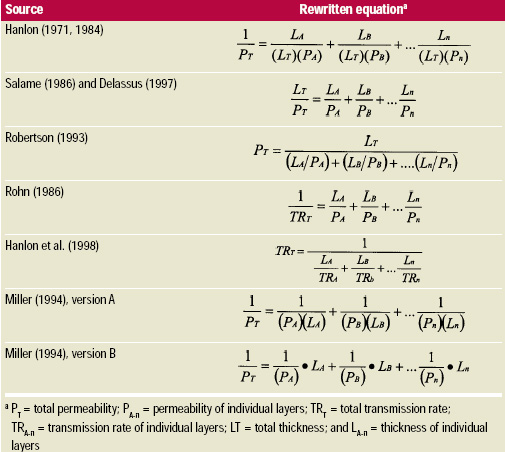 Some Equations Provide Different Answers
We reviewed eight textbooks and references, some of which were different editions of the same book. Six different equations were found, with one equation that could be interpreted two different ways. Each equation is shown in Fig. 2 exactly as it appeared in each of the sources. Note the variety of nomenclatures used that add to the confusion. Since different symbols were used for the equations, we rewrote the equations using standard symbols for easier comparison (Table 2).

A standard set of data (Table 3) was used to calculate permeability for each equation. All of the data used for calculations were obtained from the literature.

We performed five different calculations for each equation (Table 4). Calculations 1 and 2 were done to illustrate the effect of thickness. Water vapor transmission rate data was used for calculations 1 and 2 to show that the same effects occur with each equation regardless of whether water or oxygen transmission data are used. When one layer of 1 mil thickness is used (calculation 1), all the equations provide the same answer; but when thickness becomes a factor (calculation 2), different answers result.

This is the root of the confusion between P and TR. It is essential to remember this difference, if you are going to correctly use these terms. To convert from P to TR, you divide P by thickness (mils, microns, cm, etc.); to convert from TR to P, you multiply TR by thickness. If you’re going to use published data, P normalizes values for uniform thickness. If you’re obtaining instrumentally measured data, TR is most common.

Calculations 3–5 were done using oxygen permeability data. If the equation required oxygen transmission rate data, the conversion was made so it could be properly used in the equation.

Five of the equations—Hanlon (1971 and 1986), Salame (1986), Delassus (1997), and Robertson (1993)—provided the same answer and are basically the same equation written in slightly different ways. They all use permeability data and end up with a final answer in the same units. This is useful if you are using published data to calculate the theoretical permeability for a laminate, as many of the references intend for the equations to be used.

The equation provided by Rohn (1986) was different from the others because it uses permeability data for the calculation but yields an answer as transmission rate. Table 4 shows the answer converted to permeability to show that it can provide the same answer as other equations. Conversion was achieved by multiplying the answer by the total thickness. The advantage of this equation is that the final answer, if kept as transmission rate, makes it easier to compare to data provided from an instrumental test, and provides the barrier values for an actual laminate.

Hanlon et al. (1998) contains a typographical error and is a good example of confusing P and TR. It incorrectly uses TR in the denominator instead of P. The results are stated as a transmission rate. Results don’t come out the same if you use TR as indicated in the equation.

The equation provided by Miller (1994) was typeset in the text ambiguously and can be interpreted incorrectly as shown in version A. If this is done, the answer provided in Table 4 results. The incorrect interpretation of the Miller (1994) equation has thickness in the denominator and shows it being multiplied by P. Permeability is acceptable, but the thickness should be in the numerator. It can also be interpreted as shown in version B. This provides a correct final answer, but as transmission rate, not permeability as the equation in the text indicates it should.

• Calculating transmission rate from permeability data would be useful if you’re using published data and trying to compare them to instrumentally measured data or applying published data to design a laminate for a packaging application:

• Calculating permeability from permeability data would be useful if you’re using published data and trying to estimate and theoretical laminate materials:

• Calculating permeability from transmission rate data would be useful if you’re using instrumentally measured data from a lab and trying to convert them to data that fit the standard for published data more easily or using them for comparison with other calculated laminates:

When to Use P and TR
Confusion between P and TR exists, even among experts, textbook citations, and authors. Equations used to predict permeability or transmission rate could be an effective tool for estimating data, but only as long as they are used correctly.

Other factors that affect P and TR, such as environmental conditions, additives, and/or processing variations, should also be considered when comparing data. What we use for packaging applications is TR data to represent transmission through a total laminate. Permeability data are normalized for constant thickness to facilitate publication and comparison. The equations recommended above will allow you to calculate for your application and help alleviate any confusion.