From Ricky Martin to the Lambada, Americans are loving everything Latin, and that includes foods and beverages! 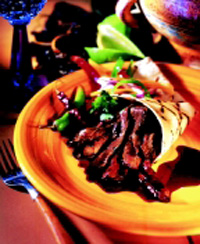 Penton Food Service Media reports that “Nuevo Latino” is currently the top influence on noncommercial foodservice menu development. Its future looks strong. In a January 2000 survey conducted for Restaurant Business, 56% of high school students said they have already tried Latin food, and an additional 29% said they will try it in the future.

If multicultural influences continue to have a dramatic impact on America’s food behavior, then Latin it is. The 1999 U.S. Census Bureau projects that the United States Hispanic population will reach 41.1 million, or 14% of the total U.S. population by 2010, an increase of 9.7 million people, up 31% from 1999. In comparison, African-Americans will reach 37.5 million (up 4.4 million, or 13%), and Asian, Pacific Islanders will reach 14.4 million (up 4.1 million, or 40%). After 2020, the Hispanic segment will add more people to the U.S. population than all other racial and ethnic groups combined!

Defining Latin cuisine is difficult. It’s a bit like lumping together the diverse cuisines of Western Europe. Restaurant industry terminology credits both South American and Caribbean cuisines, along with those of Cuba, Brazil, Argentina, and, to some extent, Peru, as exerting the greatest influence.

Despite the generous use of chiles, Latin food is not always “hot.” Citrus fruits and assorted vinegars are also integral to Latino cooking. Mojo, probably the most ubiquitous of the vinaigrettes, is made with herbs, garlic, and lime juice. Sofrito, a simple mixture of olive oil, peppers, onion, and garlic, is used in rice and meat stew dishes.

Latin beverages will be no exception. American bartenders will be mixing popular cocktails like the mojito (Cuban rum, lime, and mint), the Brazilian caipirinha (cane liquor and lime), and Pisco sour (Peruvian brandy and lemon). Moderately priced Spanish, Chilean, and Peruvian wines will also get mass market attention.

From café con leche to arroz con pollo, Latin foods are “livin’ la vida loca.” The only thing more difficult than creating the recipes themselves is educating the people who will eat them—as most Americans still equate Latin food with Mexican. But that will change, too. There really are no boundaries to Latin foods, whether this means using authentic dishes with local ingredients or incorporating Latin ingredients to tweak traditional recipes. Latin foods are here to stay.