Mycoprotein is the principal ingredient in the line of foods sold under the Quorn™ brand name. It is the best selling meat-alternative brand in the world, enjoyed by more than 20 million consumers in the United Kingdom over the past 16 years. The Quorn line of products is expected to be available in the United States later this year, after the expected approval this summer by the Food and Drug Administration. 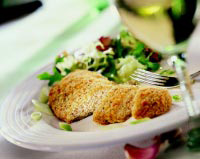 Consumer research with current customers in Europe and prospective ones in the U.S. show that taste is what sets these foods apart from other meat alternatives, such as soy-based foods. Their unique nutritional profile adds to the appeal built on taste and the availability of an additional meat alternative previously unavailable to the health-conscious American.

The products are positioned as a good source of protein and fiber, and as products lower in fat and saturated fat than their meat equivalents. On a weight-for-weight basis, the mycoprotein has almost as much protein as an egg, more fiber than a baked potato, two-thirds the fat of skinless chicken breast, and no cholesterol. All the products are quick and easy to prepare and provide great meal solutions for the whole family.

The Beginning
In the late 1960s, Ranks Hovis McDougall (RHM), a major British food company, began carrying out the initial research and development on mycoprotein. The chairman, Lord Rank, directed his research scientists to identify a “new” food source that he hoped could help eliminate a potential world food shortage, which many worried about at the time. After an extensive worldwide search, Fusarium species of fungi was discovered in the soil next to wheat fields in Marlow in the UK. Researchers quickly recognized that it could be an efficient and effective source of protein—what we now call mycoprotein—with great promise.

Through the mid-1970s, extensive work was undertaken to test that the organism was fit for human consumption and that it could be grown at a scale that would be economically viable to produce and sell. The process was furthered by a joint venture between RHM and ICI, a major international chemical company with a knowledge and understanding of fermentation. Extensive safety testing was implemented, and in 1985, the UK Ministry of Agriculture, Fisheries and Food granted approval for safe human consumption.

Food development work in the 1980s focused on perfecting the chicken and beef-style texture and tastes in the basic ingredient formats. In the 1990s, Marlow Foods, located in Marlow, England, was created as a joint venture by ICI and RHM to commercially develop the new food. Marlow focused research efforts on developing new, convenient varieties and adapting products to specific market tastes. Many new products were introduced between 1995 and 2000 in the UK and other European countries, including burgers, nuggets, sausages, prepared entrees, deli slices, cutlets, and ingredient chicken-style tenders and beef-style-grounds.

European Expansion
In 1985, the first Quorn product—Savory Pie—was introduced with the UK-based retailer J. Sainsbury. Between 1985 and 1993, while production capabilities were limited, the foods were marketed only in the southeast region of the UK. The commissioning of a new fermenter and food processing facility in 1993, which facilitated higher capacity, allowed the brand to be marketed nationally in the UK and eventually to roll out across central Western Europe (Belgium, Holland, Switzerland, Ireland, Sweden, and France).

Before 1993, sales were less than $3 million per year. After extensive television advertising of the national launch in the UK, awareness of the brand rocketed to 80% of all households. Sales climbed rapidly, and between 1994 and 2000, the company’s compound annual growth rate was 37%. Sales in 2001 are expected to be in excess of $150 million. Success has been achieved through clear consumer positioning, mainstream retail distribution, and great-tasting, good-for-you products in a widely available line. Annually, one in five households try the product in the UK, which is more than double the penetration rate of the number-one U.S. brand of meat alternative.

Lessons from the European Marketing Efforts
When Quorn foods become available in the U.S. later this year, the products will be in frozen form and will initially include ready-to-eat chicken-style nuggets, patties, and cutlets, plus a variety of entrees such as lasagna and fettuccine Alfredo. In addition, They will also be available in ingredient form as frozen beef-style grounds and frozen chicken-style tenders for consumers to enjoy in their favorite recipes. Eventually the line will be extended to include more entrees, sausages, burgers, and cold cuts.

Expanding the company’s comprehensive pre-market research and planning, the launch’s marketing efforts will support the brand at introduction with print and broadcast advertising, as well as public relations to attract media attention. In-store sampling, consumer and trade events, and Web-based promotions will complete the foundation for marketing. In preparation for the launch, the products premiered this year at the Food Marketing Institute’s show in Chicago and the Natural Products West show in Anaheim, Calif.

Marketing plans for the approaching U.S. launch will build on a number of key things learned during the early marketing European experience:
• The meat-alternative category needs to be promoted. The Quorn brand will be positioned toward mainstream consumers, but the meat-alternative category itself needs to be promoted to them, as well. European consumers were initially cynical about meat-free food as a result of unfavorable experiences with soy burgers and meat extenders.

The company revolutionized the category in Europe by introducing a wide line of products that fit an array of eating occasions, from breakfast to lunch, and afternoon snacks to dinner. The line of meat-free choices rose above soy veggie burgers. Marketing emphasized a taste advantage over the category competition.

• Partnerships with retailers are needed. The mycoprotein products were developed with key retail customers in the UK like J. Sainsbury, Safeway, and Albert Heijn. Products were adapted to customer requirements and merchandised in high-profile, high-traffic areas of stores near frozen and refrigerated aisles. Retailers and the company mutually benefitted from the high interest and sales growth

• Relationships with the media are needed. The company has worked right from the start in all countries the product is marketed in to inform the consumer media about this new food choice. New products, recipes, nutrition information, and marketing campaigns have depended primarily on attention from print and broadcast media. The coverage has provided consumers with value-added, credible information and the knowledge to make informed eating choices.

Gearing Up for the U.S. Launch
The line has been extensively researched with U.S. consumers in consumer focus groups and in large-scale national consumer research tests. The mycoprotein products will be positioned as a great-tasting, meat-free line of good-for-you products. They will be promoted as high-quality, convenient product choices and will be available in frozen food aisles near existing meat-free products such as Gardenburger and Boca Burger.

Consumer research has told us that health is the key reason consumers want to try meat-alternative products. They also want to be convinced that the product is going to taste great, which is why the marketing emphasis is on in-store and event demonstrations. The packaging will be bright with a sunshine orange glow, full of flavor and confidence, not “veggie green-colored” or “diet-white.”

There are more similarities than differences between the U.S. and UK marketing programs. Positioning, educational communications, and demonstrations are key in all markets. A significant difference, however, is that the target audience in the U.S. is women 25–65 years old, compared to 25–45 in the UK. Consumer research has shown that there is a large group of empowered, nutritionally aware older women who would be prepared to try new foods. In the UK, this group is much more conservative.

Whenever a group has previewed the taste of the mycoprotein foods in the U.S., few have protested. The taste is ranked superior. The health benefits are clear. And the pleasure of eating will be with American consumers when the product launches later this year.