Membranes have become important tools in food processing, permitting ultrafiltration, microfiltration, and reverse osmosis with selective polymer membranes. The goal may be concentration, clarification, or fractionation. 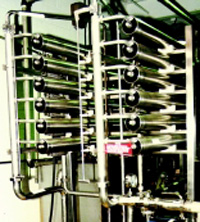 Membranes differ in their apparent pore size, their affinity for dissolved and suspended matter, their materials of construction, their costs, and their durability. Early reverse osmosis membranes were made of cellulose acetate, valued for its ability to reject dissolved salt and permit water to pass through. Reverse osmosis is now a well-accepted process for desalinating sea water and brackish water for drinking and agriculture.

Other polymers have been applied which are more durable than cellulose acetate and can have precisely controlled molecular cut-off points, permitting fractionation of suspended and dissolved molecules.

Membranes are available in flat sheets, relatively large tubes (0.5-in diameter), hollow fibers, and spiral-wound modules. Flow is usually parallel to the  membrane surface at relatively high velocity to minimize the buildup of a film of concentrate at the surface.

Membrane equipment is typically fabricated in standard modules, with multiple modules connected in series or parallel to provide sufficient surface area for a given flow rate. The more porous the membrane, the higher the flow through it at a given pressure driving force. Rates can vary from 5 to more than 100 gal/day/ft2. Of course, at the higher rates, through more-porous membranes, less material is removed and that removed is typically of higher molecular weight.

Cheese whey, in particular, is often processed with membranes. Steve Messinger (phone 617-926-2510), Business Manager of the Food Center of Excellence at Ionics, Inc., Watertown, Mass., described one especially interesting process based on whey.

Often, he said, whey is concentrated using ultrafiltration to increase the protein content. Whey protein concentrate is a useful food ingredient. However, another valuable component of the whey, lactose, is discarded with the minerals and water after ultrafiltration. It is difficult to concentrate the lactose and remove the minerals from the permeate, as must be done for infant formula and pharmaceutical applications.

A complex membrane process developed by Ionics and installed at Intersuero in Spain converts the lactose to L-lactic acid and recovers it, as well as a whey protein concentrate. The steps (Fig. 1) include ultrafiltration to concentrate whey protein, reverse osmosis/diafiltration to concentrate and demineralize lactose, fermentation using a unique Lactobacillus strain which selectively produces L-lactic acid instead of a mixture of L- and D-lactic acid, microfiltration to remove bacterial cells, electrodialysis to further demineralize lactic acid, ion exchange to reduce salts further, carbon column to remove color, and evaporation to 80% solids. 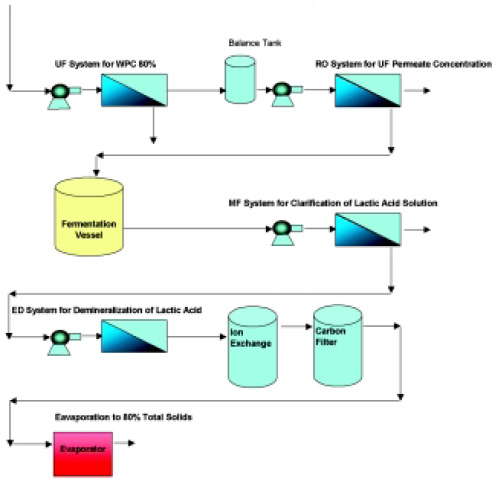 Ionics began as an electrodialysis equipment supplier and diversified into membrane processing. They supplied the entire process as described above, purchasing those units that they do not manufacture themselves, such as the evaporator. They feel that this example illustrates the concept of using as much of a feed stream as possible and raising the value of recovered components by increasing their purity. Apparently, the L-lactic acid produced by the special bacterium is key to justifying all the purification steps.

Ionics is becoming exclusive distributor of Corning ceramic membranes for food and beverage applications. Corning uses other vendors for wastewater applications. There are two types of ceramic membranes, with 0.2- and 0.01-μ pores. The larger pores are still sufficient to reject colloidal material and bacteria, and can therefore be used to clarify and sterilize beverages. The 0.01-μ pore membranes reject molecules whose molecular weight is above about 250,000 Dalton, which includes many proteins, micelles, and haze-forming particles.

The initial focus is on fruit juices, such as apple and cherry and blends, and drinks based on such juices. The membranes have been challenged with spoilage microorganisms and found to give a 5-log reduction. If the same reduction can be demonstrated for pathogens such as Escherichia coli, the technique could be used to satisfy the juice HACCP requirements and still retain a fresh flavor.

Most juices are pasteurized with heat, which can give a cooked flavor. The juice resulting from membrane sterilization, of course, is clear, which is desired in many juices and juice-based products.

Membrane sterilization is not applied to pulpy juices, such as citrus, though perhaps pulp and serum could be treated separately, with only pulp receiving heat treatment, and recombined. Unless enzymes are inactivated, added pulp may settle quickly, so that approach may be doomed. Nonetheless, the ceramic membranes hold promise. In particular, they can operate at higher temperatures than polymeric membranes and need to be cleaned less frequently.

Other applications Ionics will pursue include cold sterilization of beer and clarification of wine.

A typical module holds 120 ft2 of membrane, used in a cross-flow scheme. One module produces 5–10 gal of permeate/min.

PCI Membrane Systems, Inc., Milford, Ohio, is promoting use of a membrane system called Reco-CIP to treat clean-in-place solutions so cleaning chemicals can be recovered and reused rather than discarded because of buildup of fats and protein soils. PCI’s General Manager David Pearson (phone 513-575-3500) described the breakthrough as based on a membrane that can tolerate the acids and bases used in CIP systems. Such systems also operate at elevated temperatures, up to 140oF. The PCI system (Fig. 2) uses a tubular configuration and can run 22 hr between cleaning. PCI claims that its cost can be recovered in less than a year, depending on volume, the value of chemicals, and the value of reduced waste disposal.

It has been common to recover CIP solutions, but usually some fresh chemical was added and some used solution discarded to maintain strength and eliminate suspended soils. By filtering out the soil, less make-up chemical is needed, less chemical is discarded, and loads on waste treatment systems are reduced. Cleaning is typically the major source of waste in plants such as dairies and ice cream manufacturers, which are major users of CIP systems.

PCI also supplies spiral-wound and hollow-fiber configurations of membranes for other services, with no suspended matter, which would quickly foul
these configurations.

Membrane processing is close to being a mature technology, with many routine applications, but new materials, such as ceramics, and new synergies with biotechnology, exemplified by the whey fractionation process, demonstrate that the potential of membranes is far from exhausted.

PRODUCTS & LITERATURE
Dust Collection is the topic of an 80-p booklet that discusses all types of dust collection equipment, as well as hazards, the impact of moisture in dust collectors, and future trends. For a copy of “The Real Dirt on Dust, A Scientific Review of Dust Collection,” contact Scientific Dust Collectors, 4101 W. 126th St., Alsip, IL 60803 (phone 708-597-7090, fax 708-597-0313, www.scidustcollectors.com).

Portable Sanitizers, the KleenJet™ Steamer Ultra 600 and Ultra 800, clean, sanitize, and degrease using steam produced from ordinary tap water and no chemicals. The portable, self-contained units produce an unlimited flow of hot, low-moisture vapor at pressures up to 120 psi and temperatures up to 330°F. The steamers destroy most foodborne bacteria on food-contact and other surfaces. They are also effective in eliminating mold, and killing insects, eggs, and larva. For more information, contact Daimer Industries, Inc., 407R Mystic Ave., Bldg. 34, Medford, MA 02155 (phone 866-783-2600x1).