November 1, 2003
Share +
Extensive effort has been directed in recent years toward controlling the release of active ingredients in foods and beverages to prolong their shelf life and the sensation of flavors in the mouth during consumption. Various methods and compositions have been described for providing enhanced stability and better control of the release of active ingredients and flavors in food products. This article describes various encapsulation methods and shows how a novel encapsulation system overcomes their drawbacks.

Encapsulation Techniques
Spray drying accounts for the majority of commercial encapsulated materials in food products. The process is relatively well known, and the encapsulated product can be incorporated into dry products and powders. The encapsulated actives are released upon contact of the product with water, which dissolves the spray-dried capsules.

An alternative process is melt extrusion. In this process, a melting system such as an extruder is employed to form the carrier melt in a continuous process. The flavor or other ingredients to be encapsulated is either mixed with or injected into the molten carbohydrate carrier. The payload of active ingredients, flavors, and sensory markers such as cooling agents, heating agents, and even sweeteners in these systems is relatively low, typically below 20%. These systems can be incorporated into dry products or powders, and the encapsulated active ingredients will be released upon contact of the product with water.

Another technology, coacervation, was commercialized in the 1950s and has found wide use primarily in the pharmaceutical, cosmetics, fragrance, and specialty products industries. Complex coacervation is the process by which two or more oppositely charged macromolecular colloids are used to form particulates. However, the relatively high process costs, sensitive multistep batch process, regulations limiting the number of polymeric agents which can be used in food preparations, and the difficulty in dealing with encapsulates having both aqueous and lipid solubility properties—as well as the sensitivity of these systems to high shear—have drastically limited the application of coacervation for flavor encapsulation in the food industry.

Coating with fat is another encapsulation technique that has been employed. In this technique, ingredients are coated with fat via a fluidized-bed technique. This technique suffers from serious shortcomings, such as exposure of the active agent to a vigorous hot air stream that may result in active ingredients either volatilizing or oxidizing under such conditions. This air contacting may occur over a long time period, since the rate of fat addition must often be slow, being determined by the heat load the air stream can carry away. This also limits the overall productivity of fluidized-bed techniques, which in turn influences processing costs and ultimately commercial utility. In addition, the protection afforded by fat coatings may be easily lost when the fat-coated particle is exposed to temperatures above the melting point of the fat.

Spray-chilling is another form of encapsulation practiced commercially. This process begins with mixing a liquid flavor into a molten fat to create a solution/dispersion. The resulting mixture is then atomized into a chamber where it is contacted with an air stream cool enough to cause the atomized droplets to solidify, forming a crude encapsulated product. The major drawbacks of spray-chilling include interactions between the fat and the active ingredient, volatilization of lipid-soluble materials over time, and loss of volatile materials during processing.

None of the encapsulation methods and compositions described above have the ability to release multiple active ingredients in a consecutive manner or to provide a long-lasting organoleptic perception or mouthfeel.

Novel System Developed
We have developed a multicomponent delivery system (Shefer and Shefer, 2003a, b, c) that overcomes the drawbacks of the above encapsulation systems. This system, MultiSal™, delivers multiple active ingredients that don’t normally mix well, such as water-soluble and fat-soluble ingredients, and releases them consecutively. It enhances the stability and bioavailability of a wide range of nutrients and other ingredients, controls their release characteristics, and prolongs their residence time in the oral cavity and thus prolongs the sensation of flavors in the mouth. 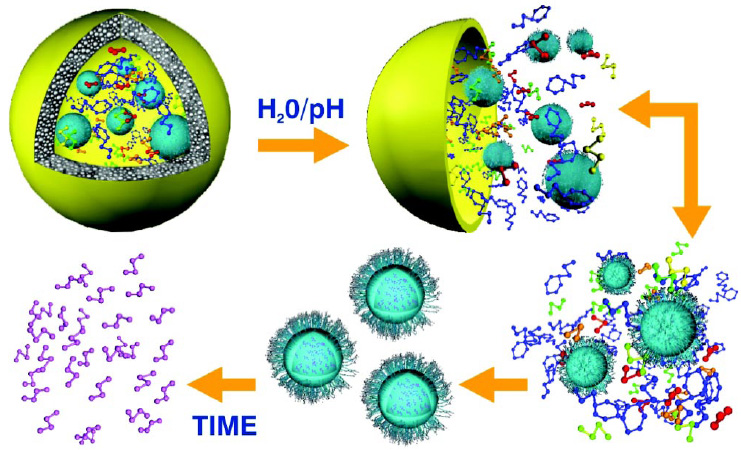 The nanosphere surface can include a moisture-sensitive bioadhesive material, such as starch derivatives, natural polymers, natural gums, etc., making them capable of being bound to a biological membrane such as the oral cavity mucosa and retained on that membrane for an extended period of time. The nanospheres can be localized and the target ingredient encapsulated within their structure to a particular region, or a specific site, thereby improving and enhancing the bioavailability of ingredients which have poor bioavailability by themselves. Ingredients that have high water solubility, such as vitamin C, usually have low bioavailability. Enhancing the hydrophobicity of these ingredients enhances their bioavailability.

In-vitro tests have shown the ability of the nanospheres to adhere to human epithelial cells, such as those in the oral cavity. 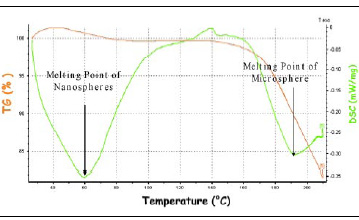 Differential Thermal Analysis (DSC) combined with Thermometric Analysis (TGA) are used to analyze the thermal properties and stability of the system. The DSC-TGA chromatogram (Fig. 2) shows that the product is thermally stable up to the point where degradation of the moisture-sensitive microsphere begins (160°C). The encapsulated nanospheres melt at 65°C, but they retain the active ingredients and sensory markers that are encapsulated within their structure, up to full degradation of the moisture-sensitive microsphere at 160 °C.

Benefits
The encapsulation system has numerous benefits:
• Ease of Handling. The system can be utilized to transform volatile liquids such as flavors into a powder, which are in many cases easier to handle.

• Enhanced Stability. The system can be utilized to isolate active ingredients as well as flavors that may interact with the other food ingredients. This provides long-term product shelf life.

• Protection Against Oxidation. The microspheres have very low surface oil (less than 0.5%) at very high payloads (30–40%) compared to conventional spray-dried particles utilizing materials such as gum arabic or starch.

• Retention of Volatile Ingredients. The moisture-sensitive matrix provides excellent retention of highly volatile ingredients, such as flavors, over an extended period of time to reduce the flavor loss during the product shelf life.

• Taste Masking. Unwanted taste can be masked by preventing interaction between the active molecule and the oral mucosal surface. The nanospheres are hydrophobic and can prevent bitter ingredients encapsulated within their structure from going into solution and interacting directly with taste receptors.

• Moisture-Triggered Controlled Release. As discussed above, the microspheres dissolve in the presence of water or saliva to release the active ingredients or flavors, thereby providing a high-impact flavor “burst.”

• pH-Triggered Controlled Release. Ingredients can be encapsulated in the microspheres to enhance their stability during the product shelf life and to release them when needed or upon food consumption. For example, citral can be stabilized in a fruit juice at acidic pH and released in the mouth upon drinking. This pH-triggered release was initially designed to deliver drugs to different regions of the gastrointestinal tract.

• Heat-Triggered Release. The hydrophobic nanospheres are temperature sensitive and can be utilized to release active ingredients and flavors at a certain temperature, e.g., upon heating in an oven or microwave oven or addition of hot water for hot drinks and soups.

• Consecutive Delivery of Multiple Active Ingredients. Two or more ingredients that would react with each other if put together can be separated and provided consecutively by placing one in the nanosphere and the other in the microsphere. An example is encapsulation of folic acid and iron that work synergistically. Other examples would be the delivery of one flavor after another, or the delivery of a flavor or sensation (in the microsphere) to indicate that the active ingredient (in the nanospheres) has been delivered.

• Change in Flavor Character. Encapsulation of a flavor in the nanospheres that is different from the flavor encapsulated in the microsphere can provide a perceivable change in the organoleptic perception in response to moisture during the use of the product.

• Long-Lasting Organoleptic Perception. As a result of the bioadhesive properties of the nanospheres and their residence in the oral cavity, flavor perception and mouthfeel can be extended over a longer period of time.

• Enhanced Bioavailability and Efficacy. As a result of their hydrophobic/lipophilic nature, the nanospheres can enhance the bioavailability of various active ingredients, such as vitamins, nutrients, and other biologically active agents encapsulated within their structure.

Shefer, A. and Shefer, S. 2003a. Biodegradable bioadhesive controlled release system of nano-particles for oral care products, U.S. patent 6,565,873 B1.