These days, you can’t walk through a grocery or convenience store without spotting at least one low-carb/high-protein product. Whether it’s a beverage, nutrition bar, snack, or baked good, this latest consumer demand has certainly affected the food industry in a big way.

Opinion Dynamics Corp., Cambridge, Mass., recently conducted several studies on the low-carb trend (www.opiniondynamics.com/lowcarb.html). Based on the results of two separate surveys totaling 1,800 completed telephone interviews conducted in December 2003 and January 2004, approximately 11% of the public are currently on a diet that restricts carbohydrates; 20% have tried such a diet in the past two years; and approximately 19% of those who are not currently on a low-carb diet may try one in the next two years. 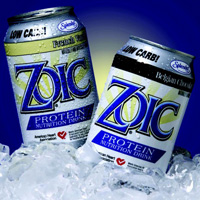 The low-carb lifestyle has spurred a plethora of new low-carb products. According to market research firm Mintel, Chicago, Ill., the United States has seen 375 new products with low-carb claims introduced through May this year. This is substantial compared to the 289 low-carb products introduced in all of 2003.

So where do proteins fit into all of this? From a formulation standpoint, reducing the carbohydrate content of a product results in the addition or increase of other ingredients, namely, fiber, fat, high-intensity sweeteners, and proteins. Depending on the protein ingredient, it can provide emulsification, solubility, gelation, or foaming properties. Low-carb diets typically recommend increasing protein intake. In addition, proteins are essential nutrients for the human body. So from both a formulation side and a nutrition side, proteins offer a win-win situation.

Although health experts debate over the benefits and risks of high-protein diets, products touting their protein content are becoming increasingly popular among consumers. A closer look at these products reveals that there are two main protein types used: soy and whey. They offer benefits beyond general nutrition, such as promoting good heart health, aiding in the prevention of cancer, and aiding in weight loss.

Soy Protein Benefits
Total retail sales in 2003 for the U.S. soyfoods market hit the $4.0 billion mark, increasing by approximately 10% from $3.65 billion in 2002, according to a report by Soyatech/SPINS (2004). Categories that continue to show strong growth are soy-based energy bars, up 12%, soymilk beverages, up 10.6%, and soy yogurt, up 23.6%. Chips and snacks, cookies and snack bars, and shelf-stable juices and functional beverages with soy were cited as up-and-coming categories for soy, all growing by more than 100% in 2003.

“Soyfoods and soy protein–fortified foods continue to make their way through the supermarket aisles,” said report author Peter Golbitz. “New and emerging categories such as new meat alternatives, frozen entrees, nondairy foods, private label products and low-carb foods with soy are going to continue to fuel industry growth and development for the next few years.”

The popularity of soy is due in large part to the Food and Drug Administration–approved health claim linking soy protein to a reduced risk of heart disease. This health claim, approved in 1999, was based on studies showing soy protein’s value in lowering levels of total cholesterol and low-density lipoprotein (LDL).

A new study from researchers at the Jean Mayer USDA Human Nutrition Center on Aging at Tufts University (Desroches, 2004) provided insight on how soy protein may help lower LDL cholesterol. The team looked at the effect of the soy protein on the particle size of LDL—a larger LDL particle size is associated with lower risk of heart disease. They examined the outcome of soy protein diets, either enriched or depleted of soy isoflavones, compared to common sources of animal protein, with and without added isoflavones.

In addition to heart health, soy protein may also play a role in aiding in the prevention of cancer. In fact, FDA is currently reviewing a health claim petition regarding the consumption of soy protein–based foods and a reduced risk of certain types of cancer, including breast, prostate, and colon cancer. The claim, presented to FDA by The Solae Co., St. Louis, Mo., focuses on 58 studies supporting the relationship between the consumption of soy protein–based foods and the reduced risk of developing these types of cancer.

A new study from the University of Missouri–Columbia (Guo et al., 2004) showed that soy protein may help reduce the number and size of tumors associated with colon cancer. Researchers fed female mice five different diets, then followed their progress for a year. The five diets were designed to compare the effects of specific ingredients.

Whey Protein Benefits
Whey protein’s benefits are increasing in consumer recognition as research continues to uncover the nutritional properties of this dairy-derived protein. Already known in the sports nutrition arena, whey protein is making its presence known in protein-touting products. More than just a sports aid, whey protein has been linked to benefits in weight management and heart health, according to Dairy Management Inc.™, Rosemont, Ill.

• Weight Management. At the Innovation Forum 2004 sponsored by DMI, Professor Donald Layman of the University of Illinois discussed the role of dairy proteins in weight management. He highlighted the role of the essential amino acid leucine in improving body composition. High-quality whey protein is rich in leucine, he said, which can help preserve lean muscle tissue while promoting fat loss.

The trial enrolled 30 generally healthy individuals with mild/moderate hypertension. Participants were randomized to 20 g/day of either hydrolyzed whey protein or unmodified whey protein and were asked to not make lifestyle changes throughout the six-week trial.

The future is bright for these two nutritionally powerful proteins. Whether or not low-carb/high-protein diets are here to stay, soy and whey proteins will pack a healthy punch into nutritional foods.