According to many of the financial wizards observing and analyzing packaging, steel and aluminum are expiring, although their demise might require another few—or many—decades. Glass continues to survive but not necessarily thrive in the face of the onrush of plastics. Steel food cans maintain their market share but don’t grow, as flexible laminations, paperboard laminations, and plastic bottles and cans erode their growth. 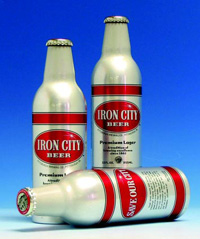 And the dominant aluminum beverage can—more than 100 billion sold annually in the United States alone—faces attacks from the inexorable plastic. Among the responses by the aluminum-can industry are size, decoration, surface texturing, and shaping—not exactly new, but now more visible and interesting. One of the approaches is the aluminum bottle, loosely defined as an aluminum can in which the diameter of the opening is much smaller than that of the body.

Fabrication of Aluminum Cans
Aluminum is a ductile and malleable material that is about one-third as heavy as steel. Because of its relative ease of formation, the flat sheet may be drawn into shapes. There are three methods for making two-piece aluminum cans: single-draw, for shallow-profile cans such as for pet and seafood, in which the height is less than the diameter; draw-and-redraw; and draw-and-iron, used for carbonated beverages. In any of the drawing processes, the aluminum flows by rearrangement of the crystal structure under compound stresses without metal rupture.

• Single-Draw. In this process, sheet metal is formed into a cylinder by a punch drawing it through a die. The process reduces the diameter at constant thickness, so that the surface area of the drawn part is nearly equal to the surface area of the blank from which it was formed. The diameter of the cup produced in the initial draw may be further reduced by a similar redraw with a draw sleeve between the punch and inside diameter of the cup.

• Draw-and-Redraw. In this process, the sheet is coated and decorated, blanked and formed into cups, and redrawn one or more times, depending on the height-to-diameter ratio; then the base is formed, necked, and flanged. Necking or reducing the diameter of the end opening markedly reduces the amount of aluminum and hence the cost.

• Draw-and-Iron. In this process (D&I), a cylindrically drawn cup is redrawn by the ironing punch, which does not precisely fit the punch diameter. The redrawn can is forced axially through a set of ironing die rings whose diameters progressively decrease, creating a gap with the punch that is smaller than the wall thickness of the redrawn cup. This results in a reduction in wall thickness at a constant diameter.

The D&I process for production of carbonated beverage and beer cans consists of: lubrication of the sheet being unwound from a coil; blank and cup draw; redraw; wall ironing; dome (bottom) forming; washing; surface treatment; coating inside and out; necking and flanging; and decoration. The bottom thickness of a D&I can is the same as that of the starting disc, so the thickness of the walls is considerably reduced.

The thin wall of the D&I can generally restricts its use to beverage and food products and processes that do not subject the can to severe thermal stresses and that offer some internal support such as internal carbonation. With noncarbonated beverages, nitrogen gas is incorporated to provide counterpressure and to reduce internal oxygen content.

In impact extrusion, an aluminum slug is located on a striking surface or anvil. A punch strikes the slug with great force so that the aluminum metal literally flows like a liquid straight up the outside of the punch, forming a cylindrical shape. The can’s shoulder is formed during the process. Impact force work-hardens and thus stiffens the metal. The finishing processes include rolling and curling the opening to receive a roll-on metal screw closure or to permit affixing a plastic fitment over which a plastic closure may be screwed. Interiors are coated after extrusion to protect the interior of the can from the contents and vice versa. More information on these processes is available in the third edition of Walter Soroka’s book, Fundamentals of Packaging Technology, published in 2002 by the Institute of Packaging Professionals, Naperville, Ill. (www.IoPP.org).

• Shaped Cans. Shapes beyond straight-wall (except for the necks) cylinders are formed by expanding portions of the walls. For example, the cylindrical can may be placed over an expanding chuck or mandrel that opens outward, expanding the can walls into the desired shape; or the can be filled with water under pressure to force the walls into a new shape; or air may be injected to “explode” the ductile aluminum into the new shape. (Steel cans may also be shaped by some of these methods.)

Among the shapes that have been in commercial distribution are beer barrel, embossed surfaces, and Coca-Cola’s ill-fated mid-1990s venture into rendering the 12-oz can into the classic hourglass, wasp-waist shape (evidently not enough consumers became enamored with the idea to persist in purchasing the can).

The latest visible manifestation is a revival of the truncated 8-oz cylinder to provide reduced portions of carbonated beverages.

The ability to custom decorate cans is fascinating. My portrait was reproduced on two-piece aluminum cans by one of the major can makers, using digital photography plus electronic transmission to automatic offset in-the-round printing plate–making. The notion of alternative and distinctive appearance is sufficiently attractive, however, to warrant continued investment.

Aluminum Bottles
Because of the manufacturing process, aluminum bottles are inherently stiff and heat resistant. Internal pressurization is not required to maintain the shape, which is not unlike that of a glass or plastic bottle. Because of the wall thickness, hot filling does not collapse the side walls, but nitrogen headspace is still desired to retard oxidative biochemical deterioration.

External decoration may be by in-the-round offset printing used for conventional cylindrical cans or by rotogravure reverse-printed shrink-film labels, which are becoming common for plastic bottles and occasionally for metal cans.

Like many plastic–metal combination structures, the aluminum bottle resembles plastic sufficiently to suggest the all-plastic “feel” to consumers but with rigidity not experienced with plastic.

Two-piece aluminum bottles derived from tube and pressurized can engineering are hardly the sole versions. In Japan, Daiwa Can developed a three-piece type, with tubular body, closure, and seamed-on aluminum bottom. The structure was engineered as one response to the polyester bottle for beer packaging (which still has not happened). An interesting aspect of the Japanese “bottle can” is that the sheet from which the structure is fabricated is a lamination of polyester film onto aluminum sheet. The closure is produced from aluminum stock lined with low-density polyethylene. Bottle decoration is on the polyester surface. Initially, the bottle cans had capacities of 350, 450 and 500 mL, but recently 100- and 120-mL mini versions have been introduced. Originally 28 mm, the diameter of the opening has been increased to increase the rate of flow of the contents.

Applications, Benefits, and Economics
Using the aluminum bottle, packagers of fruit and energy beverages have been able to distinguish their products on the shelf and simultaneously achieve enhanced quality retention, i.e., longer shelf life, because air does not permeate the package. The main users in the U.S. have been Coca-Cola’s 12-fl-oz energy drinks and Kraft’s 16.5-fl-oz Capri Sun drinks (in Daiwa’s can) to complement its classical standup flexible pouch. One brewer, Iron City in Pittsburgh, Pa., has introduced one of its products in aluminum bottles.

In Japan, aluminum bottles of beer, tea, energy drinks, etc., have been marketed with good success. One report from Packaging Strategies suggests that as many as three billion aluminum bottles have been marketed worldwide since 2000, only a small fraction in the U.S. More information on aluminum-bottle market activities is available from Bill LeMaire of PakIntell ([email protected]).

Consumer benefits might center about a reclosable “can”; this has not yet been achievable economically with conventional aluminum or steel cans—although in the 1930s an extra top was seamed on a few beer cans in the center of which was an opening onto which a glass-bottle-type crown closure was attached; these were perhaps the first metal “bottles.” Metal cans with screw-cap closures seamed into the tops were not unusual, and are found today for non-food product packaging. And aluminum bottles are more easily recycled than the equivalent polyester bottles.

As might be expected, the economics of the aluminum bottle do not match those of the conventional aluminum can, being probably about 100% higher; this is perhaps one reason that the aluminum bottle has not penetrated any U.S. food or beverage market to any major degree since its recent push about two years ago.

A New Era?
The aluminum bottle serves as an interesting derivative package, demonstrating the ability of food and beverage packaging technologists to generate concepts by piggybacking on conventional and innovative technologies. Is the aluminum bottle merely a narrower-neck variation of the two-piece-aluminum can, as some have declared, or a residual from impact-extrusion-formed toothpaste tubes?

The result of all this intense development has been fascinating to analyze as the concept struggles to find a mainstream home in North America: is it a “better” can, an environmental breakthrough that threatens the spectacular polyester bottle, a novelty, or a new concept destined to win the hearts and stomachs of American consumers? Add the application of thermoplastic-film can-wall liners largely developed in Japan and the question becomes: is the aluminum bottle just an offspring, or is it truly the innovative beginning of a new era in beverage packaging?