As everyone not living on another planet knows, we have landed robotic exploration “rovers” on Mars and announced that we plan to send humans there during the next decade or so. 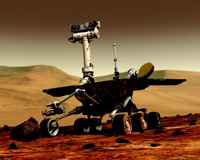 Teams of scientists and engineers have been pondering this journey for several years, just as dreamers have envisioned it since our ancestors first raised their eyes beyond the horizon millions of years ago. Deemed feasible when the first astronauts lifted off atop those powerhouse rocket engines nearly a half century ago, the trip appeared to be possible when Apollo alighted on the moon’s surface in 1969. Just enhance the engineering and we are off—until issues such as budget, power, distance, and nourishing the flyers are quantified.

Providing Enough Food
The official calculation is that no known or projected mission vehicle had enough capacity to carry sufficient food required to feed a crew for the expected three-year adventure. An outbound trip of 180 days and the same for the return plus a prolonged stay on Mars sums to about 900 days. Enough food for five persons for 3+ years totals about several tens of thousands of pounds plus packaging.

One intuitive reaction to this obvious weight challenge is to offer concentrated nutrient pills. Or why not carry frozen food, utilizing the low temperature of space? Another notion is to grow the food aboard the interplanetary voyager. Scientists and academicians leaped to address the problem by developing lettuce, wheat, potato, and soybean varieties capable of growth under the unusual environmental conditions aboard the vessel and certainly on the Martian surface. Scrutiny of these proposals, discussed below in reverse order, reveals further challenges:

• Growing Crops. The array of potential fresh foods may be consumed directly, i.e., with little processing. But few calories are generated from lettuce, spinach, onions, cabbage, etc., recognized on Earth to be dietary weight-loss foods, with relatively little nutritional benefit in the context of fueling humans. And growing wheat is but the first phase of reaping, threshing, grinding, mixing with other ingredients, and baking to the ultimate bread or cookies. Other crops envisioned, such as soybeans, peanuts, rice, etc., also require further processing to be converted into food. And what do you do with the waste? Astronauts must learn to be farmers in addition to their core responsibilities. Although agriculture might well become an element of future space exploration and colonization, the pioneering ventures might be better packaged with more basic objectives of survival and information expansion.

• Using Frozen Foods. The notion of a U-Haul trailer containing several tons of frozen food might be reminiscent of nuclear submarine dining, but engineers are less than enthusiastic over the prospects of retrieving such stuff “three times daily” from the vacuum of space.

• Taking Pills. This leads to the age-old idea of concentrated nutrients, which would provide the essentials, perhaps precisely when needed. Nutritionists could almost assuredly formulate such materials to be supplemented by recycled water. The people aboard interplanetary vessels are often equated to the modern-day versions of Columbus’s sailors— courageous, intrepid, and reckless—with little need for trivial luxuries such as food. Didn’t Lewis, Clark, and the other 19 men and one woman live off the land?

There won’t be any roadside restaurants or pizza delivery on the three-plus-year space trip, so why, some ask, bother to provide for dining experiences? Indeed, why provide nuclear submariners on their six-month tours with elegant gourmet-style meals? Because, according to NASA psychologists and the astronauts themselves, real food is one of the very few real links to home and reality, and an absolute necessity for a one-, two-, or three-year away-from-home experience, and the dining experience provides a psychological advantage to socialization. Food quality, variety, and acceptability exert an important psychological role and encourage consumption of a balanced diet, leading to enhancement of the astronauts’ well-being.

Preferences
Ask any veteran astronaut about space eating, and he or she will describe what is essentially a good restaurant meal as the preferred repast: shrimp cocktail, chocolate candy, cheeseburger, French-fried potatoes, and all the fixin’s. Astronauts aboard the Mir orbiter stuffed themselves with typical eastern European fare: borscht, kasha, pirogies, and blinis—all with high fat content, expansive mouthfeel, and filling, an anethema to classical nutritionists. And visiting American astronauts enjoyed the hearty Russian fare—not, according to the official record, accompanied by vodka.

By the way, a review of the historical records of Magellan, Cook, and their contemporaries indicate that they did not live solely off the ocean: live animals were aboard ship for milking and eventually meat. Someone back then figured out that limes and salt beef complemented with an occasional jigger of rum were necessary for the tars’ emotional survival.

Eating is not just indispensable physiologically—it is of prime importance to the effectiveness of crew performance on long-duration trips.

If pills and fresh produce are not highly probable total means to feed the astronauts enroute and on Mars, what then? And why haven’t we probed this issue previously? To date, we have not had to feed people for extended periods. Moon and shuttle shots have been measured in days or weeks. Orbiters are supplied on periodic bases by delivery services from shuttles, although the food shelf life is claimed to be one year. Never before have we had to provide real food for people for years. The objective is to provide a variety of foods with shelf life of three years that are microbiologically safe, nutritionally sound, complete in concert with each other, low in mass, and high in quality, i.e., acceptable to the consumers.

One might suppose that shelf life is a readily measurable unit, but it consists of three distinguishable components: one microbiological (safety) and two biochemical (nutritional value and acceptability). Microbiological shelf life is axiomatic—if not present, the food is automatically rejected in the beginning. Nutritional quality is obviously critical on long-duration trips but can be compensated by variety over short periods. Sensory quality is the key—some mediocre quality can be consumed, but for long durations, good quality must be present and visible.

It is interesting that the immediate answer offered to long shelf life is canned foods, including their direct descendants, retort-pouched foods. This constitutes an amazing response, since canned foods are products whose attributes are changed by processing and during prolonged distribution. They deteriorate over time as a result of both oxidative and non-oxidative reactions. Without any judgmental evaluation, consumer reaction to the concept of retort-pouched foods such as the military Meals, Ready to Eat (MRE) is generally quite negative, regardless of reality. Repeated tests among military personnel demonstrate a marginalization of the word acceptablity. Edibility and acceptability are not synonymous, even though some of the foods are “not bad.” Post-fill and hot-fill thermally processed foods are described as ambient-temperature shelf stable, whereas the expression should be microbiologically shelf stable. Despite their obvious merits, thermally processed foods in hermetically sealed packaging do not represent a biochemically and hence nutritionally “stable” food group which generates high acceptability among the young and the vigorous segment who are astronauts.

Food for Long Voyages
To date, NASA and its associated agencies have offered the following array of “technologies” for food to be complemented by the freshly harvested crops suggested above: dry rehydratable foods, retorted pouches, and retorted cans. For the dry foods, the removal of oxygen from “space foods” to date is so critical that the process is repeated three times during packaging, drawing vacuum, and inert gas flushing.

• Dehydrated Foods. Regardless of the quality levels that advocates might assign to dehydrated foods, the foods have been markedly altered from their original form and continue to lose quality during ambient-temperature distribution. The rehydrated product, even rehydrated freeze-dried product, often does not resemble that which is served from fresh ingredients.

• Irradiated Foods. The flavor and mouthfeel of irradiated foods have been the object of research and ridicule almost since their inception more than 50 years ago. Our ability to irradiate foods for ambient-temperature microbiological shelf stability has not been enhanced during that period. And low-dose irradiation, which receives so much media attention for its ability to reduce pathogens and visible mold, is not a sterilizing process. Hence the need for chilling, a distribution technology that evidently is not acceptable aboard space vehicles.

• Retort Pouches. An enumeration of the multiplicity of food and food packaging technologies that have been proposed to achieve ambient-temperature shelf stability, at least from a microbiological perspective, suggests a return to the retort pouch—but in an enhanced form.

Within the increasingly active confines of NASA, Michele Perchonok and her colleagues strive to achieve the as-yet elusive goal of integrating grown crops, in-flight processing, and prepackaged foods. Among these professionals are Beverly Swango, one of the pioneers in retort pouch technologies. These two, in concert with a number of industry and university professionals, have been attempting to conceptualize principles and technologies that might deliver the requisite foods for space travel.

Retort-pouch thermal processing protocols can be reduced to offer even higher quality than the best of commercial products and the many MRE products now in the system for both military and space feeding. Minimization of the time–temperature integral to achieve microbiological and enzymatic stability can provide products that initially can be more than acceptable—perhaps even rated “like very much” on the classical 9-point hedonic scale. The pouch itself can be minimized in mass while retaining its essential barrier properties.

But the key is virtually total removal of oxygen from the product and the package interior—not an easy task. Although some persons, citing a paucity of peer review literature, have asserted that the presence of oxygen is not a major influencing variable. The reality from industry, supported by university research evidence, is that most thermostablized food products are indeed altered by time. Further data and information clearly demonstrate that food processors and packagers tuned to consumer quality issues are more carefully controlling oxygen within products and packages. One might cite the exponential increases in the application of high-oxygen-barrier package structures and oxygen scavengers, both as independent sachets and incorporated into or onto the package structure.

Among the commercial food and beverage products whose quality is demonstrably better retained under near-zero oxygen conditions are orange juice, apple sauce, soft bakery goods, processed meats, and beer. Early data on both conventionally and aseptically canned foods, both high- and low-acid, showed the quality benefits of reduced-oxygen headspaces. Extrapolation of these documented findings strongly indicates that prepared foods contained in retort pouches could retain initial quality for several years at ambient temperature. The objective of delivering easy-to-access, high-sensory-quality meal solutions for astronauts could be achieved.

Would removal of oxygen from both product and package be easy? Hardly, since both dissolved and entrained oxygen are present throughout heterogeneous foods such as spaghetti and meat sauce. Concepts such as use of raw ingredients with little prior preparation, processing under inert atmosphere, and transit under reduced oxygen to the packaging area would be required. But if near-sterile, i.e., ultra-clean, environments can be developed and maintained for processing and transfer, achieving near-zero oxygen for both processing and packaging is within our engineering capacity. Control of the environment for processing and packaging has been achieved regularly on a commercial scale for pharmaceuticals and can be translated to food situations. And as a corollary result, controlled environment suggests that reduced microbiological load that can also offer the opportunity for reduced thermal input—another major contributor to initial quality.

A Vision of the Future
So, during the next decade, as our surrogates begin their journey to our planetary neighbor to explore, learn, and transmit information to us and our descendants, to hint at our origins and our future, they can be confident that we, the food and food packaging scientists and technologists, have provided them with not only the communications and engineering tools but also the basics that nourish and emotionally fulfill them.