By making it possible to investigate more alternatives in less time and at lower cost, flow modeling can help bring better products to market while lowering development costs. Flow modeling software (also known as Computational Fluid Dynamics or CFD) can be used to create a virtual prototype of the product or process that simulates real-world conditions.

Computed results include detailed predictions of flow velocity, temperature, and species concentrations for almost any piece of process equipment. Once created and validated, these virtual prototypes are used to investigate multiple design configurations, optimize manufacturing process parameters, and conduct safety studies. Being able to troubleshoot the manufacturing process, correct defects, and improve product quality in software rather than on the plant floor can reduce product development cycles while making it possible to improve manufacturing processes in the food industry.

State-of-the-art flow modeling programs can now analyze complex flow and heat transfer problems, such as those involving viscoelastic materials, multiple phases, complex chemical reactions, microbial kinetics, mixing-related phenomena, and intricate equipment geometries. The widespread availability of powerful computers at low cost and advances in software engineering for computer modeling applications have resulted in commercial software that is reliable, cost-effective, and easy to use, as well as being customizable for particular applications.

The advances in flow modeling have been driven by the tremendous need for analysis, design, and optimization of complex equipment in processing industries, such as petrochemicals, semiconductors, plastics, and pharmaceuticals. Today, flow modeling is a key component in the design and scale-up of unit processes in these industries, bringing about large improvements in process efficiency and product quality. These improvements can also benefit the food industry.

For example, flow modeling can predict the performance of alterations made to an extrusion die design, eliminating the need for expensive die modifications and long trials on production equipment. CFD can also be used to optimize nearly any type of mixer, including static mixers, vibromixers, and rotating mixers. Finally, flow modeling can be used to design processes that will meet Hazard Analysis and Critical Control Point (HACCP) guidelines in food safety studies.

The basics of CFD are described in Patankar (1980) and Versteeg and Malalasekera (1995). This article describes examples in which flow modeling was used to overcome challenging design problems in extrusion, mixing, and food safety analysis.

Extrusion and Die Design
Die design is a common problem faced by food engineers working with extrusion processes. In new product development, especially where profile sections of varying thickness are involved, balancing the flow distribution in the die is critical to stable production. Dies are typically balanced by opening and closing the die land and adding internal obstructions to accelerate or slow down the flow of material where needed. Balancing the die with CFD rather than physical experiments eliminates the need to build and test multiple dies and saves time and material on the extrusion line.

Fig. 1 shows a die balancing problem that is common in food extrusion. The velocity distribution across the outlet of the die land in the original design is very non-uniform, as shown in the lower portion of Fig. 1a. The fluid flow path through the converging region of the die and the die land therefore needs to be adjusted to improve the velocity uniformity. In the region where the exit velocity is low, the backface section of the converging region was opened to allow greater material flow. Where the material moves too fast, the cross-sectional area of the converging region is reduced. By using the flow model to evaluate the effectiveness of these changes, the die was redesigned to produce much more uniform flow before the first prototype was built.

Fig. 2 shows a dough extruder head assembly, which was redesigned from a round shape to an eight-point-star configuration. The velocity contours at the exit of the die, as calculated by the flow model, indicated a maldistribution problem. The CFD model was used to determine the internal baffle configuration required to provide the proper flow resistance and distribute the dough evenly across the head.

In twin-screw extrusion of foods such as snacks, puffed foods, and cereals, the screw profile consists of kneading blocks, forward-pumping elements, and reverse-pumping elements in a particular sequence. Designing a screw profile for a new product can be a daunting task. Modeling can determine the design that produces the desired level of mixing, pressure rise/drop, and residence time. Fig. 3 shows a comparison between neutral, forward, and reverse elements in a kneading block section and their effects on pressure and velocity fields. For the reverse element, the high pressure in the inlet section forces the fluid to cross the mixing section. A pressure drop is observed for this element and the neutral element, while the pressure increases from the inlet to the outlet with the forward element. These flow details determine the mixing effectiveness of the kneading block configuration. Similarly, flow modeling can be used to map the performance of each screw section, and thus aid in the development of new screw profiles. 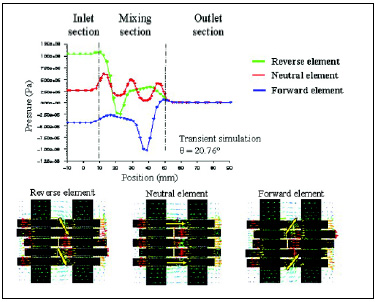 Mixing Applications
Mixing is one of the oldest operations, and continues to be a challenge in many industries today. It is an integral part of food manufacturing, and can be accomplished through the use of many types of mixing equipment. For all types of mixers, however, one of the most difficult tasks for engineers is to make sure that mixture homogeneity is preserved.

Static mixers consist of stationary mixing elements arrayed along a pipe or a channel. Static mixers are used in the food industry when gentle treatment at low shear is required. Examples include dilution of syrups and juices, and the blending of tomato puree, salad dressings, etc. The mixing quality increases with the number of elements, but so does the power required to pump the fluids through the channel. Modeling can be used to determine the minimum number of elements needed to achieve the desired product homogeneity. In Fig. 4, contours of concentration are shown for two materials undergoing mixing. Using simulations such as this, the pressure drop and power requirements can be computed for a range of mixer designs, and these results can be weighed against the product uniformity at the mixer exit. 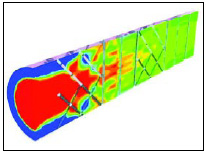 The planetary mixer shown in Fig. 5, which consists of a 250-mm-diameter tank and two counter-rotating blades (265 mm high by 135 mm wide), is used to mix dough. The predictive capabilities of numerical simulation were demonstrated by making a comparison between the mixing efficiency of straight blades (left) and twisted blades (right). The distributive index measures the difference between the volume-averaged actual distribution and a perfect distribution as the mixing process proceeds. The results in Fig. 6 show that the distributive index decreases quickly during the first few rotations and then levels off. Straight blades provide superior mixing performance initially, but twisted blades match their performance at about the fifth revolution and provide a better distribution from that point on, as indicated by a lower value of the distributive index. 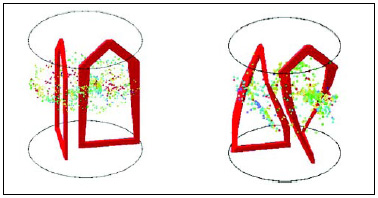 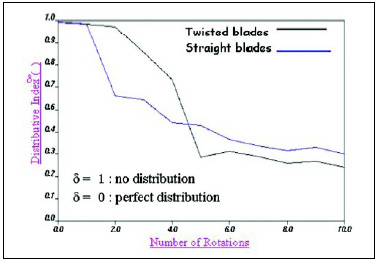 Disk impellers that agitate a liquid by moving up and down are called vibromixers. They are commonly used in hermetically sealed vessels where it is impractical to use rotating seals (which are required for rotating mixers). Common uses include bioprocessing applications such as fermentation. For the vibromixer shown in Fig. 7, the tapered ends of the perforations are oriented upward, so fluid jets are emitted from the tops of the holes during the downward stroke of the impeller (Fig. 8). During the upward stroke, fluid flows in the reverse direction into diverging conical volumes. The upward-directed jets are stronger, and give rise to circulation patterns in the bulk fluid. The downward-directed jets are weak by comparison and quickly dissipate. 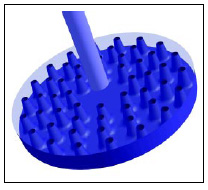 CFD can be used to help understand the flow patterns and circulation time characteristics of a particular mixer design and liquid material. If there are solids in the system, the simulation can help to determine the processing window of vibration frequency and amplitude to keep the solids in suspension. 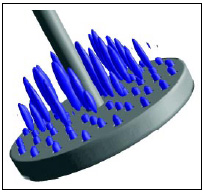 Stainless-steel mixing tanks outfitted with multiple agitators are used in several applications when mixing two or more high-viscosity fluids, mixing solids into liquids, and bioprocessing. A food engineer is often faced with the task of optimizing the locations, diameters, rotational speeds, and other geometric variables of these components to obtain good control of the process and maintain consistent product quality.

Fig. 9 shows an example of a mixing tank for bioprocessing with a ring sparger, where air is introduced into the system. Oxygen transfer from the air to the medium is crucial to the success of a bioreactor design. Gas-holdup studies that predict the amount of gas in the gas–liquid system are good indicators for oxygen transfer. Fig. 9 shows that the gas holdup is not uniform throughout this reactor. The results of such flow modeling studies can guide the design of the bioreactor to improve oxygen transfer, particularly during scale-up. 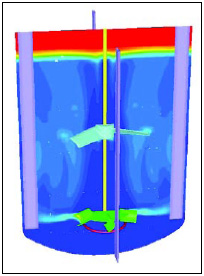 Food Safety
Food safety is always a concern for a food manufacturer. Modeling studies provide an additional tool to ensure that the food product meets the safety requirements of Food and Drug Administration regulations or HACCP guidelines. For example, modeling can be used to optimize the lengths of heating, holding, and cooling sections in aseptic processing. Fig. 10 shows an example of a heating chart developed by modeling the sterilization of ground beef in a still-cook retort. The product was placed in an 0.85% carboxymethylcellulose suspension in water at an initial temperature of 313oK and a wall temperature of 394oK. The simulation was used to predict the temperature and microbial kill rates at various times in the heating process, based on natural convection and pure conduction heating. The results show that a simplified analysis (pure conduction) of this process that neglects convection heating is inaccurate and will greatly underpredict the product temperature, a result that could lead to overcooking. 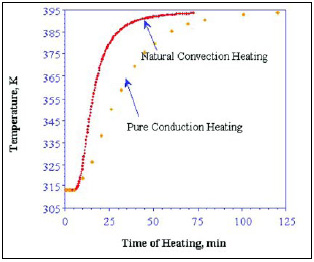 Sources
There are many ways that flow modeling can help increase the understanding of food and beverage products and processes, optimize designs, and shorten time to market. Flow simulations allow engineers and food scientists to move beyond simple rules-of-thumb and empirical correlations. They provide detailed predictions of fluid velocity, pressure, temperature, and related quantities. In addition to aiding the development of new products and processes, these results can also help guide and focus experimental work and pilot-plant trials.