Off-flavors in foods can arise from environmental sources such as air, water, and packaging materials, from chemical and biochemical reactions occurring within the food itself, and from flavor–matrix interactions, all of which can imbalance the intrinsic flavor profile. The interactions of flavor chemicals with food matrices and food macromolecules—proteins, lipids, and carbohydrates—can result in physical entrapment via formation of covalent, hydrogen, electrostatic, and hydrophobic bonds, which ultimately alters the proportion of flavor chemicals.

Waterborne off-flavors arise from reconstitution of foods with water prior to processing and from direct steam injection during processing. Off-flavor formation in water is commonly due to microbial growth, which results in the formation of methyl, isobutyl, and n-butyl mercaptans and dimethyl sulfide. Certain microorganisms may produce 2-methylisoborneol, geosmin, or 2-methoxy-3-isopropyl pyrazine with exceptionally low thresholds, all of which have very characteristic earthy, moldy, and musty notes (Reineccius, 1991).

Since excellent review articles and book chapters (Reineccius, 1991, 1994; Marsili, 1997) have been devoted to environmental source–related off-flavors, the remainder of this article will focus on off-flavors from biochemical and chemical origins. 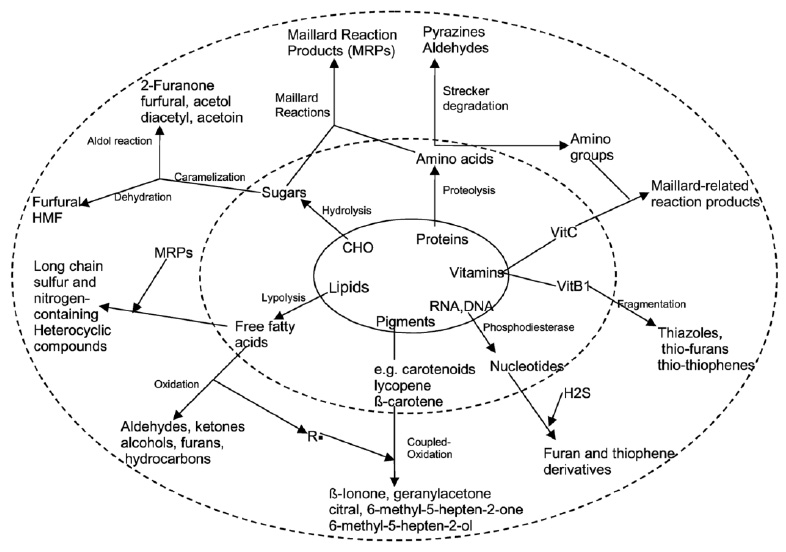 • Lipid Hydrolysis. Lipid hydrolysis releases fatty acids. The free fatty acids from most foods are mid- to long-chain fatty acids (>12 carbons) and are often too large to make a significant contribution to aroma. Hence, the only foods where lipolysis produces significant off-flavor are those that contain short-chain fatty acids, such as dairy foods and coconut. In this case, the off-flavor has been characterized as butyric, goaty, and bitter in nature.

• Bacterial Enzymatic Changes. Enzymatic flavor changes are primarily due to lipases, lipoxygenases, and various proteases. Hydrolases from psychrotrophic bacteria (proteinases) and the naturally occurring milk proteinase (plasmin) produce varying astringencies (Harwalkar et al., 1993). The development of astringency in raw milk during storage has also been linked to production of polypeptides resulting from the action of plasmin and other proteases. Proteolysis results in short-chain peptides with bitter taste characteristics. Bitter peptides have leucine at their C-terminal end. In green coffee, off-flavors often described as medicinal, musty, cellar-like, phenolic, or iodine-like have been attributed to fungal (aspergilli, fusaria, penicillia, Rhizopus, etc.) and bacterial (lactobacilli, streptococci) enzymes that formed 2,4,6-trichloroanisole (Spadone et al., 1990). This compound was found in concentrations of 1–100 ppb in all samples, while the gustatory and olfactory perception thresholds were 1–2 ppt and 8 ppt, respectively. 2,4,6-Trichloroanisole probably derives from the degradation of chlorinated pesticides and fungicides.

• Lipid Oxidation. Lipid oxidation results in the formation of aldehydes, ketones, alcohols, acids, lactones, esters, and hydrocarbons. Unsaturated aldehydes and ketones are most responsible for off-flavors because of their low threshold. For example, the metallic taint in oxidized butter has been attributed to 1-octen-3-one (Stark and Forst, 1962). Trace metals (copper, iron, cobalt) and high temperature hasten lipid oxidation. Warmed-over-flavor (WOF) is an off-flavor associated with precooked meats (Tims and Watts, 1958). In a study on “changes in the odorants of boiled salmon and cod as affected by the storage of the raw material,” Milo and Grosch (1996) reported that Z-1,5-octadien-3-one, E,Z-2,6-nonadienal, acetaldehyde, and methional contribute to the character-impact odorants of both salmon and cod, propionaldehyde to that of salmon only, and E,E-2,4-decadienal to that of cod only, all stored at –60°C. The off-flavors were found in samples stored at higher temperature, and were mainly caused by an increase in E,Z-2,6-nonadienal (from 9.7 to 26 ppb), Z-3-hexenal (from 3.9 to 50 ppb), and Z,Z-3,6-nonadienal (from 5.7 to 46 ppb) in salmon, and an increase in 3-methylbutanal (from 51 to 620 ppb) in cod (Fig. 2). Lai et al. (1995) assessed off-flavor development in restructured chicken nuggets and found that a 18.5-ppm level of hexanal (from the oxidation of linolenic acid) was responsible for warmed-over-flavor notes in samples stored at –60°C for six months. Lower levels of hexanal (<1 ppm) produced acceptable flavors. 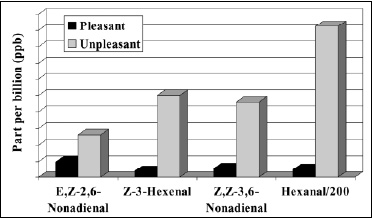 • Nonenzymatic Browning. Nonenzymatic browning reactions (i.e., Maillard reactions and polymerization) that occur during storage are undesirable, while those that occur during heating are desirable. At storage temperature, the reaction leading to toasted/roasted, nutty, and meaty flavor compounds are not favored, and these notes therefore disappear from the product during storage.

Unfortunately, the nonenzymatic browning pathway leading to stale, sour-green sulfury notes can and do progress at typical storage temperatures to generate compounds such as benzothiazole and o-aminoacetophenone. N-Methyl pyrrole is an off-flavor from nonenzymatic browning in roasted peanuts and has been characterized as musty (Basha et al., 1996).

Under storage at 6°C, odor-active thiols 2-methyl-3-furanthiol, 2-furfurylthiol, mercaptoacetone, 2-mercapto-3-butanone, and 3-mercapto-2-pentanone oxidize to disulfide, with 2-furfurylthiol showing the highest oxidation rate and decreasing by 50% over 10 days (Hofmann et al., 1996). These changes lead to flavor imbalance and deterioration.

• Photoxidation. Photo-induced (light-induced) off-flavors also result from lipid oxidation and protein degradation. Linoleic acid is highly susceptible to photoxidation, and can lead to the formation of high levels of hexanal. Cabbagy, burnt-protein, and burnt-feather notes are associated with protein degradation. Amino acid degradation is catalyzed by riboflavin photoxidation and results in thiols, sulfides, disulfides, and 3-methylthiopropanal. Ultraviolet radiation exposure of methionine in the presence of riboflavin and oxygen generates methional, which further degrades to methanethiol, dimethyl sulfide, and dimethyl disulfide, all of which contribute to a cabbage or burnt-feather-type aroma. Maillard reaction heterocyclic intermediates 2-ethylpyrrole, 2-ethylfuran, and 2,4,5-trimethyloxazole decrease in concentration as a result of photoxidation in the presence of chlorophyll (Ho, 1997).

The information above indicates that most chemical processes involved in the formation of off-flavors in foods are essentially the same as those responsible for the generation of desirable flavor, and include lipid hydrolysis and oxidation, photoxidation, proteolysis, and nonenzymatic browning reactions.

It also appears that the concentration of a given compound has an impact on the sensory attribute of that compound. For instance, less than 1 ppm of hexanal produces acceptable flavor in restructured chicken nuggets, while18.5 ppm gives off-flavor. Widder et al. (2000) reported that the flavor quality of their newly patented 3-mercapto-2-methyl-pentanol strongly depends on concentration. A high concentration (1 ppm in water) produced an unpleasant, sulfuric, burnt, gum-like, sweaty and onion-like odor. A lower concentration, however, gave a pleasant, broth-like, slightly sweaty, onion- and leek-like flavor.

The sensory attributes of flavors are concentration-dependent, and any assumption of linearity in acceptability response over wide concentration ranges may not be accurate.

Troubleshooting Off-flavor Issues
Given the complex origins of flavor chemicals, finding solutions for off-flavor issues can be a challenging undertaking. Nonetheless, filtering water before use in food reconstitution or processing can reduce contamination from waterborne off-flavors. Since most industrially produced foods need shipping and storage, adequate packaging that minimizes oxygen, water, and flavor-chemical transmission rates can reduce oxidative processes and airborne off-odor contamination.

Because raw material sources, processing, and storage conditions affect flavor chemicals, both qualitatively and quantitatively, an educated selection of raw materials and processing parameters may help resolve issues related to off-flavors. For instance, if hexanal, pentanal, or 2,6-nonadienal are chemically and organoleptically implicated in the development of rancid off-odors, then ingredients and processing conditions need to be modified to minimize lipid oxidation. This is easier said than done. In actual food systems, one flavor chemical species can be formed from different ingredients and chemical processes. This is where knowledge of reaction flavor chemistry is needed to identify the possible chemical pathways for given flavor compounds. In situations where changes to ingredients and processing conditions are not practical, flavor houses can help mask off-flavors with other suitable flavors, or rebalance the flavor profile of the finished food product to minimize or eliminate off-flavors in a given food product.