As a food scientist in the product development department, I was probably the best rheologist on the staff because I personally tested everything and anything we tried to formulate. Half of my evaluation was based on flavor acceptance and half on texture acceptance. I was doing my own testing with taste buds and teeth for many years before the research center realized the importance and economics of hiring a trained rheologist for texture measurement studies, along with sensory evaluation experts for the flavor and texture evaluation. 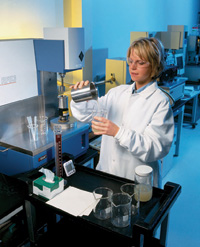 When I told this to a rheologist friend, he quickly advised me that texture measurement can be very complex when applied to foods. So I contacted several experts in the field to find out more about rheology and texture.

Rheology Important in Texture
Malcolm Bourne ([email protected]), Emeritus Professor of Food Science at Cornell University, Geneva, N.Y., explained that “rheology” is the study of the flow and deformation of matter and the term is derived from the Greek word rheo, meaning flow. This definition was created in 1929, when the Society of Rheology was founded in Washington, D.C. by a group of scientists who were grappling with understanding the flow properties of complex fluids such as blood, printing inks, and plastics.

“Since many foods have complex flow properties,” he said, “food rheology has become a significant module in the field of rheology.” He explained that a number of food processing operations depend heavily on the rheological properties of the food at intermediate stages of manufacture because this has a profound effect on the quality of the finished product. For example, the rheology of wheat dough, milk curd, and meat emulsions is a major determinant of the textural quality of finished bread, cheese, and sausage products.

“Rheology,” he continued, “is also a significant module in the texture of food.” Textural properties that fall within the rheology domain include the perception of thickness of fluid foods; how readily items such as butter, mayonnaise, and cheese dips spread over bread, crackers, or chips; and how readily foods such as cake, peaches, and tomatoes deform when gently squeezed in the hand.

“Texture,” Bourne added, “is a sensory property that is perceived primarily by the tactile sense (touch), but in some cases is perceived by sound, sight, and kinesthetics (sense of movement and position).” Many texture notes are perceived during mastication, and most of them are not rheological properties. For example, the fracturing that occurs during crushing and grinding between the teeth; the sensations of particle size, shape, and roughness; and the feeling of release of moisture or fat are major texture notes that have no relation to rheology. “There is a lot of rheology in texture,” he said, “but texture has a much wider compass than rheology. Also, it is likely that some rheological properties that are important in non-food items such as plastics have little relevance to foods.”

Because different foods are handled in different ways by the body, a wide variety of objective tests have been used to measure texture. “Only people can measure texture,” Bourne said, “but if an instrument reading gives a high correlation with sensory assessment of textural quality it is considered to be a texture measurement.”

Enormous improvements have been made in the instrumentation for measuring texture over the past 30 years, Bourne continued. These fall into two broad classes. Instruments that use a rectilinear motion are generally used for solid foods and are commonly called Universal Testing Machines (UTMs) because they can be configured with many different attachments that enable a wide range of test principles to be performed in a single machine. The UTMs most widely used by the food industry are Texture Technologies’ TA.XT2 Texture Analyzer, Instron, Food Technology Texture Test System, LFRA Texture Analyzer, and Tex Vol. Instruments that use a rotary motion are generally used for liquids and semi-liquids and are called rheometers. The rheometers most widely used by the food industry are the Brookfield, Haake, Rheometrics, and TA Instruments.

Bourne is the author of Food Texture and Viscosity: Concept and Measurement, the second edition of which was published by Academic Press in 2002. Since 1980, he has been Editor-in-Chief of the Journal of Texture Studies (www.blackwellpublishing.com), which has been reporting advances in food rheology, psychorheology, and physical and sensory testing of foods for 36 years.

Variety of Instruments Used
I also asked another expert to summarize, from a production viewpoint, why and how texture affects food attributes. Frank Huang, formerly a food rheologist at Swift R&D Center, Oakbrook, Ill., and Technology Development Manager at Kal Kan Foods, Vernon, Calif., is currently Professor of Food Science at Fujian Agriculture and Forestry University in China, where he teaches Physical Properties of Food Materials, a graduate course that includes food rheology.

Huang said that his experience in food R&D, production, and consumer testing led him to believe that texture studies are indispensable for food researchers and the industry. “Food color and appearance are clearly influenced by material textural attributes,” he said. “Even flavor and taste can be significantly affected by the physical structure of a food material. Baked and emulsified food products are some good examples where rheology and texture play an important role in flavor release, taste and overall consumer acceptance of the finished products.”

He has used a variety of rheology and food texture testing instruments, including the Cannon-Fenske Viscometer for kinematic viscosity determination, Brookfield Viscometer for the viscosity of fluids, Brabender Farinograph for gluten rheology, Bostwick Consistometer for quality monitoring of batter-like mixes, Zwick and Instron UTMs for soy-protein spun fibers and meat texture determination, Boucher Tester for gels and gelation studies, and Haake and Rheometric rheology instruments for the selection of thickening agents and the design of ultra-high-temperature pasteurization processes.

Huang said that there are several commercially available instruments, based on the principle of the universal testing machine, geared for food applications. They include Farnell, Food Technology Corp., and Shimadzu texture analyzers. Dynamic rheological measuring devices, such as the Tinius Olsen Rheometer, Weitzy Dynamic Rheometer, and Paar-Physica Rheometer, can be applied to measure the viscoelastic properties of a food material. Recently, the Micro-Fourier Rheometer, supplied by GBC Scientific Equipment, is applicable for online monitoring with its rapid non-Newtonian measurements. Brookfield Laboratories has also announced a high-resolution ultrasonic spectroscope to perform high-frequency rheological characterization of emulsions, suspensions, and solutions of polymers.

Texture Affects Total Sensory Experience
Texture is a food attribute, like flavor and appearance, which affects the total sensory experience enjoyed by the consumer. As sophistication in the consumer palate rises and as the demands on foods—such as zero trans fat, low carbohydrate, increased shelf stability, etc.—that affect texture become more complex, food texturization is likely to be an area of opportunity and challenge for the food industry. Indeed, Information Resources, Inc. identified a different texture as one of the top 15 benefits associated with the products making their latest New Product Pacesetters list of products generating more than $7.5 million in sales during their first year in food, drug, and mass outlets (excluding Wal-Mart).

“Texture is what makes a mousse light and airy and a cookie crisp and chewy,” Fong said. “With that said, texture is difficult to precisely define. Consumers probably don’t think about texture consciously, and are more likely to be able to talk about textures they don’t find appealing (e.g., slimy lettuce) than those that motivate their purchasing behavior.

“We employ consumer research techniques to dig deeply into the emotional drivers and barriers of category usage relating specifically to texture,” he continued, “using lengthy consumer interviews and imagery rather than traditional focus groups. As a result, we have been able to build a sophisticated database of connections between product texture attributes, sensory descriptors, and emotional product benefits.”

To speed formulation and prototyping, he said, the company has built a comprehensive database that supports texture maps based on sensory and technical measurements. The database is populated with real application data gained from decades of food formulation across food applications, along with data from rapid experimentation with ingredients and ingredient systems in various applications. “These texture maps,” he added, “allow clients to understand the textural space occupied by commercial products and white spaces representing new opportunities. Each location on the map corresponds to sets of ingredients capable of delivering that texture. Clients can use these maps to predict textures and required ingredients without having to conduct significant experimentation.”