Marine-based nutraceuticals are growing in consumer awareness because of their reported range of benefits, from antioxidant effects to immunity enhancement. 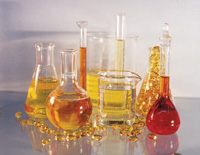 A more recent animal study suggested that people who eat significant amounts of DHA may be less likely to get Alzheimer’s disease (Lim et al., 2005).

• Oils. Several marine-based oils are available for dietary supplement and functional food manufacturers, providing sources of eicosapentaenoic acid (EPA) and DHA, and in some cases, vitamins A and D. Oils ranging from cod liver to sardine are offered by Jedwards International Inc., Quincy, Mass. Cod liver oil is a good source of vitamins A and D and contains approximately 10% EPA and 10% DHA. Salmon oil is an excellent source of EPA and DHA (18% EPA, 12% DHA) and is self-affirmed as GRAS by Jedwards. Tuna oil boasts a 25% DHA, 5% EPA content. Sardine oil is used in dietary supplements as a source of EPA and DHA. It is also self-affirmed as GRAS.

Concentration technologies, including molecular distillation, have also recently become available. They not only remove any environmental contaminants that might be in the oil, but also concentrate the omega-3 content up to 80%, explains Edward Iorio, Special Projects Director at Jedwards. “Other methods are being explored to reach even higher levels of purity.

The omega-3 health claims allowed by the Food and Drug Administration are only allowed for omega-3 from marine sources, notes Iorio. “It is a very common misconception that a crop source for EPA and DHA exists. The only plant source available for EPA and DHA is algae oil.”

• Minerals. Calcium and other minerals and trace minerals can be harvested from the sea as well. A natural calcified mineral source is available for use in both functional foods and dietary supplements, providing bioactive calcium, magnesium, and trace minerals for bone health and overall wellness. “Aquamin™ is derived from Lithothamnion sp., a sea plant. The product is harvested from the portions of the sea plant that have naturally broken down and settled to the bottom of the sea,” says Juliana Zeiher, Food Applications Manager at GTC Nutrition, Golden, Colo.

The ingredient is available in three forms, providing opportunities for a wide variety of applications, from baked goods and beverages to confections and dietary supplements, says Zeiher.

• Astaxanthin. This carotenoid is microalgae-derived and sold as a dietary supplement. Guerin et al. (2003) discussed the antioxidant, UV-light protection, anti-inflammatory and other properties of astaxanthin and its possible role in human health problems. They concluded that the research reviewed supported the assumption that protecting body tissues from oxidative damage with daily ingestion of natural astaxanthin might be a practical and beneficial strategy in health management.

A commercial form of astaxanthin, Zanthin (Valensa International, Eustis, Fla.), was approved in June by FDA for use as a dietary supplement. The company holds the U.S. patent for use of the carotenoid antioxidant to slow the development and ameliorate the effects of eye and/or central nervous system diseases. Zanthin is a supercritical carbon dioxide extract of Haematococcus pluvialis microalgae.

A commercial form of spirulina was recently shown to have anti-allergy effects in allergic rhinitis patients (Mao et al., 2005). The clinical study demonstrated that ingesting only 2 g of spirulina/day provided a significant reduction in the level of interleuken-4 (IL-4) in the body. IL-4 is produced by certain immune cells and is responsible for the production of the antibody, immunoglobulin E (IgE), which mediates symptoms of allergic rhinitis.

In March, Earthrise Nutritionals LLC, Irvine, Calif., introduced Spirulina IL-4TM, a dietary supplement designed to enhance overall health and immunity by modulating the immune system and helping to reduce IL-4. The company also offers GRAS spirulina for use in foods and supplements.

According to Ocean Nutrition Canada, Respondin belongs to a category of natural ingredients called immune response modifiers (IRMs), which are characterized by their ability to support weak immune systems in times of immune stress. IRMs can also support overactive immune systems during conditions like allergy when the immune system is hyperactive.

• Chitosan. Because chitosan is believed to absorb and bind fat and inhibit LDL cholesterol while boosting HDL cholesterol, it is a popular dietary supplement for weight loss. It is derived from chitin, a natural polymer obtained from the shells of shellfish. When evaluated as a weight-loss supplement, however, results for chitosan’s effectiveness have not been consistent. Despite these reports, chitosan supplement manufacturers believe that chitosan may be more effective in promoting weight loss when used in conjunction with a reduced-calorie and reduced-fat diet.