Breakfast cereal is one of the many foods that are being fortified with iron. Researchers are studying various approaches to increase the bioavailability of this mineral in these foods. Photo by Scott Bauer, courtesy of USDA/ARS

According to the World Health Organization, iron deficiency is the most common nutritional disorder in the world, affecting as many as 2 billion people. About half of these individuals develop anemia, a serious condition which contributes to maternal deaths, increases infant mortality, retards physical and mental development, and impairs school performance. Weakness and loss of energy associated with iron deficiency impairs physical work capacity and causes reductions in the productivity levels of individuals and entire populations. Estimates for global losses reach nearly $9 billion annually and present serious economic consequences and obstacles to national development. 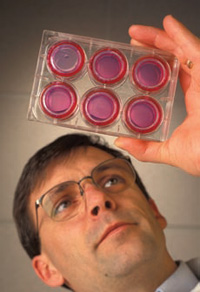 Reducing this monumental human and economic burden is feasible but complex. Strategies to reduce iron deficiency include dietary diversification, pharmaceutical supplementation, and food fortification. In parts of the world where rates of iron deficiency affect more than 50% of adult women and children, typical diets include mainly cereals and tubers, supplying little iron nutrition. Diversifying these diets to include more animal products and fruits that promote iron absorption because they are rich in ascorbic acid is difficult because of high cost and limited availability. In addition, iron supplementation can be problematic when considering logistic and cost issues, and compliance with a daily or weekly regimen is often low.

Fortifying or adding iron to mass-produced foods, such as wheat and maize flours, or commonly consumed condiments, such as salt, fish, or soy sauce, may be the most cost-effective approach to reaching large populations at risk of iron deficiency. Targeted markets, such as fortified infant formulas, complementary foods, or milk, offer an opportunity to reach young children who are most at risk.

Iron fortification has been practiced in the industrial world since the mid-20th century and has spread to developing countries across the globe, including South America, Asia, and Africa. However, while there is general consensus on the effectiveness of iron fortification in most foods, some doubt remains about the usefulness of the most widely consumed food fortification vehicles such as cereal flours.

SUSTAIN (Sharing Science & Technology to Aid in the Improvement of Nutrition)—a nonprofit organization that engages industry, the scientific research community, and government in collaborative efforts to enhance the nutritive quality of food staples and encourages technologic innovation—assembled a globally eminent group of food scientists, hematologists, nutritionists, regulatory experts, iron fortificant suppliers, and other industry representatives to summarize the key issues and evaluate technologies to improve the effectiveness of iron fortification.

After reviewing a number of iron fortification programs and studies from around the world, the task force concluded that iron fortification can be a useful strategy to combat iron deficiency. The task force’s findings (Hurrell et al., 2004; Moore et al., 2004) were reported in the June 2004 special issue of the International Journal for Vitamin and Nutrition Research titled “Innovative Ingredient Technologies to Enhance Iron Absorption.” This article is a summary of the task force’s findings.

The Fortification Challenge
There is more to iron fortification than just adding iron to food. Depending on the overall diet, 75–95% or more of the iron in the food we eat is not bioavailable—meaning it is not absorbed into the bloodstream and cannot be utilized by the body. In many developing countries, intake of dietary iron is quite high but iron deficiency remains widespread. This is because many components in the diet, particularly whole-grain wheat, maize, and other plant-based diets common in the developing world, contain high levels of compounds such as phytates and phenols, which bind iron to prevent iron absorption.

The challenge facing food technologists is to identify an iron compound that is sufficiently absorbed but does not cause adverse sensory changes to the food vehicle. While the more-soluble iron compounds are more bioavailable, they are also more reactive and combine with other components in food to potentially affect the taste, color, and storage of the food. The more bioavailable the compound, the more likely it is that changes in the organoleptic qualities of the food will occur. 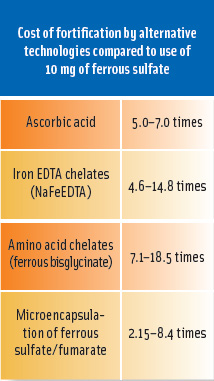 In practice, highly soluble compounds of iron like ferrous sulfate are desirable food fortificants but are not used in many food vehicles because of sensory issues. Consequently, use of less well-absorbed forms of iron, such as elemental iron powders, is widespread. The task force reviewed the five most commonly used elemental iron powders and concluded that only one, electrolytic iron, has been demonstrated to be effective in actually improving iron status. However, because it is judged to be half as bioavailable as ferrous sulfate, the task force recommended that electrolytic iron should be added to foods at twice the level of ferrous sulfate. In highly inhibitory food matrixes such as whole-grain flours—consumed in much of the developing world where iron deficiency is a major public health problem—it is not possible to add sufficient levels of electrolytic iron to have significant impact on iron status.

Are Enhancement Technologies Effective?
The task force assessed different strategies for increasing the bioavailability of fortification iron from diets containing significant amounts of inhibitors of iron absorption, while at the same time not causing adverse sensory changes in the food vehicles. They reviewed data from around the world concluding that iron fortification of foods can be a useful strategy to combat iron deficiency. While the addition of an absorption enhancer or substance to protect the iron from reacting may not be necessary if the amount of added iron is sufficiently high, the evidence indicated that protecting the fortification iron from absorption inhibitors such as phytate is a useful way to ensure adequate iron absorption and improve iron status. The task force reviewed a number of technologies in detail and made the following recommendations:
• Ascorbic Acid. The reducing and chelating properties of ascorbic acid enhance the absorption of both intrinsic food iron as well as major iron fortificants by 2–3 times. The task force recommends the addition of ascorbic acid to improve iron absorption for iron-fortified dry food preparations, such as precooked cereal and legume-based infant foods, powdered milk, and other dry beverage products made for reconstitution. Since nearly all ascorbic acid is destroyed during prolonged cooking and high heat, ascorbic acid is not recommended for liquid foods, unless stability can be maximized by adequate packaging, or for breads, gruels, and other foods that require baking and prolonged cooking.

• Iron EDTA Chelates. Sodium iron ethylenediaminetetraacetic acid (NaFeEDTA) has a promoting effect on iron absorption from inhibitory meals—a number of studies have shown the iron to be absorbed 2–3 times greater than iron in ferrous sulfate. However, there is no advantage relative to ferrous sulfate in non-inhibitory low-phytate meals. The task force recommends NaFeEDTA for use in soy and fish sauces and potentially in other condiments. It is not recommended for infant formulas and complementary foods because the acceptable daily intake for EDTA may be exceeded if the quantity of NaFeEDTA is sufficient to meet the iron requirements of young children.

NaFeEDTA’s widespread introduction is currently hampered by its ambiguous regulatory status and the lack of published evidence on the stability and organoleptic effects of this product during processing, storage, and cooking.

• Amino Acid Chelates. While its bioavailability is not yet established in human trials, a number of studies have demonstrated that iron absorption from ferrous bisglycinate is 2–3 times higher than that from ferrous sulfate. The iron in ferrous bisglycinate, a patented product, appears to be well absorbed from milk, milk products, beverages, and high-phytate cereal products.

However, there is very little published evidence on stability and organoleptic effects of amino acid chelates during processing, storage, and cooking. Since there is potential for sensory changes in some food vehicles, including fat oxidation in cereals in the absence of an antioxidant, further research is needed for amino acid chelates in vehicles other than milk and beverage products.

• Phytate Degradation. Phytate is a potent inhibitor of absorption for native and fortified iron in cereals and legume-based foods. Complete dephytinization has reportedly increased iron absorption by 2–12 times. However, if dephytinization is not complete or not at least achieving a phytate-to-iron molar ratio of less than 1:1, then the increases in iron absorption are substantially lower or nonexistent.

Low-cost cereal and legume-based complementary foods reconstituted with potable water may be the most appropriate vehicles for dephytinization in the developing world. The task force concluded that a number of questions about technical feasibility and cost need to be resolved for food uses.

• Encapsulation. This technique may improve the shelf life of fortified products by preventing iron-mediated fat oxidation. Therefore, it may allow the addition of iron compounds with high relative bioavailability into foods where organoleptic changes would otherwise pose problems. Encapsulated iron compounds are suitable for most dry products, such as infant foods, dry beverage mixes, and other minimally processed foods. However, food preparation that involves heat may cause melting of the capsule and lead to undesirable organoleptic changes.

A Modest Investment
The use of these technologies to enhance iron bioavailability can increase the effectiveness of iron fortification but will add to the overall costs of fortification. It is important to note that, while increasing the cost, they may make it possible to achieve an equivalent biological impact with a lower level of iron, offsetting the cost increase to some extent.

The task force compared costs among various strategies that would be expected to have the same impact as iron absorbed from 10 mg of ferrous sulfate monohydrate. While it is currently not possible to confidently assess the costs of dephytinization, the added costs of the other strategies assessed by the task force ranged from 2.15 to 18.5 times the cost of ferrous sulfate (see table on p. 75). Given the already extremely low costs of iron fortification, this represents a modest investment in the improvement of product quality and the key to achieving dramatic results in lowering iron deficiency around the world.

Do Prebiotics Aid Iron Bioavailability?
Poor bioavailability of iron, especially from diets rich in cereals and legumes, is a major factor contributing to the high prevalence of iron deficiency in developing countries. Increasing the intake of dietary components that promote iron absorption from low-bioavailability meals is an effective strategy for combating nutritional iron deficiency.

In a paper in the June/July 2005 issue of Journal of Food Science, researchers from Cornell University and the U.S. Dept. of Agriculture’s Agricultural Research Service review the functional properties of prebiotics—nondigestible oligosaccharides that selectively stimulate the growth and activity of specific species of bacteria in the colon with benefits to human health—as a promising dietary factor that enhances iron absorption.

Common prebiotics such as inulin and fructooligosaccharides occur naturally in a wide variety of plant-based foods and have recently been suggested to enhance iron absorption. This hypothesis is biologically plausible, the authors say, because fermentation of prebiotics by natural microflora present in the colon may decrease the pH of the luminal content, promote reduction of Fe+3 to Fe+2, stimulate proliferation of epithelial cells to expand the absorptive surface area, and potentially stimulate expression of mineral-transport proteins in epithelial cells.

However, the authors point out, data available in the literature characterizing the enhancing properties of prebiotics on iron absorption are inconsistent, and mechanisms of actions involved are poorly understood. The notion that the colon can function as a significant site of iron absorption in response to stimulation by prebiotics and the effect of long-term exposure to prebiotics on the iron status of iron-deficient subjects remain to be clarified. A better understanding of prebiotics’ potential to enhance iron absorption and mechanisms of actions involved could lead to additional strategies for combating nutritional iron deficiency.

For a free download of the article, “Prebiotics and Iron Bioavailability—Is There a Connection?” by C.K. Yeung, R.P. Glahn, R.M. Welch, and D.D. Miller, visit www.ift.org/iron or see the June/July 2005 issue of Journal of Food Science, pp. R88-R92.

www.ift.org
Members Only: Read more about iron bioavailability online at www.ift.org. Type in the keywords in our search box in the upper left side of our home page.