In an earlier Processing column discussing hazard analysis (August 2003), consultant Richard Stier (phone 707-935-2829) listed the 12 most common foreign substances found in food as glass, metal, stones, wood, jewelry, insects, insulation, bone, plastic, personal effects, bullets, and needles. Any of these could cause injury and thus pose a hazard, but most are routinely removed by standard operations in food processing. This column discusses each of these materials in more detail and describes some of the instrumentation available for detection. 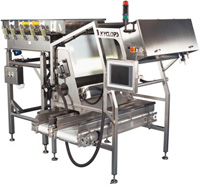 Types of Contaminants
Preventing foreign matter contamination of foods depends on understanding the source of each potential material and taking appropriate steps to prevent contamination. Even after installing such steps, most manufacturers rely on some final inspection to ensure safe and unadulterated food.

• Glass. Glass chips may be created by breaking of glass containers or by accidental breaking of light fixtures or windows. Glass containers are routinely cleaned before filling, and filling lines are designed to prevent jams and bottle-to-bottle contact. Nonetheless, glass containers do break. When they do, normal practice is to stop the line, clean thoroughly, and put on hold products filled before and after the break. The number of such containers (or the time period involved) is a matter of company policy. Obviously, enough must be held and reinspected to ensure safety, but such reinspection incurs cost. Increasingly, glass containers are being replaced with plastic for use with soft drinks, baby food, and mayonnaise, in part because such containers are unbreakable and also lighter.

Light fixtures should have shields, usually plastic sleeves on fluorescent tubes, to prevent contamination. Other sources of glass, such as laboratory vessels, should not be permitted in food-contact areas. Normal architectural practice is not to have windows in such areas, but many existing plants do have windows, and some natural light is considered desirable. Windows can have plastic panes, often made of polycarbonate, or safety glass that will not shed pieces if broken.

Glass is hard to detect because it is transparent and not electroconducting. More and more companies have established both glass breakage policies and programs to inventory all glass in plants. Many buyers also mandate these programs as part of their purchasing agreement.

• Metal. Metal contamination may come from metal-to-metal wear, loose machine parts, staples, broken screens, wire snipped during maintenance, tools, and broken structural members. Stainless steel is the most common metal encountered in food plants, since so much equipment is made of it, but iron, copper, aluminum, and mild steel can all be encountered. Proper maintenance to ensure correct clearances in close-tolerance equipment, such as pumps, and careful attention in opening bags and performing repairs can prevent some metal contamination. Fortunately, metal is relatively easy to detect.

• Stones. Field stones can be a common contaminant of many raw materials, especially cereal grains. Special equipment for cereals and other seeds rely on size and density differences to remove field stones, so they rarely are found in foods. Cherry pits and fruit seeds may also be found, despite efforts to remove them. Label warnings are common for cherry pits, since the best efforts to keep them out of pie fillings and jams are still not perfect.

• Wood. A common source of wood contamination is from pallets, widely used in shipping raw materials and finished goods. Pallets should be kept in good condition, and many plants have a special area for repairing pallets. A good practice is to use plastic or metal pallets in food-contact areas, keeping wood pallets in shipping and receiving areas. Wood pieces are easily removed by sifting and screening, so wood is rarely found in food.

• Jewelry. Jewelry gets into food by falling from workers or visitors. The obvious and common practice is to forbid wearing of jewelry in food-contact areas. This includes wristwatches, rings with stones (wedding bands are usually allowed), earrings, body piercings, and necklaces. Fortunately, most jewelry is relatively large and often is made of metal that can be detected, but small gemstones can be more difficult to find.

• Insects. Many foods, such as grains, are almost always contaminated by insects. Some are routinely fumigated with chemicals, but the list of acceptable agents is reduced because most are toxic or may threaten the ozone layer. Some facilities can be heat treated to kill insects, but this may require that the plant, especially control systems, be designed for extreme conditions. Carbon dioxide can be used for fumigation, but can present a hazard to workers. Flours are routinely processed through a pin mill to break up and kill insect eggs that might hatch if left alone. Powdered foods are sifted and screened to remove insect parts, and the normal processes for liquid foods kill and help remove insects. There are federally mandated action levels for insect parts in foods, meaning that a minimal level is permitted, on the reasoning that complete removal is impossible.

• Insulation. Fiberglass and polystyrene foam are common insulation materials found in food plants and therefore potential sources of contamination. Spray-on fireproofing may also be found. Good practice is to sheath insulation in washable sleeves and to enclose fireproofed structural members. If pieces of insulation do break off, usually they are so large that they are removed by screening or other operations.

• Bone. Bone can be found in any meat or meat-containing product and can be difficult to detect. Often meat is ground, so bone chips are also relatively small and more of a nuisance than a hazard. Meat grinders have bone-removal plates that do a good job, but efforts to increase yields may mean accepting more bone than is desirable. Use of meat recovered from mechanically deboned material may increase the probability of having bone chips. There are federal standards for calcium content of such recovered material to reduce bone content. USDA does not consider the presence of chicken bones in meats a hazard as it is natural. Some buyers may have their own standards.

• Plastic. The most common source of plastic contamination in foods is probably from packaging, such as polymer bag liners for drums of ingredients, shrink wrap or stretch wrap from pallets, plastic machine parts (such as gaskets), and food wrappers from snacks. The last can be prevented by forbidding eating in a food-contact area, which is common practice. The others are prevented by care in slitting bags, careful maintenance of equipment, and isolating removal of pallet wraps from use points. Plastic is usually removed by screening but can be hard to detect. More and more processors package bulk powders in blue liners, as blue is easier to see and remove. Along these same lines, many buyers mandate the use of colored plastic liner bags.

• Personal Effects. These may include pens and pencils falling from shirt pockets, tools, notebooks, coins, and other objects. Good practice is to forbid anything loose above the waist. Many uniforms and smocks do not have shirt pockets for just this reason. Most such objects are large enough to be easily detected and removed if they do get into the food stream. If they are found, there is a chance that it is because of a deliberate act.

• Bullets. Sadly, it is not uncommon for meat animals to be shot accidentally or deliberately. While wounded, they often recover, and the bullet or shot may remain in the meat. Typically, the bullet or shot can be detected in several ways.

• Needles. Needles get into meat when an animal twitches while receiving an injection from a veterinarian and the needle breaks off. Such needles are deliberately made of carbon steel so they can be easily detected and removed.

In addition to detecting nonmetallic contaminants, X-ray is often used in place of a metal detector, where metallic packaging (e.g., foil or metallized film) prevents use of a conventional metal detector or seriously compromises its sensitivity. A common example would be pies on aluminum foil trays, or cookies in metallized film bags.

Also, some products are so conductive that the sensitivity of a metal detector (especially to stainless steel) is unacceptable. X-ray detects only density differences and is not influenced by product conductivity, so it is becoming more commonly used as a “better metal detector.” Pipeline X-ray systems have replaced metal detectors at a tomato sauce producer, and X-ray is increasingly becoming of interest to meat and cheese processors as well.

However, Young also points out that X-ray has its limitations. Detection relies on sufficient density and thickness of a contaminant so that it can be seen in contrast to the bulk food. Paper, plastic, and many rubbers are hard to see by any instrumental means. Some food manufacturers have chosen gasket materials, such as Viton, that are visible by X-ray. Also, both X-ray and conventional metal detection lose sensitivity as the package size increases, so most X-ray inspection is of single packages rather than cases.

X-ray inspection is more expensive than conventional metal detection, but prices have decreased over the past 20 years. In fact, Gary Wilson, President of Loma Systems, Carol Stream, Ill. (phone 630-681-2050) says that his company’s most recent device costs about 50% less than larger X-ray inspection machines, in part because it is designed for small-profile packages.

Conventional metal detectors are most sensitive to mild steel contamination but can detect stainless steel and other metals. Detection sensitivity is usually described in dimensions of millimeters, typified by small ball bearings. Thus metal dust or shavings, pins, and other small pieces may escape detection.

Sensitivity varies with type of metal. Ferrous metals are most easily detected, followed by nonferrous and stainless steel. As an example, a processor might establish sensitivities for the three metals as 2.5, 3.5, and 4.5 mm, respectively. Processors need to work with equipment suppliers to ensure that they do not strive to obtain a sensitivity that an instrument cannot achieve.

BEST n.v. (Belgian Electronic Sorting Technology) is a Belgian company that offers a range of optical sorting technologies designed to identify and remove foreign matter as well as visually defective food, according to Bjorn Thumas, Area Sales Manager (phone +32-0-16-396-396). The company’s devices use laser or other light sources and cameras to detect abnormalities and direct an air blast to remove them. The company also offers a detector that relies on natural fluorescence of certain foods to separate food from nonfood items or defects.

In the visible range of the spectrum, “color” determines the amount of light reflected from the product. However, in the infrared (IR) range, reflectivity is determined by the physical characteristics of the product, such as water, oil, etc. Because of the composition of their molecules, products will absorb infrared energy at specific wavelengths. In the IR range, foreign material such as white rocks and clear glass absorb large amounts of IR energy, compared to dry white beans. This allows for a clear difference and separation, irrespective of surface color.

Finally, ferrous metal, especially small particles, can be removed by in-line magnets, such as those made by Cesco Magnetics, Rohnert Park, Calif. (phone 707-585-2402), according to Marc Truslow, Operations Manager. While magnetic separators are made by several firms and all use rare-earth permanent magnets, according to Truslow, Cesco focuses on the food industry with sanitary designs. The company is promoting a Gauss meter for confirming that a magnet retains adequate strength. Many plants use a pull test, which is relatively primitive.

A magnet is meant to complement metal detection by other means, since it can remove particles too small to be detected, including shavings of stainless steel that become ferromagnetic by work hardening from wear. It is important when using a magnet to observe what it is catching and investigate the source of the contamination.