Although microwave ovens have provided several benefits in terms of speed and convenience, the full potential of microwave heating is far from being realized because of its disadvantages, such as non-uniformity of heating, edge overheating, soggy texture, and lack of browning. Several ways to improve these situations have developed through the years, in terms of the turntable and the mode stirrer that improve the uniformity of heating, changes in food composition and placement, use of active packages like shields and susceptors, and combining microwaves with other modes of heating. While these are in various stages of development, major issues remain about the quality of food heated in a microwave oven. 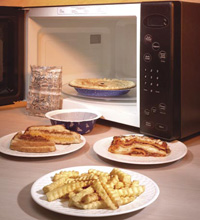 One of the primary difficulties with microwave heating is the undesirable moisture redistribution that results from a much faster rate of internal heating combined with cold surrounding air that cannot remove moisture. This causes surface accumulation of moisture. The rapid internal heating can produce internal pressures (Ni and Datta, 2002) and pressure-driven flow that piles on moisture a lot faster than can be removed by the colder surrounding air. Even if we are able to heat completely uniformly, the moisture accumulation from the surface will not be resolved. 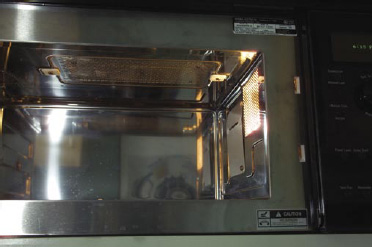 Increasingly, combination of microwaves with other modes of heating is seen as a practical solution to improve the uniformity of microwave heating and provide more control on the moisture transport while simultaneously increasing the speed of heating. Two particular combinations that are being pursued most vigorously in industry are microwaves combined with infrared and microwaves combined with jet-impingement heating, as shown in Figs. 1 and 2, respectively. 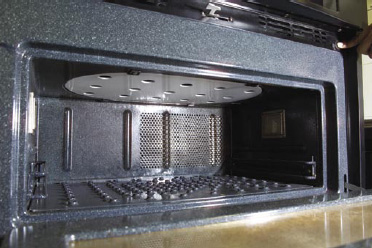 The heat transfer mechanisms are qualitatively different in infrared and jet-impingement heating than in microwave heating. Thus, while the individual modes are already complex, their combinations are much more so, and only a systematic study of the underlying principles of combination heating would provide the necessary knowledge base for a rational approach to the design of these combination ovens (Nicolai et al., 1999; Nitin and Karwe, 2001).

In this first round of studying combination ovens, we looked at the uniformity of heating as it is affected by the various modes of heating. Our overall objective was to evaluate the effectiveness of combination heating over microwave-only heating in terms of heating uniformity and rate of heating (or final temperatures achieved). We used two commercially available combination microwave ovens shown in Figs. 1 and 2.

Computer-Aided Modeling and Experiment
The microwave heat deposition patterns and the resulting temperature patterns in the interior of a food are quite difficult to obtain experimentally. Computer-aided modeling techniques that solve the complete physics of the problem in a comprehensive way are extremely useful tools in this regard.

The electromagnetic field distribution inside a microwave cavity and the food is governed by well-known Maxwell’s equations. Solving the set of Maxwell’s equations provides the rate of volumetric heat generation inside a food. Using this volumetric rate of heating, together with the equation describing heat conduction, temperature profiles can be calculated inside the food (Zhang and Datta, 2000). Parameters such as dielectric and thermal properties, heat flux at the surface due to infrared heating, and heat flux at the surface due to jet-impingement heating would come from additional computations or experimental data.

The solution process requires boundary conditions for the electromagnetics and the thermal problem. The inside walls of the oven are assumed to be perfect electrical conductors for the electromagnetic problem. The microwave excitation is provided by a waveguide in which waves propagate in the TE10 mode. The details of the mathematical model can be seen in Geedipalli (2004) and Almeida (2004).

Commercial modeling software ANSYS (ANSYS, Canonsburg, Pa.) and FIDAP (Fluent, Inc., Lebanon, N.H.) was used to solve the equations for electromagnetics and heat transfer, respectively. Since this is a computing-intensive problem, we used the supercomputer facilities of the NCSA at the University of Illinois. To validate the simulation results, temperatures in the food were measured using fiberoptic probes, and surface heat flux in jet-impingement heating and infrared heating were measured using a heat flux sensor. Potato was used as the food item of choice, as its engineering properties have been extensively studied.

Because we were concentrating on thermal aspects in an already complex situation, evaporation and moisture transport were not considered, and the experiments were limited to temperatures much lower than boiling. Our goal was to understand the primary effects of combining the heating modes on temperature (rate of increase and uniformity). To define temperature uniformity, although we considered many possibilities, we feel that the difference between 10th and 90th percentiles of temperature divided by the mean temperature rise gives the most reasonable measure of non-uniformity at that instant and is not unduly influenced by the extreme values. 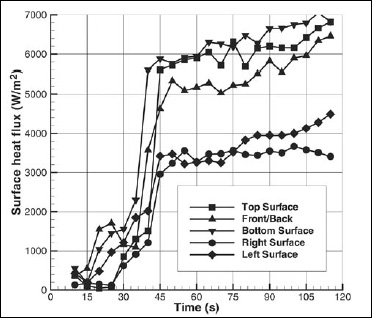 Fig. 4 shows the experimental and simulated plots for microwave-only heating and microwave with hot-air combination heating. These plots are for the locations of hot spot or highest temperature (typically near the surface) that is different for microwave and combination heating. There is good agreement, and the discrepancies in the higher temperature range are quite likely due to moisture loss being ignored in the model. The cycling of the temperatures is characteristic of magnetron on-off cycling of a microwave oven. The temperature decay in the microwave-only heating is the cooling of the hot spot to surrounding regions. The jet impingement heating does not have cycling associated with it, so when it is combined with microwave heating, the cooling effect is over-powered by the continued heating from jet impingement.

Fig. 5 is a temperature contour plot that provides a visual description of the temperature distribution at a section in the food for the different heating modes. The interior heating of microwave (with hot spots) can be clearly seen in the left figure, while the primarily surface heating of the hot-air jet can be seen in the middle figure. The temperature distribution for combination heating plot on the right clearly shows the advantages of improved uniformity while having a much higher surface temperature (than microwave-only heating) that can prevent sogginess and improve browning. 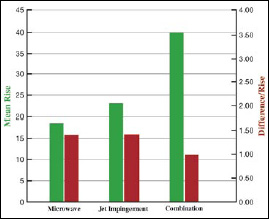 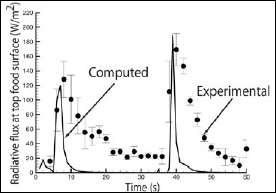 Combination with Infrared Heating
Infrared heating provides additional heat flux on the surface, as illustrated in Fig. 7. These fluxes are calculated by considering radiative heat exchange between the halogen heat source and the food. Heat fluxes obtained in this way are combined with the heat transfer model to obtain interior temperatures in the food.

Fig. 8 compares the measured and simulated temperature rise of the hot spot (in reference to microwave-only heating at the edge of the material, as shown later in Fig. 9) during microwave heating and microwave–infrared combination heating. Infrared heating also cycles on and off, and the cycling of infrared and microwave overlap. For the surface node, infrared heating dominates over microwave heating, which explains the more pronounced cycling (more accelerated decay of temperatures during the off portion of each cycle) in the combination heating. The near doubling of temperature rise in the initial ramp due to the addition of infrared is also a more noticeable effect due to the choice of the surface location.

Fig. 9 compares the qualitative description of the heating process using surface temperature contour plots for the food heated by microwave, infrared, and combination heating, respectively. The middle figure clearly shows the intense but relatively homogeneous surface heating of infrared radiation and contrasts with the left figure of microwave-only heating that has edge heating and intense internal heating (not shown). Combination microwave and infrared heating shows more homogeneous surface heating, moving the hot spot to the surface. Though it appears that infrared heating is more uniform than combination heating, this is not the case. Food-surface temperature is more uniform for infrared, but because of low penetration, it is highly non-uniform volumetrically. Thus, addition of infrared to microwave heating improves the uniformity in surface temperatures besides increasing the overall rate of heating.

As the microwave power level is increased, heating is dominated by microwave power, and the advantages of using combination heating decrease. Combination heating, however, would still be better than any individual mode of heating. Use of a higher infrared power level (with optimizing of the power cycling) can provide the higher surface temperatures needed to prevent sogginess and improve browning. 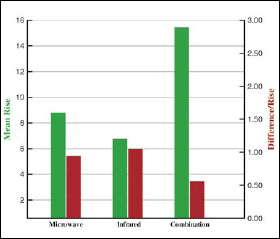 Combinations Offer Benefits
As indicated above, use of fundamentals-based models and associated experimentation of microwave heating combined with infrared heating and jet-impingement heating can provide a detailed understanding of rates of heating and temperature uniformity. Some general trends can be clearly seen. Combination heating, using hot-air jet-impingement heating or infrared heating, leads to a much higher rate of heating than microwave heating alone, being approximately equal to the sum of the rates due to the two individual modes of heating.

Perhaps the greatest benefit of combination heating, when the heating modes are complementary, is that it allows selective heating. Infrared and hot-air modes of heating are complementary to microwave heating, since they can act at different times and different spatial locations relative to microwave heating. This complementary nature allows us to combine them to increase the spatial uniformity of heating while simultaneously increasing the overall rate of heating. Edge overheating can be partially avoided, as the microwave power level can be kept to a lower value or the heating does not need to be carried on as long.

The selectivity of the combination heating reported here can also be exploited to improve moisture distribution inside the food. For example, the surface of a food can be heated faster, and that will help remove moisture easily from the surface and keep it crisp. Thus, the selectivity can be used to include the benefits of microwave heating (in a combination heating situation) when microwave heating alone is not a feasible solution.

As a general rule, in all modes of heating, there is a compromise between speed and uniformity. The faster the heating, the higher is the non-uniformity. Thus, there is generally a trade-off between speed and uniformity. The heating modes studied here were complementary for the specific combination of power levels and cycling, oven temperatures, and dielectric, thermal, and optical (pertaining to infrared heating) properties for combined microwave–jet-impingement heating and combined microwave–infrared heating.

One needs to be careful before generalizing these results for any food material shape, size, and properties, for any power level and cycling, and for the presence of evaporation. However, by generating results for various combinations of power levels and cycling, an optimum combination of power level can be found for a particular food process. This can significantly improve the speed, quality, and safety of food preparation, and provide a greatly increased ability to automate food processing at home and in industry, reducing frustration and wastage of time, energy, and food.

The authors greatly acknowledge the U.S. Dept. of Agriculture for a graduate fellowship; the oven manufacturers General Electric, Inc. and Enersyst Development Center for donating the combination microwave–infrared and combination microwave–hot-air-jet ovens, respectively; and the NCSA, University of Illinois, for supercomputing support.