Proteins are recovered and purified from a variety of sources for their nutritional and functional properties. In particular, proteins from oilseeds such as soy are valued components of human foods and animal feeds. Oilseed meals, after vegetable oil has been pressed and solvent extracted, may be extracted with acids and bases to dissolve proteins and separate them from carbohydrates. After neutralization, protein concentrates and isolates are produced, which may be formed by extrusion or spinning into fibers to simulate meats. 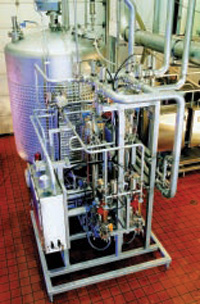 Proteins from other sources may be soluble, film-forming, or emulsifying in addition to providing vital nutrition. For example, whey protein fractions recovered by membrane processes from cheese whey can be used to form edible films and coatings, according to John Krochta, Professor of Food Science at the University of California, Davis (phone 530-752-2164). Krochta’s films can replace shellac in polishing chocolate confections and form moisture barriers between sauce and crust in frozen pizzas and other foods.

Concentrating Milk Protein
Several factors have combined to make ultrafiltration of raw milk on the farm attractive, according to Bruce Blanchard, Sales Manager for GEA Filtration, Hudson, Wis. (phone 715-386-9371). Dairy herds have gotten larger and more remote as dairy farms consolidate and seek less-expensive land. Many dairy farms are members of large cooperatives which also process milk into cheese and other products. The relatively weak dollar has made milk proteins attractive on the world market.

The process involves concentrating milk fat and protein while allowing water, lactose, and salts to permeate a membrane under pressure. The relatively porous membrane permits a higher flow at lower pressure than that required by a reverse osmosis membrane, which might retain more of the soluble and low-molecular-weight material. Since the concentrate is intended for cheese making, in which the sugars and salts are normally lost anyway, it is economical and efficient to remove them on the farm and save the cost of transporting the water. The farmer is first paid for his raw milk as normal, according to weight and fat content. The equipment may be owned by the farmer or by the processor.

Blanchard says that GEA sells a few units a year, but that they tend to be relatively large because the process makes the most sense for large operators. Some of the concentrate is dried to make milk protein concentrate, which may be used in processed cheese products. The permeate may be fed back to the dairy herd in limited quantities.

Concentrating Meat Protein
When meat animals are butchered, considerable quantities of trim are produced. These are sorted according to their lean meat content and sold to sausage makers or ground for hamburger. The higher the lean content, the more valuable the trimmings. Surplus fatty trimmings are rendered to recover the fat from beef and lard from pork as tallow.

Rendering involves cooking in large vessels, usually by direct steam injection, followed by centrifugation and drying of the fat and the protein fraction. The protein from edible rendering may be used in animal feeds, while that from inedible rendering is used as fertilizer.

If the trimmings have been handled in a sanitary fashion, the rendering is done under relatively mild conditions, and the fat is considered edible. Tallow and lard are valued in baking and frying, though nutritional concerns about saturated fats are affecting their use. The aqueous phase from the centrifuge is called stick water and may be concentrated as a source of beef flavor. If the stick water is not concentrated, it represents a significant waste disposal challenge.

If the raw material is not considered edible, the rendering conditions are typically more severe, and the fat is used for chemicals, such as soap and fatty acids.

A special form of rendering is used for bones, which after the fat and protein are cooked away are then extracted for gelatin. The strongest and most valuable grade of gelatin is used for photographic fi lm. The next strongest is used for pharmaceutical capsules (and paint balls), and the weakest form is used in foods. Gelatin is highly purified in the recovery process and is a uniquely functional protein.

In South America, especially Argentina and Brazil, range-fed beef is quite lean and relatively inexpensive. More than 100 years ago, the South American industry sought ways to export its beef without the benefit and cost of refrigeration. One innovation, developed by Sampco, Inc., Chicago, Ill., was to produce beef extract by cooking beef cuts in water and then concentrating the broth. Fat in the broth is separated, dried, and sold as edible tallow before the aqueous phase is concentrated by evaporation.

At first, the fully cooked beef was discarded, according to Dave Morrison, Sampco’s Chairman–CEO (phone 312-346-1506), but then the concept of canning the beef with curing agents to make corned beef was developed. The unique trapezohedron metal can still characteristic of canned corn beef was developed so that nested empty cans could be shipped economically. Morrison’s firm, the largest importer of South American beef to the United States, licensed an easy-open can end for its canned corn beef.

Later, the company canned uncured cooked ground beef from the extraction process and sold it as a protein ingredient for chili, taco filling, and other cooked products, where the relative absence of beef flavor can be compensated for by spices and flavorings.

An additional product line is a frozen cooked beef roll, made from larger cuts of meat which are also cooked for extract, then stuffed into a cellulose casing and frozen. These rolls may be sliced for frozen dinners or sandwiches, or diced for use in soups and stews.

The canned ground beef is sold as a high-protein ingredient, permitting the use of less-expensive fatty cuts or trim in a given formula while still achieving a target protein content for nutritional or functional reasons.

To prevent the introduction of foot-and-mouth disease, all meat from South America must be cooked before being imported, so the processes in which extract is manufactured and an inexpensive food ingredient is also created make a virtue from a necessity.

Retaining Functionality in Lean Beef
Beef Products, Inc., Dakota Dunes, S.D., has developed a unique process to concentrate lean meat from fatty trim in a sanitary and cost-effective way, according to Ron Yockey, Construction Manager (phone 605-217-8000). The company has four plants, all located close to large, midwestern meat-packing plants, from which they can obtain a reliable supply of fatty trim with low transportation costs. The overall concept is to concentrate the lean meat without losing its functionality. Unlike the South American process, there is no cooking step, so the company operates under extremely sanitary conditions.

The first step in the process is to remove any sinews by grinding and separating hard or tough pieces. Then the mass is tempered to near-post-mortem temperatures, about 105°F, at which point the fat is liquid but the meat does not cook. A centrifuge separates the lean phase from the liquid fat. The lean slurry is exposed to ammonia to increase the pH in a microbial reduction step. The fat phase is vacuum dried to produce edible tallow. The slurry is then frozen in sheets on a roller freezer, a 14-ft x 12-ft stainless-steel drum. In 90 sec, the sheet is frozen and scraped from the drum, broken into flakes, and packaged in 60-lb cartons. The entire process takes 7–9 min, which is a very short residence time for any food process.

All make-up air for the plant is washed and cooled with chilled sanitizing solution. The plant is designed for cleaning in place, including the drains, which are known to potentially be harbors for microorganisms such as Listeria. In some rooms, the walls and ceiling are stainless-steel panels, which facilitates washing and sanitation.

Beef Products designed and manufactured much of the equipment it needed and now offers some for sale to others. Examples include double-lobe positive-displacement pumps capable of handling the very thick slurries of meat in barely liquid fat and sturdy grinders. The equipment is designed for minimal maintenance.

Because the final product was unlike any other ingredient, at first, the company went through exhaustive testing to demonstrate its safety and effectiveness. Typically, customers use about 15% of it blended with other trimmings to make ground beef of a given protein content. The boneless lean beef is 94% lean, so customers can use less-expensive fatty trim to achieve a specific target. Customers are given specific advice on how to grind and blend the ingredient, and if the customer follows suggested practices, the company offers a buy-back guarantee.

The same process has been successfully tried on fatty pork trim, but has not been deployed.