Each of these diseases manifests different symptoms and involves differing genetics, transmissibility, and pathology. Scrapie and CWD, for example, are contagious, while BSE is not; and classical CJD is spontaneous, while GSS is hereditary.

The agents responsible for the TSEs are called prions, proteins that are unique in that they are devoid of nucleic acid. Not yet fully understood, prions are one of today’s great scientific enigmas. Isolated and named in 1982 by Stanley B. Prusiner, a “prion” (deriving from “proteinaceous infectious particle”) is an abnormally shaped infectious protein. This unusual agent exists in two forms—a normal non-infectious form (PRPC) and a pathological isoform (PRPres or PRPSC). The pathological form is extremely hardy, resisting protease digestion and surviving dry heat for 15 min at 600°C (Prusiner, 1998).

The normal PRPC form becomes infectious when its tertiary (three-dimensional) structure changes from a normal α-helix to a misfolded β-pleated sheet (see illustration on the next page), resulting in altered function, including the ability to damage cells. How TSE is manifested in a species is also determined by the magnitude and route of the host’s exposure to the PRPres and the host’s PRPC genome and age at exposure.

TSEs have disrupted trade and caused economic hardship for cattle producers, meat processors, feed manufacturers, and renderers. Changes have been necessitated in additional processing requirements, slaughtering and deboning techniques, handling procedures for specified risk materials, and labeling requirements. Significant disposal and waste-handling challenges have also arisen. From a regulatory perspective, TSEs have created the need for increased regulation and monitoring of meat processing and rendering facilities, concomitantly affecting the food and feed industries. Complicating all this is the ongoing evolution of our understanding of TSEs.

Epidemiological data strongly suggest that vCJD was transmitted to humans via consumption of BSE-contaminated meat products. Such contamination may have resulted from infected tissues being mixed with muscle meat through mechanical deboning systems. Importantly, muscle tissue itself has not been shown to carry infectivity (Brown, 2001).

As of May 2005 there have been 155 definite or probable vCJD cases and 150 vCJD-related deaths in the UK, seven cases in France, and one case each in Canada, Ireland, Italy, the U.S., Japan, and most recently, the Netherlands. A caveat to the Canadian, Irish, and U.S. (and likely the Japanese) cases is that all were diagnosed in people who had resided in the UK and were likely infected during that time.

Recent Developments
Until recently, BSE was associated with only one strain of PRPSC. Atypical cases of BSE in France and Italy, however, have led to the identification of a new bovine TSE form (bovine amyloidotic spongiform encephalopathy, BASE) in cattle. BASE has a different molecular weight, brain distribution, and cellular outcome than BSE. The discovery team found that this new form is similar in molecular structure to that of sporadic CJD, suggesting that it may not share the same origins as BSE.

CWD, endemic to Colorado and southern Wyoming and which has been identified in free-ranging cervids (deer and elk) across the U.S. from Nebraska to New York and in Saskatchewan in Canada, was recently shown to be capable of spread via residual infectivity from contaminated environments (Miller et al., 2004). Like scrapie, CWD has no known zoonotic potential; no strong link between CWD and human TSE cases has been identified.

CWD prions have been shown to convert, in vitro, human, cattle, and sheep prions to the abnormal form at very low rates (Raymond et al., 2000); however, epidemiological studies have not shown any strong evidence for transmission outside the cervid family or to humans (Belay et al., 2004). Nevertheless, the Centers for Disease Control and Prevention (Belay et al., 2004), the American Veterinary Medical Association, and many state public health and wildlife agencies have issued recommendations for handling precautions when dealing with game meat.

Government Responses
Lessons learned from the European experience with BSE, which began in 1986, have had a significant impact on the handling of BSE prevention around the world. Banning the practice of feeding ruminant-derived meat and bone meal (MBM) back to ruminants—a policy implemented in July 1988 in the UK—served as the primary defense for preventing transmission of the disease among the animal population, reflected in the immediate drop in number of new cases born in the year following the ban and each year subsequently.

The European Association for Animal Production recently suggested that the UK epidemic has neared an end and will not recur. Removal at slaughter of all tissues that accumulate the BSE infectious agent (known as specified risk materials or SRM) also protects against BSE transmission risk posed by subclinically infected cattle. Removal of SRM at slaughter serves as the single most important food safety risk mitigation intervention that helps to protect public health. Policies banning SRM from human food were implemented in the UK in 1989 and in the U.S. and Canada in 2004. Multiple other remedial interventions have been implemented by governments in Europe and North America.

Following confirmation of a positive BSE diagnosis in Northern Alberta, Canada in May 2003, the U.S., Mexico, and many other countries instituted a trade embargo, resulting in huge financial losses for Canada. Then, with the announcement in December 2003 of a positive BSE test in the state of Washington (later determined to be a Canadian import), countries around the world, including Japan—the largest importer of U.S. beef—banned U.S. beef imports.

Both Canada and the U.S. responded by implementing SRM removal strategies and enhanced surveillance. The U.S. later eased trade restrictions for Canadian beef and issued import permits after examining Canada’s risk mitigation strategies (e.g., SRM removal practices). Two additional BSE cases have been identified in Canada, and investigations are consistent with international experience—feed contaminated with BSE being the most likely source.

Meanwhile, enhanced U.S. surveillance has produced three inconclusive results, with two of the three confirmed negative by the “gold-standard” immuno-histochemistry (IHC) test. The third was initially confirmed negative, but upon retesting in late June 2005 by the SAF-immunoblot test, it was found to be positive for BSE. Fortunately, the safeguards enacted by the U.S. Dept. of Agriculture and the Food and Drug Administration following the December 2003 case prevented material from this cow from entering the human food supply. USDA has revised the surveillance protocol to include dual confirmatory testing (IHC and SAF-immunoblot) of all future inconclusive results. 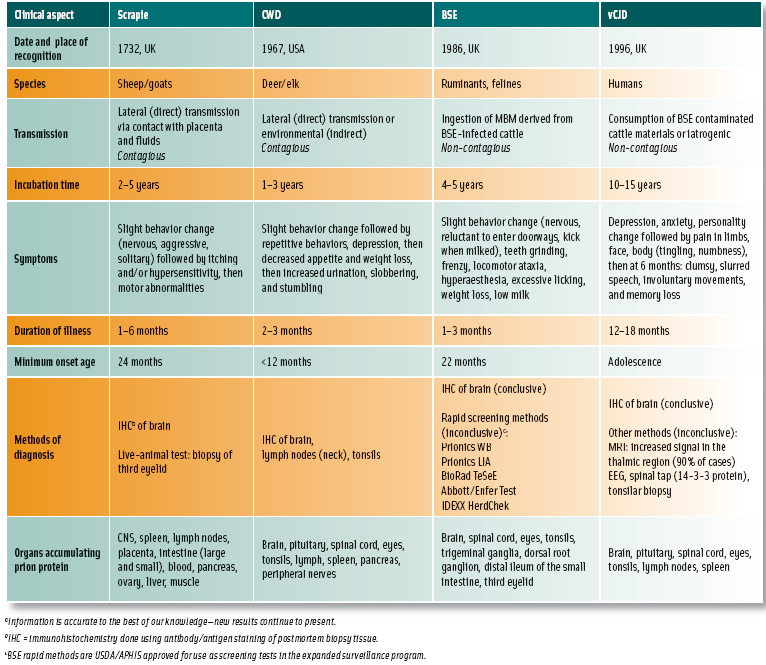 Japan confirmed its first case of BSE in September 2001 and Japanese per capita beef consumption dropped 42% in the following month, a disparity in consumer confidence compared with the U.S. and Canada. Japan began testing all slaughter cattle for BSE in October 2001 but did not implement widespread testing of cattle from the “high-risk” group until April 2004, a significant difference from the U.S. approach to surveillance.

Japan has tested more than 3 million cattle and had 17 BSE cases, two of which were reported in cattle only 21 and 23 months old. Positive diagnoses of cattle younger than 30 months have occurred rarely and are generally thought to be due to exposure to an unusually large dose of infective prions. However, one of these cases has been labeled “atypical,” and both remain questionable because they tested negative for BSE using the IHC test.

With the BSE case in the U.S., Japan initially insisted that to reestablish trade, the U.S. test all slaughter cattle. The U.S. argued, however, that testing cattle less than 30 months old has no scientific basis because BSE cannot be reliably detected early in the incubation period and detectable disease is extremely rare in young cattle. Discussions may result in a change to Japanese policy that could open the door to U.S. imports because 80% of U.S. slaughter cattle are 20 months of age or younger.

In October 2004, the governments of Japan and the U.S. stated that two-way trade could resume upon completion of regulatory processes currently underway in both countries (modification of testing procedures in Japan and implementation of import procedures by the U.S.) and development of a marketing program specifically for Japan. The marketing program, the Beef Export Verification Program, will result in certification by USDA’s Agricultural Marketing Service that U.S. beef and beef product exports meet requirements as presented in the agreement.

Looking to the Future
There are several areas in which food and animal science research would aid in dealing with the TSE challenge. The primary areas warranting focus are development of testing methodologies for detecting prions in live animals, and identifying products potentially contaminated with ruminant proteins or infectious tissue (SRM). Earlier detection of BSE in live animals would enhance surveillance systems, reduce the possibility of false-negative test results, and aid understanding of the epidemiology of BSE.

The U.S., Canada, and many other countries have mandated removal of SRM from the food supply and restricted slaughter and food processing practices that may lead to cross-contamination. Use of recycled mammalian materials were eliminated from ruminant feed six years prior to the first appearance of BSE in indigenous North American cattle, and extensive surveillance programs have been put into place. To date, these measures appear to have successfully protected public health and upheld consumer confidence in the regulatory system.

Nevertheless, science continues to evolve, and international trade remains significantly disrupted. The TSEs also pose a risk-communication challenge. Despite the rarity of vCJD, the disease is universally fatal (there are no effective treatments), it disproportionally affects young people, and gaps remain in our knowledge of the disease, all of which fuel public fear. Researchers continue to investigate the science of TSEs; and the need continues for increased funding and coordination of research and risk-management efforts, as well as extensive risk communication.