From lowering cholesterol and blood pressure to aiding in weight management and muscle recovery, proteins play an important role in today’s functional foods and beverages. Whether they are pure proteins, hydrolysates, or peptides, proteins are packing a punch in today’s products. 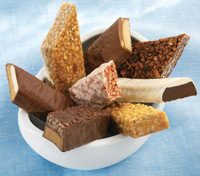 While dairy and soy garner the majority of attention in protein and bioactive peptides, other protein sources, such as eggs, peas, and gelatin, offer health benefits as well.

Dairy Proteins
In the dairy sector, whey protein has stepped into the limelight because of its benefits implied by research in areas such as sports nutrition and muscle development, weight control, and blood pressure reduction. “The continuing discovery of other potential health benefits that can be realized through dairy proteins continues to emerge in areas related to satiety and weight management, blood glucose control, insulin sensitivity, and immune health,” stated Pete Huth, Director, Regulatory and Research Transfer, Dairy Management, Inc., Rosemont, Ill.

Huth said that researchers at the University of Illinois have conducted clinical studies of the effects of a diet high in animal protein on body weight and body composition:

Dairy proteins, including whey, are the richest sources of a class of essential amino acids called branched-chain amino acids (BCAAs). Layman et al. (2003) showed that diets higher in protein and BCAA—in particular, leucine, which has the unique characteristic of controlling how carbohydrates and protein are metabolized in the body especially under conditions in which a subject would be losing weight, such as calorie restriction—help control blood sugar levels and reduce body fat and body weight while maintaining lean body mass.

In other areas of dairy protein research, Huth added, studies suggest that high blood pressure can be reduced significantly through bioactive protein components that can be released from casein and whey proteins. Pins and Keenan (2002) showed that enzymatically hydrolyzed whey protein isolates can lower systolic and diastolic blood pressure by as much as 11 and 7 mm Hg, respectively, in borderline hypertensive subjects.

Recent research has also linked both hydrolyzed whey and hydrolyzed casein to a reduced risk of infant allergies. Hays and Wood (2005) examined published literature to determine whether feeding hydrolyzed infant formulas from birth has a role in allergy prevention. The cohort of studies consistently showed reductions in the cumulative incidence of hereditary disease from 12 to 60 months of age among high-risk infants fed extensively hydrolyzed casein formulas or partially hydrolyzed whey formulas.

The various research findings have opened the door to some innovative dairy protein ingredient offerings from around the world:
• DMV International, the Netherlands, won the NutrAward at Nutracon/Supply Expo in March 2005 for C12 Peption, a hydrolyzed milk protein that has been shown to support the natural blood pressure mechanism. According to the company, a single administration of 1.7 g of the protein reduced diastolic blood pressure by 8 mm Hg and systolic blood pressure by 6 mm Hg in mildly hypertensive people.

• DSM Food Specialties, the Netherlands, offers PeptoPro®, a casein hydrolysate that is easily absorbed. The ingredient has been shown to provide energy directly to the muscles, helping to reduce fatigue, promoting faster recovery, and repairing damaged muscle tissue.

• Ingredia, France, offers Lactium™, a milk protein hydrolysate with regulating properties on stress. According to the company, clinical studies have shown the efficacy of the ingredient on different stress-linked troubles, such as a smaller increase in the mean blood pressure response to stress.

Soy Proteins
Soy protein still enjoys wide acceptance among consumers, particularly for its heart health benefits. “Consumers equate soy with health, and this message is spreading among mainstream consumers, which can be seen in the increase of soyfood sales in supermarkets,” observed Debbie Schulz, Market Development Manager, Cargill Health & Food Technologies, Wayzata, Minn. “We are also seeing this trend of soy equaling health spreading to Europe.”

Zhang et al. (2005) showed that eating soyfoods may reduce the risk of fracture in postmenopausal women. The researchers selected data on about 24,000 postmenopausal women participating in the Shanghai Women’s Health Study. The subjects completed a food frequency questionnaire and at followup 4.5 years later were asked if they had suffered any fractures. Higher soy protein consumption was significantly associated with lower risk of fracture. The inverse association was more pronounced among women in early menopause.

In October 2005, Monsanto and the Solae Co., St. Louis, Mo., announced plans to develop a new line of soy proteins with better taste and higher solubility. The companies said that the secret lies in the use of a soybean that has high levels of beta-conglycinin, a naturally occurring, texture- and flavor-improving compound. Using plant-breeding technology, Monsanto will develop the new soybean, and Solae will then isolate the protein from the beans and refine it to best suit a variety of applications.

• Gelatin. A protein obtained from collagen, gelatin is known for its many functional properties and use in the pharmaceutical industry. It also offers nutritional benefits, containing nine essential amino acids, according to PB Leiner, Jericho, N.Y. The company offers Polypro gelatin hydrolysates, which are said to be easier for the body to absorb and utilize.

A Positive Trend
“Diet, beverage, functional food, and sports markets are demanding nutritionally balanced proteins. To meet this demand,” observed Pasupuleti of SAI International, “the formulators have started to blend proteins or bioactive peptides and/or other ingredients to make up a complete nutritional profile and provide health benefits. This is a very positive trend we will see more of in the future.”