Aseptic and extended-shelf-life technologies are altering the very foundations of our fluid-food delivery systems. 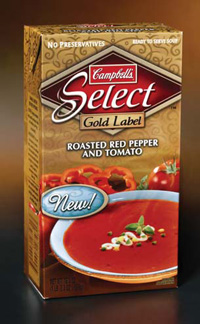 Not too long ago, after an extensive research program by an industry–government–university consortium, the Food and Drug Administration accepted a method for aseptically processing foods containing finite-size particulates. In 2005, Campbell Soup Co. began processing and packaging its Select particulate-laden soups in aseptic packaging equipment from SIG Combibloc (www.sig.biz).

Today, puddings are being packaged in slender flexible barrier-film tubes, paralleling the extended-shelf-life refrigerated yogurts that have converted the adult-targeted meal supplement into child-directed snacks (and, in the process, generated tube packaging of a host of other food products such as peanut butter and applesauce). Multi-flavor-layered shelf-stable puddings are aseptically packaged in barrier plastic cups. Juices are packaged in crystal-clear carafe-shaped polyester bottles. And baby food is now appearing in reclosable multilayer barrier-plastic cups.

For the past 20 or so years, Tom Szemplenski of Aseptic Resources ([email protected]) has been surveying, describing, and quantifying aseptic packaging for periodic publication by Packaging Strategies (www.packstrat.com). This article presents highlights of his 2005 report.

The Numbers
While the total number of installed aseptic packaging machines has not increased significantly since the beginning of this century, filling technology and the range and quantity of products have both grown substantially. In 1995, about 460 aseptic packaging systems were operating in the U.S.; in 1999, nearly 540 systems were producing about 15 billion units; and in 2005, nearly 560 installations were producing 10–12 billion units. The 1999 report indicated the presence of 23 different commercial aseptic packaging systems, while the 2005 report indicated 28 different systems, including 10 new ones. During the 1980s, more than 65 systems were offered to the market. Today, the number has dwindled to about half that number, not all of which are commercial in the U.S.

More than half of the systems in the U.S. are for retail packages. Tetra Pak (www.tetrapak.com) brick-package-type equipment dominates, with more than 170 machines. In the past, about three-fourths of the systems were for high-acid products such as fruit beverages; in 2005, about half were dedicated to low-acid liquid products. Among the rationales for the change is that perhaps bottled water, isotonic beverages, and ready-to-drink teas have cannibalized fruit beverage consumption. Another is that hot filling and hurdle technologies for high-acid beverages, including most of the teas, are easier to apply than the more complex aseptic processing and packaging.

A more telling statistic is the number of requests for regulatory acceptance of aseptic systems. FDA records reveal a cumulative 10,000 requests for low-acid aseptically processed and packaged foods, with more than 1,000 filed by more than 100 companies last year.

Aseptic vs ESL Systems
During the U.S. introductory period of the 1980s, aseptic was clearly defined as independent sterilization of product and package and assembly under sterile conditions to deliver packaged product capable of being distributed under ambient-temperature conditions (even though bio-chemical deterioration occurs during this period, the product is microbiologically safe). Too many concepts during that period knowingly or unknowingly were ready to compromise microbiological integrity to rush equipment into operation, with adverse consequences. Gradually, food packaging technologists assumed command, and most of the hazardous systems disappeared into history.

If the product is high acid, it may be sufficiently microbiologically stable to be distributed safely under ambient-temperature conditions. The best methods, however, are to use the chilled distribution system to better retain biochemical quality. If the product is low acid, such as the many flavored dairy products that have so dramatically affected the market, it must be distributed under refrigerated conditions.Chilled distribution is (probably correctly) perceived by target consumers to deliver a superior-quality product, so they pay a premium. Furthermore, reduced-temperature distribution provides retailers with higher margins and fewer returns, since the products have real shelf lives and expiration dates in the range of 50+ days, a true “win-win” packaged-product concept.

ESL Systems
More than a dozen different ESL systems are offered in the U.S., the majority engineered for polyester bottles, and a few for plastic cups.

Plastic cup systems for coffee lighteners, such as Genpak’s Purity Packaging and Winpak Portion Pak (www.winpak.com), rely on presterilization of the nested cups and the roll-stock flexible-closure materials by ionizing radiation, followed by ultra-clean transfer of the materials into the presterilized machine. Hamba (www.hamba.de) systems for puddings employ in-line treatment of preformed package cups and closure materials with hydrogen peroxide, operating as if the system were sterile. Generally, in all systems, product is sterilized by ultra-high-temperature, short-time thermal treatment.

Among the systems using this general protocol are Serac (www.serac-usa.com), Sidel Remy (www.sidel.com), now part of Tetra Pak, Krones (www.kronesusa.com), KHS (www.khs-inc.com), and Procomac (fitzproco@aol.com), all of which produce rotary filling equipment capable of outputs in the range of 200–400 bottles/min.

Stork (linear) equipment for low-acid products such as coffee beverages extrusion blow molds plastic bottles in line, then sterilizes them by flooding with hydrogen peroxide, followed by water rinsing and draining.

Evergreen, Elopak, and Tetra Pak ESL systems operate on much the same principles as the polyester bottle systems. Knocked-down paperboard/plastic/aluminum foil laminated cartons are erected on the machine and sprayed with the peracetic acid/hydrogen peroxide prior to filling.

Aseptic Systems
A number of aseptic packaging systems are available:
• Thermoform/Fill/Seal. With the conversion of so many baby foods into barrier plastic cups with heat-seal flexible closures and snap-on plastic overcaps, the market for aseptic plastic cup equipment will probably mushroom in the coming years.

Hassia (http://hassiausa.com) appears to have taken the lead from Robert Bosch (www.bosch.de/vm) with its placements at Gerber for both high- and low-acid baby foods. Both are thermoform/fill/seal systems beginning with roll-stock barrier-plastic sheet for the cup. Bosch employs traditional high-concentration/high-temperature hydrogen peroxide for package material sterilization, while Hassia uses high-temperature/high-pressure steam. One claimed advantage is the absence of any residual with the Hassia, although, of course, Bosch machinery does not suffer from measurable chemical sterilant residual. Both are capable of achieving high output rates of up to 700 cups/min.

• Tetra Pak Wedge. In addition to its standard aseptic vertical form/fill/seal machines for brick shapes, Tetra Pak has introduced a Tetra Wedge package in both paperboard/aluminum foil/plastic and transparent silica-coated-polyester-lamination versions. Juices and culinary sauces have both debuted in the new package. Both Tetra Pak and Combibloc have introduced plastic reclosure spouts for their brick-shaped aseptic paperboard-lamination packages.

• Bottle Systems. Most of the plastic-bottle-filling-machinery suppliers have debuted aseptic versions in the U.S., including Krones, Procomac, Serac, Stork, Bosch, KHS, and Sidel. Most are currently being applied for high-acid beverages. Japan’s Shibuya (www.shibuya-int.com) has a high-acid machine in commercial use. Bosch, Shibuya, Stork, and Sidel equipment have reportedly been validated for low-acid products such as dairy foods by FDA, and some are operating in this mode today.

• Bag-in-Box Systems. Nearly one dozen suppliers of aseptic bag-in-box systems are operational for both institutional and industrial bulk ingredients. Generally, the barrier bags are presterilized by ionizing radiation and filled under aseptic conditions. Most of the systems are being applied for high-acid foods such as ketchup, tomato concentrates, fruit purees, juice concentrates, and, for refrigerated distribution, liquid egg. Several of the suppliers have received FDA approval for low-acid aseptic packaging, including Scholle (www.bagnbox.com), DuPont Canada (www.ca.dupont.com), FMC FranRica (www.fmctechnologies.com), and Astepo (www.astepo.com).

Alive and Thriving
With the commercialization of aseptic packaging of particulates and the rapid expansion of ESL for both high- and low-acid foods, it is evident that aseptic is alive and thriving in America.

Both traditional and new food and beverage products warrant re-examination to ascertain if the new generations of aseptic might be applicable to better serving consumer and customer desires.