Liquids and solids are mixed and blended for many reasons in food processing. 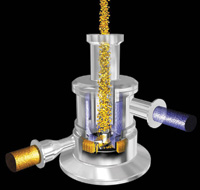 Some common examples include dispersing gums and stabilizers in ice cream mix; dissolving salt and sugar in water to make brines; suspending vegetables and meat pieces in broth for soups and sauces; mixing oil, eggs, and vinegar to make mayonnaise; and dispersing water in flour to make bread dough.

Some of the parameters that distinguish different regimes of mixing include the proportion of solid to liquid, the viscosity of the final mix, the solubility of the solids, and the presence of other materials, such as a second liquid phase.

As in other mass transfer and fluid flow situations, it matters whether the flow is turbulent or laminar. For mixing using an impeller, typically a multi-bladed rotor on a shaft, the flow pattern is characterized by the Reynold’s number, Re = ND2ρ/μ, where N is agitator speed in revolutions/sec; D is impeller diameter in meters; r is fluid density in kg/m3; and μ is fluid viscosity in Pascal-sec. High values of Re indicate turbulent flow, while low values indicate laminar flow. Mixing is more effective with turbulence, but this may be difficult to achieve with high-viscosity mixtures.

The power consumed by an agitator is a function of Re and typically depends on the impeller and vessel design. The dimensionless power number Po = P/ρN3D5, where P is power in watts and the other symbols have the same meaning as previously given, can be correlated with the dimensionless Re for use in scale-up.

For miscible liquids, time to reach a satisfactory degree of homogeneity is often estimated as requiring about 4 or 5 turnovers of vessel contents, according to Mark Lovallo, Technology Manager, EKATO Corp., Ramsey, N.J. (phone 201-825-4684). EKATO is a German company that offers solids mixing equipment, liquid–solids mixing equipment, mechanical seals, agitators, and complete process skids. He and his colleagues published a review of mixing theory in the April 2006 issue of Chemical Engineering.

Some of EKATO’s liquid–solids mixers address the challenge of heavy suspensions, which often are highly viscous. Their special agitators may include helical ribbons, which lift the more-stagnant regions near the wall to cause circulation. It is interesting to speculate whether this design might work for heavy bread dough.

High-Shear Mixers
The Breddo Likwifier is familiar to many food processors. It looks much like a bar blender or kitchen food processor, except that it is much larger. Bill Wade, Equipment Director, American Ingredients Inc. (Breddo’s parent company), Kansas City, Mo. (phone 800-669-4092) explained that the machine was developed to help customers disperse dairy stabilizers, which have a tendency to form "fish eyes," lumps of powder that are wet on the outside, which prevents the inside from being wetted. It takes high local shear to break down such particles and completely hydrate the powder. The Likwifier uses a bottom-entering agitator shaft with slanted blades to create high circulation rates and high local shear rates.

A bottom-entering shaft has the advantage that it can be shorter and thinner than a top-entering shaft to deliver the same power because the impeller is close to the bottom and thus immersed in the liquid. By being submerged deeper, the agitator also incorporates less air than would an impeller located higher in the vessel. On the other hand, a bottom-entering shaft requires a good mechanical seal to prevent leaking of the liquid or contamination from the outside. Mechanical seals are subject to abrasion and wear from the solids being mixed and often require disassembly for cleaning. This can create damage from misalignment during reassembly.

Breddo has developed a water-flushed seal in which most of the parts are outside the vessel. The water flushing also cools the seal, reducing wear. Many of the company’s vessels are square, making them self-baffling while still easy to clean. They also make round vessels, and both round and square vessels may be jacketed for heating or cooling. Some mixers have scraped-surface agitators to promote heat transfer and to help circulate viscous mixes.

Microfluidics, Newton, Mass. offers Sanitary Laboratory Homogenizers. Lightweight, versatile, portable, and easy to use, these patented Microfluidizer® homogenizers are suited for a range of applications, including emulsions, dispersions, cosmetics, pharmaceuticals, liposomes, and food and beverage products, according to Bob Bruno, President (phone 800-370-5452).

Microfluidizer processors impart controllable shear rates on the product stream by producing process pressures from 2,500 psi to more than 40,000 psi. This is accomplished with a combination of constant-pressure intensifier pumps and fixed-geometry interaction chambers, resulting in nanoparticles with extremely narrow distribution, translating into highly stable products with long shelf life.

The homogenizers combine high flow rates with fixed-geometry modules to impart high shear rates and produce up to 8,000 psi with standard lab air through intensifier pumps.

A special category of high-shear mixers is rotor/stator mixers, in which a specially designed impeller rotates, usually at high speed, inside a stationary ring containing slots. Fluid is drawn into the rotating part and expelled through the slots, creating very high shear in a small volume.

Ross makes a full line of mixing equipment and may be best known for "can" mixers, in which the vessel can be removed and used to transport its contents to packaging or further processing. Quadro makes a family of devices in which fluid is pumped through a high-intensity zone, where it is combined with solids and then transferred to another vessel. The company also offers in-vessel dispersers, where the solids are introduced directly to the high-shear zone rather than being added to the surface of the fluid.

Lancaster builds a unique family of machines in which the vessel or pan rotates in one direction while various tools, including side and bottom scrapers, and rotating impellers rotate in the opposite direction. The application seems best suited for viscous pastes in which, without the extra tools, the fluid would not move naturally into the high-shear zone.

Silverson makes equipment comparable in function to that of Quadro, in which a low-pressure zone is created by the rotation of an impeller in a chamber so that fluid and solids can be combined and pumped to the next step in the process.

Sometimes, in circulating systems, the fluid is recycled back to the feed tank until a batch is uniform. IKA makes a line of high-intensity mixers, often as complete systems, some with rotor stator agitators and others with helical or spiral agitators.

Mechanical Design Important
In considering a mixer type and specific vendor, it is well to understand the various design issues involved.

When power is applied through a shaft to a body of fluid, various mechanical forces are created, especially if the fluid is viscous and there is a high concentration of solids. One force tends to push back on the shaft. This is resisted by a thrust bearing. There can be forces tending to bend the shaft, which are resisted by the thickness and material strength of the shaft. The shaft and impeller also impose their own weight on the drive system. The longer the shaft and higher the speed, the more tendency there is for misalignment, with the risk of bearing failure. As previously mentioned, if the shaft enters through the liquid, there must be a mechanical seal. If the vessel is under pressure, even a top-entering shaft must have a seal to prevent leakage of gas.

Every vessel has a working volume which is less than its actual volume, usually about 70%. There is also a minimum volume below which the agitator is not submerged. Without the resistance of fluid, a running agitator can damage itself if not properly designed.

For food processing, it is important that mixers be easily cleaned, which means that they are usually built of stainless steel, with polished surfaces and rounded joints. If designed for cleaning in place, it is important that cleaning spray balls or nozzles cover all surfaces. Connections should be made as close to the vessel wall as possible to make cleaning easier.

Most vendors offer lab- or pilot-scale versions of their designs that can be used for scale-up. Remember that the correlations for power and mixing effectiveness are highly dependent on the specific impeller and vessel design.

With some experience, an appropriate choice among the many possibilities can be made.