Since irradiation was last discussed in this space (March 2003), there have been some interesting developments, according to Martin Stein, CEO of Gray*Star, Inc., Mt. Arlington, N.J. (phone 973-398-3331, www.graystarinc.com). Gray*Star is one of two North American suppliers of cobalt 60 irradiators. The other is MDS Nordion Ottawa, Ontario, Canada (www.mdsnordion.com), which also supplies the cobalt 60 sources and other radiation technologies. 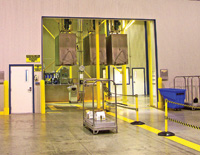 Gray*Star's first installation of its Genesis design in the United States, at CFC Logistics in Hatfield, Pa., operated for about 18 months, then was shut down because its parent company decided to leave the irradiation business. The system had been used for fresh and frozen meat and poultry, which had been well accepted in the market.

Another development was the demise of SureBeam, Inc. of San Diego, Calif., which had been a major supplier and operator of electron-beam irradiators. SureBeam was evidently a victim of fraudulent accounting and was taken over by its former parent, Titan, a diversified defense-related firm in San Diego, Calif. One of its service centers in Sioux City, Iowa, was acquired by Sadex, a Texas-based firm, but the episode left some customers without a source of irradiated ground beef, which had become a successful product in some supermarkets.

The impetus for irradiating ground meat had been concern about Escherichia coli, Listeria, and Salmonella. The meat industry became more focused for a while on BSE (mad cow disease), which is not addressed by irradiation. Now, attention is shifting back to the pathogens, for some of which there is a zero-tolerance policy. Irradiation is one of the better ways to ensure the safety of fresh and frozen meat and poultry.

Post-processing contamination of ready-to-eat meat products, such as sausages, lunchmeats, and cooked ham, especially with Listeria, is a serious concern. A petition to the Food and Drug Administration to allow irradiation of ready-to-eat foods has been pending for several years. Irradiation is defined as an additive for regulatory purposes, even though it clearly is a process and very little is changed in the food. This status has slowed the approval process, but Stein believes that approval may occur soon. This could create significant demand for new irradiation capacity.

Brief Review of Irradiation
The three sources of ionizing radiation used for food and other objects are radioactive isotopes that emit gamma rays, electron beams, and X-rays. The gamma source is cobalt 60, which is a solid metal. Electron beams are created by accelerators, which direct a high-energy stream of electrons to a target. X-rays are generated by bombarding a metal target with an electron beam to create high-energy photons.

Irradiation works by creating energetic electrons and free radicals in the product being treated. These are reactive species, which can interact with chemicals in cells and interrupt cell division. The same species can react with other components of food, but at the levels of radiation energy typically used there are rarely any noticeable effects on flavor, color, or nutritive value.

The unit of radiation energy is the Gray (Gy), defined as 1 Joule/kg; 1 kGy is about 0.4 BTU/lb, which is not enough thermal energy to raise the temperature of food by even 0.5B0F. Typical values of radiation energy applied to foods range from 50 Gy to about 4 kGy.

In addition to reducing pathogens on meat and poultry, irradiation can reduce sprouting in potatoes, extend shelf life of fruits such as strawberries, and reduce insect populations on tropical fruits such as mangoes and papayas.

Stein pointed out that almost all spices, herbs, and dried vegetables imported into the U.S. have been irradiated, typically at 10 kGy, to sterilize and sanitize.

Irradiated foods sold to consumers are labeled with the radura, a distinct symbol adopted internationally. However, products used in foodservice or as components of other foods need not be labeled as irradiated.

The impact of radiation on quality is product specific and must be studied carefully. Once effective minimum and maximum levels are determined, the process is carefully controlled to stay within the limits. Dosimetry is the technology for measuring the amount of energy delivered. It is typically accomplished by placing carefully calibrated devices, which may be small pieces of polymer or solid-state semiconductors, throughout the load of packaged product. The response to the radiation is in proportion to the dose to which it is exposed. After the process is complete, the devices are recovered and the color or other change in property measured. In the Genesis equipment, a load may be partially irradiated, the dose measured, then the process resumed for an appropriate time to reach the target dose.

The Nuclear Regulatory Commission defines categories of irradiators. Categories I and II are not used for food.

Cobalt irradiation may occur in air or under water. In any case, the source, which is an array of "pencils" held in a rack, is stored under water, which is a good shield for gamma radiation. In a Category IV irradiator, products are stacked in special carriers and conveyed through a maze, which is shielded by concrete walls about 7 ft thick. The source is withdrawn from its storage tank and the carriers follow a serpentine course around the source to provide even exposure to the gamma rays, which are emitted in all directions.

In the Genesis irradiator, a Category III design, the source always remains under at least 12 ft of water. Product, about 800 lb at a time, is loaded into a thin-walled steel bell which is lowered into the pool. Compressed air keeps the product dry and permits the gamma rays to reach the product. The bell is lowered close to the source and after a while is lifted and placed on the other side to provide uniform exposure. There is no need for heavy shielding to protect workers, the public or the environment.

Cobalt 60 has a half-life of 5.27 years, so it loses its power at the rate of about 1% per month. Periodically, older pencils are replaced with new ones. The pencils are moved around in the rack to maintain a uniform energy flux.

Book Discusses Irradiation Research
Irradiation of Food and Packaging edited by Vanee Komolprasert and Kim M. Morehouse and published in 2004 by the American Chemical Society, has 21 chapters by various authors. A consistent theme is the interaction among preservation, safety, and quality.

For example, Chapter 7, by K.T. Rajkowshi and X. Fan, discusses irradiation of seeds intended for sprouting. The authors point out that a radiation dose high enough to give a 5-log reduction of some resistant pathogens would also kill the seed.

Chapter 8, by B.S. Patil, discusses how irradiation improved functional components of fruits and vegetables. An example is increase in quercetin concentration in onions after relatively low doses. Quercetin is believed to have beneficial biological activity against cancer. Irradiation also seemed to increase flavanol concentration in citrus. This could be a positive side effect of irradiation to reduce insect pests traveling on fresh fruit.

Radiation is known to interact with polymers such as those used in food packaging. One effect can be chain scission, or the reduction in molecular weight of the polymer. Smaller fragments might have a greater tendency to migrate into food with which they are in contact. Radiation also can increase cross-linking, which increases molecular weight and would reduce migration of chemicals.

The research in this area typically involves sensitive analysis of headspace volatiles before and after irradiation. It generally takes relatively high doses before significant amounts of new chemicals are detected.

Some packages used for bulk aseptic storage—large laminated film bags—are sterilized by irradiation before filling. Research has shown that there is no impact on seal strength even at very high doses.

One interesting chapter reported the deleterious effect of very high doses of radiation from electron beams on items sent through the mail to the Smithsonian Institution in Washington, D.C. After the anthrax incidents in 2001, all mail going to government agencies was irradiated by electron beams at doses of 50 kGy or more. Polymer objects, such as photo slide mounts, computer disks, and polymer packaging materials were warped and damaged. Paper lost its strength and discolored. Inks and toners melted and ran. Some of the effects were attributed to high temperatures reached in the equipment. The doses were deliberately very high to ensure that spores were killed, but to achieve adequate penetration with electron beams—which are far less penetrating than gamma rays or X-rays—required very high energies and long exposures. One solution is to use thinner bundles of mail.

On the Brink of Expansion
Irradiation appears poised on the brink of significant expansion, once the ready-to-eat petition is approved. Consumers are in fact buying irradiated food when given the chance. Both conventional (Category IV) and the more novel Genesis (Category III) irradiators are commercially available. The science to determine required doses and to control operations safely and economically is well established. Costs are reasonable, typically pennies per pound, given the significant health and quality benefits.