New York City’s Dept. of Health (www.nyc.gov/health) on December 5, 2006, voted to ban all but trace amounts of artificial trans fats in restaurant cooking. Restaurants will have to eliminate margarines, oils, and shortenings used for spreading and frying that contain more than 0.5 g of trans fat/serving by July 1, 2007, and then remove from menus all food items that exceed that limit by July 1, 2008. 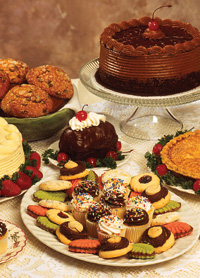 This is arguably the most significant municipal health-related regulation since New York City amended its anti-smoking law in 2003 to include all restaurants and bars.

Defining the Culprit
Trans fats—unsaturated fats that can be monounsaturated or polyunsaturated—occur naturally, in small quantities, in meat and dairy products; however, most trans fats consumed today are created as a result of the partial hydrogenation of plant oils, a process developed in 1901 by the German chemist Wilhelm Normann. In 1909, Procter & Gamble Co. acquired the United States rights to Normann’s 1902 patent, and in 1911, it began marketing the first hydrogenated shortening, Crisco, which was composed largely of partially hydrogenated cottonseed oil.

Partial hydrogenation changes a fat’s molecular structure, which can affect its melting point or shelf stability, as well as its configuration. The change in configuration results in a proportion of the fat becoming trans fat, says Magdi Mossoba ([email protected]), Research Chemist with the Food and Drug Administration’s Center for Food Safety and Applied Nutrition, Office of Scientific Analysis and Support, College Park, Md.

"Chemically, trans fats are made of the same building blocks as non-trans fats, but have a different shape," Mossoba explains. "In trans fat molecules, the double bonds between carbon atoms (characteristic of all unsaturated fats) are in the trans rather than the cis configuration, resulting in a straighter, rather than a kinked, shape. As a result, trans fats are less fluid and have a higher melting point than the equivalent cis fats."

FDA defines trans fats as fats that contain one or more trans linkages that are not in a conjugated system. "This is an important distinction, as it distinguishes non-conjugated synthetic trans fats from naturally occurring fatty acids with conjugated trans double bonds, such as conjugated linoleic acid," Mossoba emphasizes.

Trans fats from partially hydrogenated oils are generally considered to be more of a health risk than those occurring naturally. Peer-reviewed scientific research shows that eating trans fat increases the risk of coronary heart disease. Thus, health authorities worldwide recommend that the consumption of trans fat be reduced to trace amounts.

Limiting Consumption of Trans Fat
While New York is the first large U.S. city to strictly limit trans fats in foods served in restaurants, it is not the first municipality to do so. In 2005, the restaurant owners in Tiburon, Calif., decided to eliminate trans fats from food served in the town’s 18 restaurants, making it the first "trans fat–free city" in the country. It’s not a law, just a policy that all of the Tiburon restaurateurs reportedly embraced.

Other U.S. cities want to reduce or eliminate the use of trans fats in foods served in restaurants. Chicago is considering a ban on oils that contain trans fats used by large chain restaurants. On December 19, 2006, Massachusetts state representative Peter Koutoujian filed the first state-level legislation that would ban restaurants from preparing foods with trans fats.

Several major food chains have chosen to remove or reduce the amount of trans fats in their products. Last month, Starbucks Corp. announced that it would cut trans fats from the products in half its stores, including those in Seattle, Portland, San Francisco, Chicago, Los Angeles, San Diego, Boston, New York, Philadelphia, and Washington, D.C.

Walt Disney Co. on October 16, 2006, announced plans to eliminate trans fats from meals served at its U.S. theme parks by the end of 2007, and stop the inclusion of trans fats in licensed or promotional products by 2008.

In April 2004, the J.M. Smucker Co., the current American manufacturer of Crisco, released a new formulation made from solid, fully hydrogenated palm oil cut with soybean oil and sunflower oil. This blend is labeled has having 0 g of trans fat/serving (1 tablespoon), compared to 1.5 g/serving in original Crisco.

Trans Fat Labeling Law
On July 11, 2003, FDA issued a regulation requiring manufacturers to list trans fat on the Nutrition Facts panel of foods and some dietary supplements. The labeling rule allowed for immediate voluntary compliance, with mandatory compliance by January 1, 2006 (although companies were allowed the opportunity to petition for an extension to January 1, 2008).

FDA did not approve nutrient content claims such as "trans fat free" or "low trans fat." However, the agency is planning to conduct a consumer study to evaluate consumers’ understanding of such claims and perhaps consider a regulation allowing the claims’ use on packaged foods.

FDA allows trans fat levels of less than 0.5 g/serving to be labeled as 0 g/serving.

In the GC method, fat samples need to be converted into volatile fatty acid methyl esters before separation, Mossoba says.

"Separation is done using very long (100-meter) capillary columns coated with highly polar stationary phases," he explains. "These columns are essential to separate the many trans fatty acids generally present in commercial and milk fats. The trans fatty acid content is determined as the sum of all trans fatty acids in the chromatogram."

Infrared spectroscopy is based on the presence of an absorption band at 966 cm–1 (wavenumber), which is unique to all isolated trans bonds.

"All fatty acids exhibit that same absorption peak, regardless of the chain length or the position of the isolated trans double bond," Mossoba relates. "Thus, measuring the strength of the absorption of the trans band in effect gives a value for the combined total amount of all the fatty acids containing isolated trans double bonds. Infrared spectroscopy conveniently selects just what is needed for the trans fat measurement."

If double bonds are conjugated, the associated absorption bands are shifted to 985–990 cm–1 and to 940–950 cm–1. These bands may be resolved from the isolated trans band at 966 cm–1, depending on the relative abundance of conjugated fatty acids in the sample.

"This is precisely what is needed," Mossoba says, "because conjugated trans fatty acids are not included in the trans fat content that must be reported on label of food products."

Boerner estimates that since 2005, Microbac has conducted thousands of trans fat analyses for hundreds of clients around the world.

"The bulk of the testing started in 2005 as food processors had their products tested for trans fats in preparation of the 2006 labeling requirement," she relates. "In 2006, we did a lot of trans fat testing for reformulated products as food processors learned more about ‘bad’ trans fats and began substituting new fat/oil formulations developed by the edible oil industry that have zero or reduced amounts of trans fats."

Since 2005, she says, U.S. companies that import and foreign companies that export to the U.S. from China, Southeast Asia, Europe, and Great Britain have increasingly continued to request trans fat testing to meet the FDA labeling requirements. Imported foods, especially from China, are a growing market, and many imported foods in general, especially confectionery and baked goods, typically have a lot of trans fat.

"Before FDA implemented new labeling regulations for trans fat," she says, "we did a significant amount of trans fat testing for products being exported to Canada. Along with the United States, Australia and South Korea are now addressing the trans fat issue."

So what does the future hold? "I think trans fat testing will eventually go away," Boerner says. "The word out there is that trans fats are bad, so food processors and restaurants/fast foods will get rid of them as pressure mounts from health advocates and consumers. The influence of New York City’s ban on trans fat will trickle down to other states as food manufacturers eliminate trans fats from their products. If they want to compete, manufacturers will have to deal with trans fats because consumers will eventually purchase only products without them."

Nonetheless, Boerner doesn’t see people voluntarily changing their lives dramatically because of trans fats. "The main consumer dietary concerns are currently total fat, calories, and cholesterol," she observes. "Consumers have not yet focused on trans fat because they aren’t so familiar with it. But now that New York City has banned it, people will start asking ‘What is trans fat?’"