It may seem hard to justify the capital and operating costs of a proper pilot plant, and, in fact, many food companies have closed the ones they had. But this may be a very short-sighted decision, driven by an inadequate understanding of costs and benefits, as I’ll try to demonstrate. 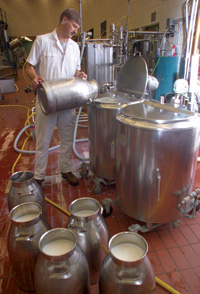 Types of Pilot Plants
As I discussed in my previous article on pilot plants (May 2004, pp. 72–75), academic institutions, food companies, and equipment suppliers might have different types of pilot plants.

The emphasis in a university is on education, research, and service. Its pilot plant, if it has one—as many food science and agricultural engineering departments do—must be flexible, with plenty of plug-in utilities and roll-in/roll-out equipment. Often, depending on the institution’s history, the pilot plant may focus on a specific industry such as dairy, baking, or soy processing. Some universities have had a tradition of manufacturing food products, such as cheese, ice cream, and sausage, which they sell to students and local residents.

Chemical engineering departments often have a unit operations laboratory, which is rarely much of a pilot plant in the sense that its equipment usually cannot be connected to form all or most of a process. Rather, the usual focus is on study and operation of an isolated single piece of equipment, such as a dryer, distillation column, or chemical reactor.

Equipment suppliers often have pilot plants intended to demonstrate the equipment they make. To do so well, they may have some supporting equipment, such as mixing tanks, conveyors, scales, and pumps. Users of such facilities usually must provide their own raw materials, labor, and packaging material (if used). The equipment manufacturers often provide technicians and commonly charge a fee for use of the facility. Such facilities may have some flexibility, but are often fairly spartan, as they may occupy a corner of a fabrication plant or shop and so may not provide a typical food processing environment. However, they are usually adequate for targeted testing, especially of equipment that is new to a potential customer.

Food companies can face daunting challenges in designing a good pilot plant, because of the wide variety of processes and products in which they are interested and the multiple and conflicting missions that may be assigned to the pilot plant. Usually, a food company pilot plant is the responsibility of a process development group (if there is one), the product development group, or the engineering group. Ideally, each of these groups should exist, and all should have an interest in the pilot plant.

Proper Scale
A perennial debate occurs over the desirable scale of an industrial pilot plant and how much it should resemble a production facility. On the one hand, small-scale equipment is easy to operate and clean, though it is not necessarily much less expensive than a larger unit. Some small-scale equipment can simulate multiple processes and thus may represent a cost savings over having multiple lines. However, for some operations, small-scale equipment may not exist. In other cases, such as cooking screw extrusion, scale-up from small to larger sizes may be unreliable.

One possible use of a pilot plant is manufacture of supplies of a new product for testing at various levels—central location, home use, and controlled markets. Larger and longer tests may require substantial quantities of product, which can severely tax the capabilities of what otherwise is properly seen as a research facility. The culture and skills of research technicians are quite different from those of manufacturing staff.

Some food firms address this issue with a specialized type of pilot plant, often called a semi-works, which has more of a manufacturing atmosphere. It is usually intended to be the temporary home of a given process until the fate of a new product or line is determined. A good semi-works is basically a large room with utilities and drains into which a small, integrated line can be installed and then later removed, to be replaced with the next project. Often, a separate packaging area is provided, which may not change much if a company’s products can use a common packaging approach.

Assuming that larger production runs are usually accomplished elsewhere—in a plant or semi-works—then the primary focus of a good industrial pilot plant is development. One consequence is that there will be a lot of waste, because it is normal in development to learn by trial and error and to experience frequent failure. This is one powerful reason to avoid doing development work at large scale in a manufacturing facility.

Challenges of Using a Production Plant
In many companies where a good pilot plant does not exist, it is common to do formulation work on a lab bench top and then go directly to a plant trial. This produces a number of consequences. First, research personnel must get to the plant site, which for some reason seems often to be remote. Second, the plant must free up a line, provide staff, and obtain any special materials, such as novel ingredients. It is not uncommon that the line needs to be modified in some way. For example, the packaging machines to which a line normally delivers products may not be appropriate, or an additional operation may need to be inserted.

Third, the plant will charge back to research the material and labor costs of one or more shifts. It is not uncommon for commercial food lines to produce thousands of pounds of product per hour and to require 6–10 people. Even for foods based on flour or corn, thousands of pounds costs multiple hundreds of dollars. With more-expensive ingredients, such as meat, the cost is obviously still higher. Some plants are so tightly scheduled that the only times available for tests are weekends on which labor costs may carry a premium. Working and traveling on weekends can also be stressful for the research people involved.

With all these costs and challenges, the costs for using plants for development are still understated because they ignore the lost-opportunity costs of not using the plant for commercial production. This is the difference between an accounting perspective and an economic perspective. So long as the company could sell profitably any product it can make—and today that is likely to be true—the true cost of conducting development in a plant is the lost profit on the sale of the product it did not make.

Where the cost of materials for thousands of pounds may be multiple hundreds of dollars, the value of thousands of pounds of product is certainly thousands of dollars—an order of magnitude larger. Baking and snack lines can produce 3,000–5,000 lb of product/hr. These often have values of $2–3/lb. A lost shift means lost income of $48,000–120,000. If a company has six developers and each does about 15 plant trials/year, the lost income could be $4.3–10.8 million/year. Now, some plant trials always need to be performed and there are costs associated with running a pilot plant, but even when these costs are recognized it is not hard to justify a substantial investment in a decent pilot plant.

What to Put in a Pilot Plant
Suppliers of small-scale equipment can help furnish a pilot plant. Two examples are Armfield Inc., Denison, Iowa (phone 712-263-5885, www.armfield.co.uk) and MicroThermics, Inc., Raleigh, NC (phone 919-878-8045, www.microthermics.com). Vendors of full-scale equipment also often offer smaller versions that are suitable for a pilot plant, such as kettles, heat exchangers, mixers, retorts, and ovens. Armfield offers a wide range of modular units, some of which are intended for demonstration or teaching, while others might be used for small-scale production. MicroThermics offers a full line of fluid-processing units and other equipment with a variety of heating devices and flow rates that are designed specifically to survive the potential abuse of research projects, such as unanticipated pressure or burnt-on deposits.

Small-scale equipment may seem expensive at first glance, but it is important to appreciate that the design engineering involved is perhaps more expensive than for a larger-capacity unit and the controls may be just as sophisticated. The convenience of modularity may also compensate for some of the cost.

A significant design issue besides scale is the degree of integration required. In many cases, sequential batch operation may be a reasonable approach. For example, most bread and cake products are still developed by batch mixing, rounding, proofing, forming (or depositing), and baking in deck or rotary ovens. At a commercial level, transfers are automatic and baking is in continuous conveyor ovens. Some fine-tuning may be required on translation from the lab or pilot plant to the full scale, but it usually goes smoothly.

At another extreme, a near-full-scale aseptic processing and packaging unit might be needed because there is such integration among product treatment, package material sterilization, and filling-space sterilization and protection. Some aspects of aseptic processing can be simulated with available small-scale equipment, primarily for product development, but some of the more important challenges are only seen on production equipment.

Worthwhile Investment
It requires a good understanding of a company’s core technologies to design a proper pilot plant, but the effort is almost always worth the investment because of the increased income, more-efficient research and development, and reduced stress on both R&D and plant staff.