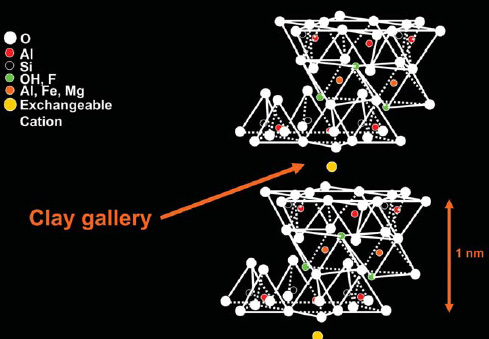 Nanotechnology is the control or manipulation of matter at the atomic, molecular, or macromolecular level, in which one of the components affects functional behavior. Fine particulates (100 nm or less) are incorporated into plastics to improve the properties over those of conventional counterparts.

Polymer nanocomposites are thermoplastic polymers which have nanoscale inclusions, 2–8% by weight. Above 8%, exfoliation becomes difficult, creating conversion problems during processing. Nanoscale inclusions consist of nanoclays, carbon nanoparticles, nanoscale metals and oxides, and polymeric resins. Nanocomposites are characterized by extremely high surface-to-volume ratio, as much as 750 m2/g, making them highly reactive in comparison to their macroscale counterparts and thus presenting fundamentally different properties.

Polymer-Clay Nanocomposites
Polymer-clay nanocomposites are plastics in which are homogenously dispersed a small percentage of nanoclay particles. The aspect ratio (diameter:thickness) of the exfoliated sheets is in excess of 100.

Nanoclays exist as agglomerated bundles in their natural state, composed of thousands of platelets bound by Van der Waals forces that arise from the molecular polarization of dipoles. In nanoclay technology, the silicates are layered to a thickness of approximately one nanometer, forming stacks with interlayer gaps, also known as the gallery. The interlayers contain charged ions to facilitate penetration of the gallery space through exfoliation or intercalation of the polymer, wherein dispersed clay silicate is layered throughout the polymer.

Dispersion in the clay layers is affected by the hydrophilicity/hydrophobicity of the polymer, leading to the intercalated or exfoliated structure. Surfactants may be added to compatibilize the hydrophilic nanolayers with hydrophobic polymers.

In intercalated types, polymer chains are present between the alternating silicate layers. The chains assemble inside the well-ordered galleries of the layered host crystals sandwiched between the silicate layers. In exfoliated, or delaminated forms, the clay platelets are separated into random arrangements and are more fully dispersed in the polymer matrix, because the silicate layers are not close enough to interact with adjacent layers in their enlarged gallery spacing. The nanoclay platelets at the outermost region cleave off, exposing more platelets for separation. This dispersed form is ideal because it obtains the best gas barrier properties, but it is difficult to achieve during synthesis and/or processing, and so compatibilization is essential.

Characteristics
Nanocomposites have three main components, with a portion of each being necessary for a synergistic effect at the polymer–nanoparticle interface: the matrix, reinforcement, and the interfacial regions. The matrix supports the reinforcement and imparts physical and mechanical properties to enhance the matrix.

Silicate layers (reinforcement) within the polymer matrix may be naturally occurring (e.g., montmorillonite), or synthetic. The interfacial region “communicates” between the matrix and reinforcement with behavior that controls the properties. The filler has different properties than the matrix due to its proximity to the reinforcement surface.

Montmorillonite is the current clay mineral of choice because it is available and inexpensive, and can be used in conjunction with high- and low-density polyethylene (PE, LDPE, HDPE), nylon, polyvinylidene chloride (PVdC), and biopolymers.

Clays can be added as coatings on flexible or paperboard packaging or added in aqueous solutions. Polymer-clay nanocomposites become hydrophobic due to ionic exchange of the sodium interlayer cation with an onium cation from the polymer matrix.

Processing Methods
Polymer nanocomposites can be prepared by solution, or template synthesis; solvent, or mesophase-mediated processing; interlamellar (in-situ) polymerization; or melt processing. The thermal behavior and crystallization of montmorillonite nanocomposite is influenced more by the type of dispersion than by the clay content. 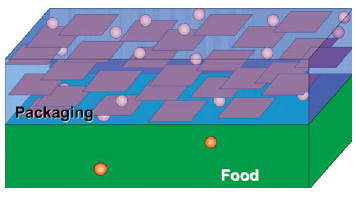 • In the solution method, the polymer is dissolved in a solvent and the polymer molecules move between silicate layers of the added filler. The solvent is evaporated and the layers obtain an intercalated or exfoliated form.

• In mesophase-mediated processing, a solvent is employed in a double-phase reaction medium. In the first phase, silicate layers are suspended in the aqueous phase. In the second phase, polymerization of a monomer occurs within the suspension.

• In interlamellar polymerization, the layered silicates swell via absorption of a liquid monomer which then migrates into the galleries of layered silicates. Polymerization initiated by heat, radiation, or diffusion of an initiator that occurs between the intercalated sheets.

• In melt processing, polymer chains diffuse into the galleries between the silicate layers. Clay fillers intercalate in the molten state of the polymer, forming the nanocomposite. Clays are mixed at temperatures that exceed the polymer’s softening point, whereby the polymer melt intercalates. Melt processing is preferred because it does not require a solvent.

Critical to any of the preparation methods is the engineering of the polymer–nanoparticle interface. Also, compatibilizers (surfactants) are commonly used to facilitate the interface process. They include small molecules ionically associated with the nanoparticle surface, e.g., layered silicates or chemically bound small molecules. Hydrophilic layered silicates can be rendered more organophilic as the hydrated cations of the interlayer are exchanged with cationic surfactants. Compatibilizers maximize the enhancement properties of layered silicates dispersed in a polymer matrix.

A surface treatment is added to the clay because some clays are hydrophilic and must be chemically modified with compatibilizers to make the surface more receptive to dispersion with mostly hydrophobic polymers. Once treated, the clays are dispersed into the polymer matrix by polymerization or melt compounding.

Properties
Polymer-layered silicate nanocomposites share one common feature, a layer of interphase polymer near the inorganic surface. The composite properties of the interphase layer are more than the sum of the bulk properties. The behavior of the nanocomposite depends on the size of the clay platelets. The thinner and smaller the platelets, the greater the available surface area to interact with the polymer matrix.

• Barrier Properties. In nylon-6 nanocomposites, the increase in degree and type of crystallinity, together with the tortuous path development due to exfoliated dispersion, are primary reasons for improvement in gas barrier properties.

The physical and chemical properties of nanocomposites are enhanced, in part, by the attractive forces between the molecule’s interchain forces, which are stronger than those of conventional molecules, and exhibit higher tensile strength and melting points. Affective polymeric properties include the degree of polymerization, or number of structural units in a polymer chain; molecular mass; distribution of the polymer fraction; crystallinity; glass transition temperature; and melting point. Thermal conductivity is also enhanced to maintain processability during extrusion and molding.

• Clarity. Nanoclay polymers do not interfere with clarity or transparency of packaging materials because their nanometer length scale minimizes the light scattering.

Barrier Plastics
Nycoa, Bayer, Honeywell, and Nanocor have combined silicates in nylon 6, which is fluid and easily penetrates small spaces between layered silicates. Once mixed, the layered silicate stacks are uniformly distributed throughout the polyamide. When extruded, such as a film, platelets orient themselves parallel to the surface, allowing for improved barrier properties. Nylon 6 films and bottles exhibit enhanced properties, including oxygen, carbon dioxide, and water vapor barrier, UV radiation, clarity, stiffness, and thermal stability.

Nanocor melt-compounds its nanoclay additives with MXD6 nylon to be used in films and polyester (PET) bottles. Nanocor’s Imperm is a MXD6 nylon/clay nanocomposite plastic used as an oxygen barrier in beer and carbonated beverage bottles and in packaging of processed cheese and meats, confections, and cereals, and in extrusion-coating of paperboard packaging for juice and dairy products. Loading 5% Imperm in PET beer bottles is claimed to have a shelf life of six months and less than 10% carbon dioxide loss, at a 10% cost premium over that of PET alone. MXD6 nylon, when combined with nanoclay, exhibits barrier properties five times those of water-vapor sensitive ethylene vinyl alcohol (EVOH); halves water vapor transmission; and exhibits low aroma permeation, a critical factor in flavor scalping. Imperm allows the reduced oxygen permeation over a broader relative humidity range than do nylon MXD6 and EVOH.

Bayer offers a hybrid system of cast-film nylon 6 nanocomposites to be used where EVOH is too expensive and conventional polyamides are too permeable, such as a plastic coating for paperboard juice containers.

Issues
Interest groups are trying to assess whether nanostructures or their manipulation change the toxicological profile. Concerns have arisen regarding the effects of nano-sized particles on the human body and the environment. The high surface-to-volume ratio of nanomaterials makes them more reactive and potentially more toxic. Because they are more reactive, they may interact with other materials during disposal and recycling. Others fear that nanomaterials may cause new allergens, new toxic strains, and increased rates of nanoparticle absorption by the environment.

The dispersion of nanoclay into the polymer matrix requires a custom solution for each polymer, thus requiring intensive research and development capital, meaning that the costs might be more than for plastic macromolecules.

Nanotechnologies will certainly influence food packaging in the coming decades. Caroline Morris’s review clearly maps this challenging terrain. Request a copy from me by e-mail.