Food and beverage plants can produce large quantities of relatively strong wastewater. Water is used in recipes and for washing raw materials, transporting materials in flumes, cleaning equipment, raising steam, and cooling. Compared to sanitary wastewater generated by homes and apartments, industrial wastewater in general, and food wastewater in particular, is typically more concentrated in dissolved and suspended solids and more variable in flow and pH. Food wastewater may also be high in fats, oil, and grease (FOG), which are of special concern because they can solidify and choke sewer lines.

Wastewater is traditionally characterized by biological oxygen demand (BOD), which is measured in the laboratory by culturing a sample with a population of microorganisms for five days. The reduction of oxygen in streams due to consumption of organic matter can lead to fish kills. Sanitary wastes often have BOD values of about 200 mg/L (same as parts per million), while food wastes can exceed 1,000 mg/L.

Chemical oxygen demand (COD) is an alternative measure that is faster to perform and usually gives a higher value because it includes some matter that may resist biological oxidation. Total suspended solids (TSS) is measured by filtration. Values of pH in food wastes can range widely because both acids and bases are often used in cleaning.

Wastewater cannot be discharged directly to a stream unless it has BOD, TSS, FOG, and pH values essentially the same as those of the stream or even lower. Thus, something must be done to remove the organic matter and otherwise purify the water.

First Reduce and Segregate
Most food plants use more water than they must and could dramatically reduce their use if they tried. Doing so should be the first step in addressing a wastewater issue. Start by identifying all points of water use. It can be a surprise to discover, for instance, that there are small but steady streams of water flowing on filling machines to wash away spills. Perhaps these can be converted to intermittent sprays or mists or even turned off entirely. An ice cream plant saved about 12,000 gal/day by using a different filler with less water consumption.

Too often in food plants, hoses are left running because they do not have a shutoff valve on the end. These same hoses are used to chase spills to a drain. Hoses should have “dead man” valves so that they only run when attended. Spills should be cleaned with scoops or shovels when possible. Most plants could probably use fewer hoses, but taking them out can be unpopular.

Water used for cooling is rarely contaminated but may be mixed with other wastes, adding to discharge volumes. It often is economical to install a cooling tower and recirculate cooling water. Finally, it may be effective to reuse water before finally discharging it. In one case, a clam processor used fresh water in several washing steps, including on freshly caught, muddy clams in the shell. By modifying the flow so fresh water was used on the final clam pieces and then the same water in countercurrent flow, volume was reduced by a factor of three.

Municipal Treatment
If the community in which a plant is located has sufficient treatment capacity, the most convenient approach is to discharge to that facility. There almost always is a fee for this service, and there may be restrictions on waste volume and strength. Water conservation, as mentioned, should always be practiced, but may be essential where treatment capacity is limited. Some pretreatment may also be needed, especially for FOG.

Process wastewater and sanitary wastewater should flow through separate lines until outside the plant, where there should be an air break or catch basin, which can also function as a grease trap. This prevents contamination of the process area by back flow in the event of a blockage or flood. Floating grease is periodically removed and disposed of in landfill or by other means.

Land Application
When a food plant is sufficiently isolated and has adequate land, it may safely dispose of wastewater by spraying it on land planted in grass or other cover crop. Wind, temperature, and soil permeability all affect how much land is required and how well the system works. Seasonal canneries often used land application because they were frequently in rural areas and operated mostly during warm weather. As housing encroaches on once isolated plants, there can be complaints about odor and spray carryover.

Conventional Treatment
Conventional wastewater treatment involves applying the natural processes of physical separation and oxidation in controlled circumstances to produce an effluent that is acceptable for discharge to the environment. There are many variations, but a common sequence is primary settling, in which heavy and light suspended matter is separated by gravity; followed by secondary aeration, in which BOD is consumed by microorganisms supplied with air, typically by strong agitation; followed by clarification, in which the microorganisms are separated by gravity to produce sludge and clear effluent. This process is called activated sludge because the sludge contains the microbes that are doing most of the oxidation.

Some processes use tertiary treatment, in which the effluent may be polished by powdered or activated carbon; filtered through sand or membranes; chlorinated or ozonated; or otherwise further treated. 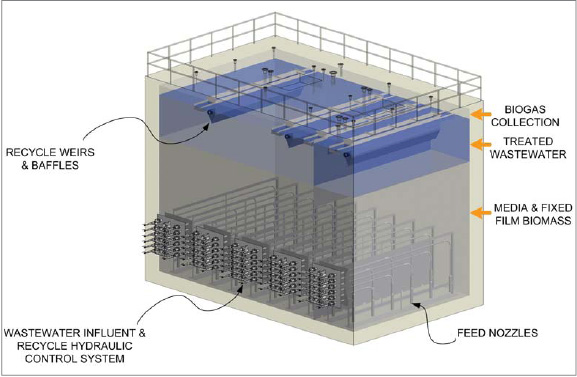 Disposal of sludge is a major issue because the microbes are highly hydrated and hard to concentrate—sludge can be only 1% solids. Some sludge is recycled to keep the process operating, but some must be wasted. It can be dried, spread on land, or digested using anaerobic treatment, in which air is excluded. Instead of oxidizing organic matter to carbon dioxide and water, as in aerobic treatment, anaerobic digestion produces methane and carbon dioxide. The methane can be burned as an energy source to fuel a boiler or dryer.

Proprietary Treatment Processes
Conventional wastewater treatment, as briefly described here, is rarely a good choice for a food plant that must pretreat or fully treat its wastewater, because it requires a large amount of space, takes skill and training to operate, and generates large volumes of bulky sludge. Some better choices are proprietary treatment processes that are more compact and often produce useful by-products. Here are a few representative examples:

• Physical Separation. Suspended solids also contribute to BOD and FOG, so physical removal can be an effective treatment option. However, conventional filtration may be difficult because the typical organic material is hydrated, has small particle size, and may plug many filter media. One approach is to dissolve air in the waste under pressure or disperse fine bubbles. The bubbles of released dissolved air attract particles and float to the surface, where the scum is skimmed. Clean Water Technology, Inc., Goleta, Calif. (phone 805-685- 9100, www.cleanwatertech.com), offers the GEM system, which the company claims can treat 20–75 gal/min in a small space and produce significant reductions, especially in FOG.

• Aerobic Treatment. ADI Systems Inc., Salem, N.H. (www.adisystemsinc.com), offers a wide variety of wastewater treatment systems, including its proprietary Membrane Biological Reactor (MBR) based on the Kubota flat-plate membrane concept. The membranes retain the microorganisms at a much higher concentration than is possible in the typical aeration reactor/clarifier combination. This is expressed as the mixed liquor suspended solids value (MLSS) and is 15,000 mg/L in the ADI-MBR, compared to 2,000–5,000 in conventional activated sludge systems.

The membranes are placed close together in a tank above an air diffuser. Bubbles provide the air and help keep the membrane surface clear. The membranes are porous enough that effluent moves through by gravity or is assisted by a suction pump. About every 10 min, liquid flow is interrupted to allow the air bubbles to scour the membrane surface. About twice a year, the membranes are cleaned chemically with sodium hypochlorite. Membranes last 5–8 years if maintained well. According to Al Cocci, Vice President Marketing and Sales (phone 603-893-2134), there are about 1,000 installations worldwide, more than 50% for foods and beverages.

Within the system, the high density of microorganisms (20,000–80,000 mg/L) allows for ultra-high treatment rates and efficiencies. A patented hydraulic control system regulates the flow of the wastewater through the reactor bed to optimize pollutant removal rates. Biogas, mostly methane, is recovered from the top of the chamber. With rising fuel costs, the biogas can have significant value and is used by Ecovation clients in cogeneration and to replace natural gas in boilers.

Ecovation has a mobile MFT pilot plant on a trailer that can treat up to 9,000 gal/day to demonstrate and evaluate the process. The company has several installations in the food and beverage industry.