The fundamental key to optimizing a manufacturing line is understanding what process steps or unit operations are the pacesetters or bottlenecks. This is not always obvious. Food process lines are often a combination of batch and continuous operations. For example, baking usually begins with batch mixing of dough or batter. It may be followed by batch or continuous proofing (for yeast-raised products), continuous forming (rounding in the case of breads, cutting or molding for cookies and crackers), and then continuous or batch baking, cooling, and packaging. 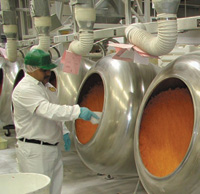 Typically, a baking-line speed is set by the oven because it is the largest and most expensive unit in the line. It is good practice to have packaging capacity that is greater than the oven capacity for several reasons. It is difficult to manage loaves of bread or piles of cookies and crackers without damaging many, so it is a challenge to provide surge capability.

Further, packaging lines are prone to frequent stops to allow for changes in packaging film or to correct jams. If there were no excess capacity, then product from the cooler would pile up when a packaging machine was stopped. For more durable products, such as breakfast cereal or pet food, providing some surge may be practical. Sizing the surge or determining the required excess packaging capacity requires collecting statistics on downtime—frequency and duration.

Mixing and forming operations should be sized to provide a nearly continuous supply of formed products to the oven because every square inch of oven belt represents potential production. Sometimes, baked products are handled on trays or in pans. It is important that each potential spot be filled if the objective is to maximize production. It often happens that slowing a depositor or cutter to reduce jams or missed pockets increases net production by more thoroughly filling trays and reducing malformed or otherwise-defective products such as occur when two dough balls contact one another. It may be counterintuitive, but running at the “right” speed is usually better than running as fast as possible.

Batch Operations
Batch operations have loading and unloading times in addition to the time taken by the main function—mixing, for instance. There may also be a need for cleaning between batches if a formula changes. The total cycle time dictates the net production. Providing surge before and after a mixer can increase production rate by spreading various functions among different units. Instead of the mixer being idle while it is loaded, ingredients are loaded into a feed bin while the mixer is turning for an earlier batch. Likewise, the mixer can be dumped to a surge bin when it is finished, and then the next step in the process is fed from the surge bin rather than the mixer. Bins are generally less expensive than mixers, so the net effect can be increased capacity with less investment than multiple mixers would require.

For solids, it is best to use gravity flow, which requires a relatively tall arrangement of equipment. Dough can be elevated with conveyors, so bakery mixers are often located at grade, but it is also common to have them on a second floor, above the ovens. New plants are rarely built with multiple floors because it is less expensive not to have them and it is thought that communication among operators is easier when they are not separated by floors. Multiple floors also require elevators, which can be unreliable and are expensive. Nonetheless, multiple floors can afford some advantages in line layout and material flow.

In ice cream manufacturing, for example, there may be miles of stainless steel tubing to deliver ice cream mix to multiple freezers and fillers. All of those lines need to be cleaned, almost always by cleaning in place (CIP), which means the piping system is nearly duplicated. Having the ice cream mixing and pasteurization operations on a second floor can greatly reduce the amount and complexity of the piping. An additional benefit may be better control over air entrainment, which is characteristic of premium and superpremium ice creams.

Separation of Functions
Separating the functions of a line in time or space may seem counterintuitive as compared with more tightly integrating functions, but it can be effective. Where products lend themselves to storage, introducing surge capacity frees an inherently continuous operation from the vagaries of packaging or another operation with different reliability characteristics. For example, a pet food or breakfast cereal extruder takes a while to start operations, but once it is running, it is fairly stable. When it does stop, perhaps because of a blocked die plate, it may be down for a long time. It is impractical to provide surge capacity against extruder interruptions, but because packaging interruptions are much briefer, surge of a few minutes is sufficient in most cases.

Surge bins are maintained either full or empty, depending on what function they are protecting. In the extruder example, the bin should normally be empty so there is room for product when packaging is not taking material away. The surge bin ahead of an oven should normally be full so the oven is not starved when a mixer is not ready to empty. It is common in bakeries for the mixer operators to come to work earlier than other employees so they can build up an inventory of dough or batter. This also allows for fermentation or proofing time.

Some products or intermediates benefit from floor time or aging. Dough can relax, cloudy juices can settle before filtration, and ground meat for sausage can equilibrate salt and seasonings. It is common in some industries to spread production over several days. For example, it can take nearly a week to cure the centers and then create the sugar shell of jelly beans and other panned candies.

Maximizing Performance
Food processing is not very labor-intensive, with the exception of meat packing and a few other examples. Nonetheless, because labor is a visible cost, efforts are often made to reduce staffing through mechanization and automation. Mechanization of tasks can improve ergonomics and safety by replacing human power with machines, which may eliminate repetitive motion injuries and back sprains from heavy lifting. Robots can be used to pick items from a belt and place them in packages—a task often performed by hand. Scissor lifts can elevate pallets of bagged ingredients so a worker only moves bags horizontally when dumping into a mixer or bag dump station. Mechanization requires capital investment and ongoing maintenance and may or may not replace labor. The real return may be in improved worker health and in greater product consistency.

People are valuable components of a manufacturing system because they can provide nearly continuous, 100% inspection, if they are well trained. People are also more flexible than machines and can do multiple tasks. They can apply judgment, whereas a machine is mindless. Many segments of food processing still have an artisanal character, despite the efforts of engineers and scientists to eliminate it. Bakers, cheese makers, and panning operators can sense quality in their products in ways that defy instrumentation. It is wise to respect and encourage such skill. We are, after all, making food, not plastic.

Extreme efforts to reduce labor have occasionally backfired. In one instance, the staff of a tuna-processing plant was reduced by half without reducing capacity. Tuna comes in many sizes, and the key to profitability is sorting the reddish meat used for pet foods from lighter meat used for human food, usually with higher value. With reduced staff, yield of the reddish meat increased, so even though labor costs were less, profit also decreased. When staff was restored, profits went up because more of the valuable white meat was recovered.

Computer control of equipment and computer integrated manufacturing (CIM) help people do a better job by reducing the opportunity for human error in recording and transferring data. Ideally, data should be entered only once and should be obtained instrumentally wherever possible. Counts, downtime, motor speeds, temperatures, pressures, and flow rates can all be obtained automatically and converted effortlessly to meaningful information. Instruments, controls, computers, and servers now can communicate seamlessly—wirelessly and over networks. Data only becomes information when it is translated into dollars and cents and is delivered accurately to those who need to make decisions. Maintaining a reliable control and information system requires skills that were not previously expected of food plant workers.

Specialized software can help, according to Mike Neal, CEO of SignalDemand, San Francisco, Calif., (phone 415-356-6000). The company’s programs collect commodity cost data, market prices, and contracting alternatives to assess risks and opportunities and to help managers set pricing strategies. The concept resembles investment portfolio management, seeing products and contract alternatives as options with different risks and profit potential. Everyone from line worker to CEO has a stake in the results and a chance to influence them.