Building and maintaining strong bones is critical during all stages of life. Prevention of osteoporosis later in life starts during childhood and adolescence when bone development occurs. 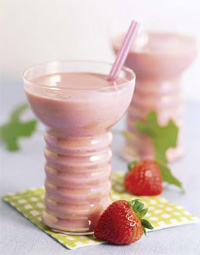 According to the National Osteoporosis Foundation (NOF), Washington, D.C. (phone 800-231-4222, www.nof.org), osteoporosis is a major public health threat for an estimated 44 million Americans, or 55% of those age 50 and older. In the United States, an estimated 10 million individuals already have the disease, and almost 34 million more have low bone mass, by NOF’s estimate, placing them at increased risk for osteoporosis.

While calcium and vitamin D are key nutrients in developing and maintaining strong bones, other healthy ingredients—from phosphorus and magnesium to inulin and soy isoflavones—also play roles in optimizing bone health.

Calcium and Vitamin D
Calcium is required for continued bone growth and the ongoing process of bone remodeling. Bones and teeth contain about 99% calcium. Vitamin D aids in the body’s absorption of calcium, helping to form and maintain strong bones. Hitz et al. (2007) showed that supplementation with calcium and vitamin D reduced bone turnover and significantly increased bone mineral density in subjects younger than 70 years old and decreased bone loss in older subjects. The researchers randomly assigned 122 subjects with a fracture of the hip or upper extremity to receive 3,000 mg of calcium carbonate and 1,400 IU of vitamin D-3 (cholecalciferol) or a placebo (200 IU of cholecalciferol/day) for one year.

Phosphorus
Phosphorus is the second-most-abundant mineral in the human body. (Calcium is the most abundant.) Approximately 80% of phosphorus is present in the skeleton, while the other 20% is active metabolically.

“What makes bones and teeth rigid is calcium hydroxyapatite, a calcium-phosphate mineral in the Ca:P ratio of 1.67:1,” explained Myers. “It is critical that sufficient levels of phosphorus are maintained throughout life to ensure proper bone development and healing.” For the treatment of osteoporosis, the proper balance of both phosphorus and calcium is required to maintain sufficient bone density, she added.

According to Myers, research conducted by Robert Heaney of Creighton University Medical Center, Omaha, Neb., a leading researcher in the U.S. involved in the study of the relationship of various nutrients (e.g., phosphorus) to bone health, has consistently demonstrated the strong connection between calcium and phosphorus in good bone health and in the prevention and treatment of osteoporosis.

Magnesium
Magnesium is a cofactor in more than 300 enzymatic reactions the body and is necessary for formation of healthy bones and teeth. Carpenter et al. (2007) showed that magnesium supplementation in periadolescent girls enhanced bone mineral density.

They recruited healthy 8-to-14-year-old Caucasian girls from community pediatricians’ offices and instructed them to keep dietary diaries. They then analyzed the diaries from more than 120 volunteers, and those with dietary magnesium intakes of less than 220 mg/day were invited to participate in the study.

For 12 months, the subjects received either 300 mg of elemental magnesium/day in two divided doses or a placebo. Subjects who took the magnesium had significantly increased accrual in integrated hip bone mineral content (BMC). Trends for a positive magnesium effect were evident in the subjects experiencing pre- and early puberty and mid-late puberty. The researchers concluded that magnesium oxide capsules are safe and well-tolerated and had a positive effect on integrated hip BMC.

Vitamin K
Cranenburg et al. (2007) explained that vitamin K plays a role in activating proteins responsible for calcium utilization in the bones. It is required for the activation of osteocalcin, a protein necessary to transport calcium from the blood to form healthy bone matrix.

Knapen et al. (2007) showed that vitamin K-2 supplementation improved hip bone geometry and bone strength indices in postmenopausal women. The researchers gave 325 postmenopausal women either 45 mg of vitamin K-2 (MK-4, menatetrenone) per day or a placebo for 3 years. The results showed that vitamin K-2 helped maintain bone strength at the site of the femoral neck (the most common location for fracture) in postmenopausal women by improving bone mineral content and femoral neck width. The study was conducted using menatetrenone, a synthetic vitamin K-2 (MK-4). Since MK-4 has a very short biological half-life time (1–2 hr), it needed to be administered 3 times/day in a dose of 15 mg/serving, according to the researchers.

PL Thomas & Co. Inc., Morristown, N.J. (phone 973-984-0900, www.plthomas.com), provides Mena Q7, a natural vitamin K-2 as an extract of natto, a fermented soy food from Japan. Natto is particularly rich in the highly bioavailable form of vitamin K-2 called menaquinone-7 (MK-7). According to the company, it has a longer plasma half-life time and greater bioactivity throughout the whole body than any form of vitamin K. As a result, it is believed that just 45 mcg of MK-7/day will provide optimal vitamin K status.

Inulin
Inulin, a prebiotic fiber extracted from chicory root, has been shown to boost calcium absorption. According to Cargill Health & Food Technologies, Minneapolis, Minn. (phone 866-456-8872, www.cargillhft.com), a person should consume at least 8 g of inulin/day for increased calcium absorption. The company offers Oliggo-Fiber® inulin, a line of oligosaccharide products that belong to the group of nondigestible carbohydrates called fructans.

Holloway et al. (2007) suggested that inulin enriched with oligofructose can improve calcium and magnesium absorption and impact markers of bone turnover in postmenopausal women. They gave 15 postmenopausal women 10 g/day of Beneo™ Synergy1 or a placebo for 6 weeks using a double-blind, placebo-controlled, cross-over design. In the subjects who took the inulin, fractional absorption of calcium and magnesium increased, bone resorption was greater than baseline at 6 weeks of active treatment, and bone formation (by serum osteocalcin) showed an upward trend at 3 weeks and an increase following 6 weeks of treatment. Orafti Active Food Ingredients, Malvern, Pa. (phone 610-889-9828, www.orafti.com), produces Beneo Synergy1.

Fructooligosaccharides
Short-chain fructooligosaccharides (scFOS) are natural prebiotic fibers derived from beet or cane sugar. When eaten, scFOS passes through most of the digestive tract until they reach the large intestine, where they feed probiotic bacteria. NutraFlora® prebiotic fiber, produced by GTC Nutrition, Golden, Colo. (phone 303-216-2489, www.gtcnutrition.com), is said to increase calcium absorption by making the intestinal environment more acidic, keeping minerals in a digestible form longer. It also increases a calcium binding protein, thus allowing more calcium to pass through the intestinal wall. Additionally, it amplifies the benefits of isoflavones by enhancing their absorption.

According to the company, recent studies reveal that about 3 g of NutraFlora/day may significantly and immediately improve calcium and magnesium absorption in human subjects, which may help to reduce the risk of osteoporosis.