December 1, 2009
Share +
New sample preparation technologies are being developed to enable more rapid, accurate, efficient, versatile, and standardized extraction and purification of biomolecules for subsequent analysis. Two relatively recent techniques for extraction and purification of DNA, RNA, nucleic acids, proteins, lipids, and other biomolecules from a variety of types of samples have been developed, and instruments using these techniques are in various stages of being commercialized. 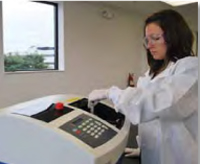 Pressure Cycling Technology
Pressure BioSciences Inc. (www.pressurebiosciences.com) has developed a process it calls pressure cycling technology (PCT) and an instrument utilizing it called a Barocycler®. Its purpose is to extract biomolecules from human, microbial, and plant tissues so that they can be subsequently analyzed by mass spectrometry, electrophoresis, polymerase chain reaction (PCR), and other downstream analytical techniques.

Pressure BioSciences Inc. () has developed a process it calls pressure cycling technology (PCT) and an instrument utilizing it called a ®. Its purpose is to extract biomolecules from human, microbial, and plant tissues so that they can be subsequently analyzed by mass spectrometry, electrophoresis, polymerase chain reaction (PCR), and other downstream analytical techniques.

According to Senior Vice President Edmund Ting ([email protected]), the instrument cycles hydrostatic pressure between ambient and ultra-high levels (35,000 psi or higher) to safely and efficiently release biomolecules from samples within minutes, allowing for more rapid and accurate downstream testing.

Most current extraction methods rely principally on high-energy methods such as high-shear homogenization, bead beating,and sonication to free biomolecules from sample material, he said. In contrast, high pressure is a much less energetic method (nonthermal) that is combined with selected chemistry to improve the extraction of molecules, usually with less damage than conventional methods. PCT is also being used to accelerate enzymatic proteolysis for sample preparation prior to mass spectrometry.

The company’s PCT Sample Preparation System includes the Barocycler instrument, and single-use sample-processing containers called PULSE® Tubes and MicroTubes. They hold as little as 50 μL or as much as 1.5 mL and are specially made to withstand high pressures. The Tubes accept both solid and liquid samples, while the MicroTubes take primarily liquid samples. The user places the sample to be analyzed into a tube, submerges the tube in water in the reaction chamber of the instrument, and turns the Barocycler on, which subjects the sample to alternating cycles of ambient and high hydrostatic pressure. The changes in pressure disrupt the cells and tissues in the sample, releasing their contents for analysis. PCT can be used in combination with chemistry, temperature, and mechanical disruption to optimize the release of the biomolecules. The self-contained sample processing system eliminates cross-contamination, increases user safety, and allows consistent processing for method standardization across laboratories.

The company offers several kits that work in concert with pressure to enrich for certain biomolecules, including proteins. Once proteins are released from the cell they can be further prepared for study using pressure in the presence of enzymes to digest them for downstream analysis by mass spectrometry. This method of preparation takes less than 1 hr, whereas other methods traditionally take as long as 12–16 hr.

Ting feels that PCT has the potential for broad applications in a number of established and emerging life sciences areas, including sample preparation for genomic, proteomic, and small molecule studies; pathogen inactivation; protein purification; control of enzymatic reactions; and immunodiagnostics.

The Barocycler instruments are currently being used in universities, government laboratories, and pharmaceutical companies. For example, U.S. Dept. of Agriculture researchers are using the PCT system to extract DNA from wheat-infecting fungi in soil and from plant samples infected with Huanglongbing, a citrus crop disease that has the potential to devastate citrus groves worldwide. In addition, Food and Drug Administration researchers are using the PCT system in research on pathogens, digestion of proteins for biomarker discovery, extraction of allergens, and other projects.

Researchers in FDA’s Office of Regulatory Science at the Center for Food Safety and Applied Nutrition (CFSAN) have found PCT to be more efficient and easier to use than other extraction methods. They are using it as a replacement for standard extraction methods such as sonication and bead beating, since the yield of protein is considerably higher and the method is more reproducible.

Their main focus at present is using the instrument to enhance the extraction of protein to identify and differentiate bacteria and to help microbiologists identify new virulence factors in emerging strains. After extraction, the researchers pass the expressed proteins through a liquid chromatograph to separate them and through a mass spectrometer to determine the molecular weight. The LC/MS gives a pattern or profile of the proteins that are present, and single proteins can be further investigated by other bioanalytical mass spectrometry methods.

Other applications of the technology being considered by researchers at CFSAN include the extraction of allergens from complex matrices, as in the case of peanuts in chocolate. Another area of interest is extraction of seafood toxins from marine organisms, where the standard procedure—boiling—for extraction of toxins from shellfish such as mussels and oysters is fairly complicated.

Ric Schumacher ([email protected]), Founder and CEO of Pressure BioSciences Inc., said that the company has focused initially on the life sciences, drug development, and forensics areas, but he believes that there is great potential in the food applications area. Although the technology is not yet being applied to food analysis per se, he said, it is being applied in work on pathogens that affect fruits, vegetables, grains, seeds, and feed. He added that it is also helping scientists conducting research on diabetes, heart disease, stroke, and cancer. The technology works in breaking up the outer part of a cell, especially if it is high in lipids, such as cells involved in these diseases, for which sample preparation is difficult. He believes that PCT is versatile enough to also be effective in breaking open difficult cells and tissues in food science and microbiology.

Electrophoresis
Boreal Genomics (www.borealgenomics.com) has developed an electrophoresis-based nucleic acid purification technology it calls Synchronous Coefficient of Drag Alteration (SCODA). It involves use of alternating electric fields to move charged molecules such as nucleic acids through an agarose gel, selectively concentrating them and separating them from contaminants.

Boreal Genomics () has developed an electrophoresis-based nucleic acid purification technology it calls Synchronous Coefficient of Drag Alteration (SCODA). It involves use of alternating electric fields to move charged molecules such as nucleic acids through an agarose gel, selectively concentrating them and separating them from contaminants.

The company was founded as a spinoff from work conducted by Andre Marziali ([email protected]) and colleagues at the University of British Columbia. Marziali, Associate Professor of Physics and Engineering Physics Director at the university, also serves as the company’s president. He and his colleagues found that nucleic acids behave differently from other biomolecules in response to alternating fields, allowing them to focus DNA in the center of an agarose gel, while washing out most contaminants. They determined that the technology was particularly effective in removing contaminants that other DNA extraction methods have trouble with. They described their technique in the August 10, 2009, issue of Proceedings of the National Academy of Sciences.

Concentrating nucleic acids by electrophoresis has two benefits over other methods, he said: First, the yields from dilute samples are much greater than those that column- or bead-based methods provide, and second, the technology has the ability to reject contaminant molecules, such as PCR inhibitors, more effectively than competing technologies, in some cases 100- to 1,000-fold more effectively. Purified products from the Boreal instrument are ready for real-time PCR detection of specific pathogen sequences, or for complete DNA sequencing.

Marziali said that the company is currently distributing a prototype instrument, SCODA 1.4, and readying a higher-performance instrument, the Aurora, for release next summer. Aurora may also open up new applications, such as in food safety testing, where current testing methods are expensive and slow. Culture methods, he said, take 8–12 hr of pathogen incubation to allow direct PCR detection. Aurora uses disposable gel cartridges and provides purified DNA from milliliter volumes in 5–10 min. It is a single-channel instrument, handling one sample at a time. Marziali said that the technology has been proven and the next challenge is primarily an engineering one: to make a multichannel instrument.

Flavor Extraction
Symrise (www.symrise.com), a flavor and fragrance company based in Holzminden, Germany, has introduced SymStixx™, a glass probe that allows researchers to extract flavors from food samples for further analysis. The probe, a glass rod a few centimeters long and a few millimeters in diameter, is made of glass with a specialized polymer coating.

Symrise (), a flavor and fragrance company based in Holzminden, Germany, has introduced ™, a glass probe that allows researchers to extract flavors from food samples for further analysis. The probe, a glass rod a few centimeters long and a few millimeters in diameter, is made of glass with a specialized polymer coating.

Berthold Weber, Director of Analytical Services, said that the composition of the polymer was optimized by broad testing and is used forall types of samples. It allows the user to obtain a comprehensive profile of the sample’s flavor.

The user places the probe in contact with the sample to be analyzed, while the sample is being stirred. The user then cleans the probe with a tissue and  nalyzes the sample with a conventional thermal desorption system connected to a gas chromatographmass spectrometer (TDS/GC/MS) system. The flavorings are then identified by comparison to compounds in a database and are profiled by special software.

The technique is similar to other methods such as stir-bar sorptive extraction or solid-phase microextraction but has advantages over them, Weber said. The focus of those other techniques is primarily nonpolar compounds, whereas SymStixx is also able to extract polar compounds. In addition, he said, the other techniques can’t be used in many complex foods containing large quantities of fats, sugars, proteins, or water without time-consuming workup. It is particularly useful for profiling meat flavorings and natural flavorings such as vanilla and mint, he said.

Differentiating Live and Dead Cells
Scientists at the University of Missouri have developed a method for differentiating live Escherichia coli O157:H7 cells from dead cells, to improve analysis by real-time polymerase chain reaction. PCR can’t differentiate between live cells and dead cells, so the presence of dead cells may result in false positives, according to Azlin Mustapha ([email protected]), Associate Professor in the Dept. of Food Science.

Mustapha and her coworkers Luxin Wang and Yong Listained samples with ethidium bromide monoazide. The dye can’t penetrate live cells, she said, but it can enter dead cells, where it binds to DNA molecules, making them insoluble and therefore “invisible” to PCR tests.

The researchers have successfully tested the technique on ground beef, chicken, and eggs, Mustapha said. After an enrichment step of 12 hr, the actual test takes about 3 hr to complete, with a detection limit of 10 cfu of live E. coli O157:H7 cells per gram of ground beef of different fat contents. This is an improvement in testing time over culture methods, which may require up to 2 days for results, she said, and it provides selectivity of live target cells. The results on ground beef appeared in the Journal of Applied Microbiology in October 2009.