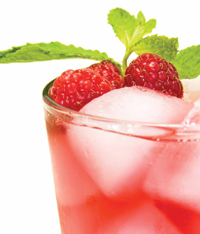 To improve the taste of foods, flavor modification has been practiced for centuries with some historical significance. For example, the spice trade during the Middle Ages and the civilizations that sprang up to support this commerce were partially driven by the need to make stale or spoiled foods more palatable (Burdock, 2003). Licorice root is described in writings, in the latter part of the Hans Dynasty in China, as a flavoring substance to improve the taste of herbal drugs (Kitagawa, 2002).

For the past few centuries, the Japanese have been using dried seaweed, dried mushrooms, and other natural sources of umami substances in their daily cooking to improve the taste of their meals. Over a century ago, a Japanese scientist identified glutamic acid as a flavor-enhancing ingredient in seaweed. Vanillin, commonly used to mask off-taste and provide sweetness in some foods and beverages, was known to be a flavoring chemical as far back as 1816 and was first extracted in its pure form from vanilla beans in 1858 (Matheis, 2007).

Taste Mechanism
Previously, it was believed that the tongue had specific areas that sensed only one type of flavor sensation. For example, sweetness was thought to be only tasted on the tip of the tongue. Later, it was hypothesized that taste buds across the tongue and in some parts of the mouth could detect every type of flavor. Research in the late 1990s and 2000s has shown that the receptor sites on the taste buds can detect only one type of taste sensation but there can be hundreds of receptor sites on each taste bud. The receptor sites for sweet, umami, and bitter contain different proteins that couple to form receptors that are unique for each type of taste sensation (Li et al., 2002; Wenner, 2008).

Not all sweeteners use the same sensing mechanism and there are a small number of sweetener-activated mechanisms (Halpern, 2002). The primary sweetness taste receptor is the G-protein complex formed from T1R2 and T1R3 proteins. Salt and sour tastes are detected via ion channels, which are an assembly of proteins. The hydrogen ion channels detect the concentration of hydrogen ions from acids and lead to the perceived sourness of foods. Saltiness is a taste that is primarily from the presence of sodium ions. Ions of other alkali metals provide saltiness but to a far lesser degree. On the tongue, there are very slight regional differences in sensitivity to the various taste sensations but these differences are minimal. 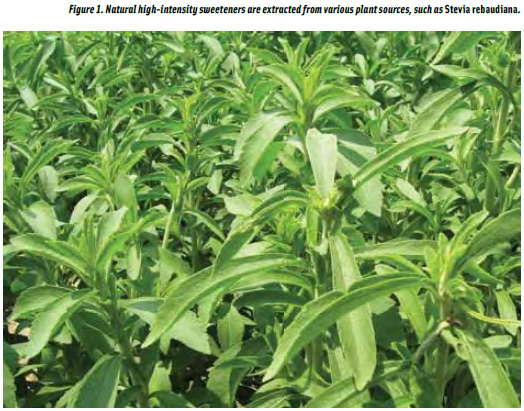 2. Natural high-intensity sweeteners are extracted from various plant sources. Examples of these sweeteners are extracts from Stevia rebaudiana (Figure 1), luo han guo fruit, and glycyrrhizin from licorice root. Sweet-tasting proteins from the fruits of African plants are also being commercialized and include thaumatin from Thaumatococcus daniellii, monellin from Dioscoreophyllum cumminsii, and brazzein from Pentadiplandra brazzeana (Kinghorn and Compadre, 2001). Lysozyme from egg whites is also a sweettasting protein. The difference in the density of charged amino acids on the protein surface may result in varying threshold values for the sweet-tasting proteins, thereby resulting in differing levels of perceived sweetness (Masuda et al., 2005).

The increased demand for high-intensity sweeteners is driven by consumers’ concern for weight management. The World Health Organization estimates that there are over one billion people globally who are overweight, 400 million of which are obese. Unfortunately, these numbers are expected to nearly double by 2015 (WHO, 2006). Launches of new products containing stevia extracts have risen while those of artificial sweeteners have decreased as consumers want no calorie, yet natural, sweetening alternatives (Figure 2). 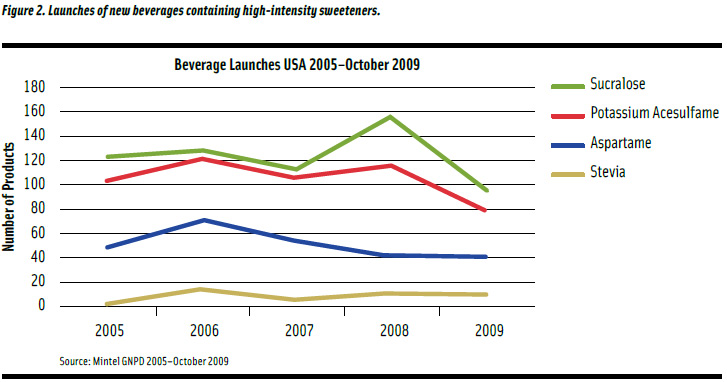 Formulation Challenges & Solutions
To a varying degree, high-intensity sweeteners have inherent flavor issues associated with them. The most common issues are a delay in the onset of the perceived sweetness, a lingering sweetness, bitter aftertaste, metallic aftertaste, a nonlinear sweetener concentration to sweetness equivalency ratio, adaptation or desensitizing, and a lack of mouthfeel or body. Additionally, many of the high-intensity sweeteners extracted from plants have an herbal or licorice-type flavor.

The delay in the onset of the perception of sweetness and their lingering sweetness is hypothesized to be caused by two ccompanying reactions. One reaction is the direct interaction of the high-intensity sweetener with the G-protein coupled receptor site for sweet taste. The other co-occurring reaction happens once the highintensity sweetener permeates into the taste bud and is past the G-protein coupled receptor site. The sweetener directly activates sites that transport stimuli into the nervous system, alerting our brain that we have eaten something sweet (Naim et al., 2002).

Adaptation and cross-adaptation are forms of fatigue. Adaptation is achieved by continuously exposing the taste receptors to a particular taste stimulus, resulting in the flavor perception fading rapidly. Cross-adaptation is when adaptation of one taste may increase or lower the taste threshold of perception for another taste. An example of this is the use of sweeteners in medicines to suppress their bitter flavor.

Taste modification occurs when consumption of a compound creates a new perception of the taste of a food. Tart foods will taste sweet if miraculin, the protein from the miracle fruit, is first consumed. Taste blockers are compounds that prevent the perception of some or all of the flavors. The classic example of this mechanism is the utilization of cloves for an oral analgesic (Foster, 2007). Another example of a taste blocker is gymnemic acid, from the leaves of an Indian vine, that suppresses the sweet taste.

Bitterness reduction is an important requirement for many high-intensity sweeteners to improve their consumer appeal. Organic acids such as aspartic and glutamic acids are known to reduce bitterness (Noguchi et al., 1975). Some of the amino acids, such as glutamic acid and taurine, have been shown to reduce bitterness of some, but not all, of the common bitter compounds. The bitter taste of potassium acesulfame can be reduced by the addition of DL-alanine and glycine. These amino acids contribute a slightly sweet taste. Sclareolide, a natural flavor chemical, has been shown to reduce the bitterness in potassium chloride-based salt substitutes, coffee, and citrus fruits.

Mouthwashes typically employ flavors with a cooling effect to mask bitterness and this approach may also be a benefit in some foods and beverages. Menthol, mint oils, or borneol, or isoborneol have all been used commercially to reduce bitterness in oral pharmaceuticals.

In addition, increasing the viscosity of a food product containing high-intensity sweeteners can decrease the rate of diffusion of the bitter compounds from the food to the taste buds, thereby decreasing the bitterness (Roy, 1997). WILD Flavors, Inc. offers a natural, botanical extract to reduce bitterness of high-intensity sweeteners as well as other bitter compounds. This extract is hypothesized to block the bitter compounds from the receptor site (Gray, 2002). Most bitter blockers used in the food industry have little flavor or odor at their typical use level but help suppress off-flavors in food.

Flavor enhancers allow high-intensity sweeteners to taste more like sucrose. Common flavor ingredients that increase the upfront sweetness and provide more sugar-like notes are strawberry furanone, maltol, ethyl maltol, and vanillyls such as vanillin and ethyl vanillin. Use caution when selecting the use level of such ingredients; overuse may create flavors akin to pancake syrup, cotton candy, or burnt sugar notes. Also, not all of the chemicals listed are considered natural. The addition of aconitic acid or gluconic acid is reported to improve the flavor and provide a slight umami effect, resulting in a fuller mouthfeel (Roy, 1997).

Glycyrrhizin and other glucuronide-saponins of licorice root have a sweet taste and can be used to augment the flavor profiles of other high-intensity sweeteners (Kitagawa, 2002). Ammoniated salts of glycyrrhizic acid are commercially produced flavoring agents that are approximately 50 times sweeter than sucrose. The addition of other plant constituents, such as cynarin, chloragenic acid, and caffeic acid, can provide a more sugar-like flavor profile (Kinghorn and Compadre, 2001). Considered an artificial flavoring agent at restricted levels, neohesperidan dihydrochalcone can be added to high-intensity sweeteners to modify the sweetness profile and reduce bitterness.

Sugar alcohols and other polyols provide sweetness and mouthfeel to products containing high-intensity sweeteners. Glycerol can increase the sweetness, and at higher levels, can heighten the perceived viscosity (Noble and Bursick, 1984). Sugar alcohols—such as erythritol, mannitol, xylitol, and sorbitol—effectively add back mouthfeel and body to foods formulated with high-intensity sweeteners. Also, these sugar alcohols have varying degrees of sweetness and cooling effect. Except for erythritol, sugar alcohols may cause gastrointestinal distress when consumed at high levels, making them inappropriate for use in beverages because of their large serving sizes.

A unique approach to modifying the sweetness perception involves the role of water in sweet taste perception. The addition of solutes will interact with the water structure. Salts, such as sodium gluconate, decrease the apparent specific volume of high-intensity sweeteners and subsequently alter the taste perception and decrease the possibility of tasting bitter. This role of the water structure may also explain the observed synergistic effect of salt-structured, high-intensity sweeteners, such as sodium saccharin, potassium acesulfame, and sodium cyclamates, with bulk sweeteners. A 50:50 mixture of sodium cyclamate with maltitol had a 27% synergy level (Birch, 2002). 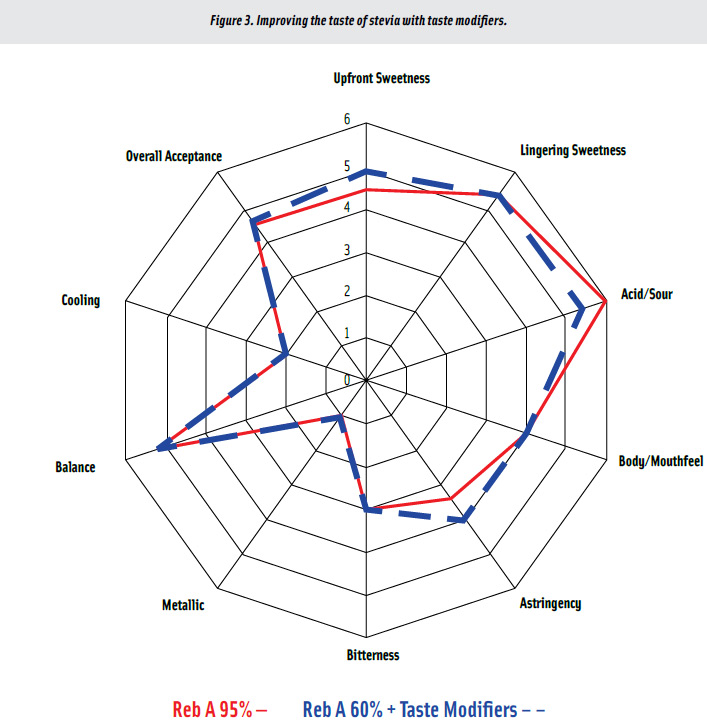 Stevia and Beyond
Enhancing the taste of high-intensity sweeteners is a growing opportunity as consumer demand for reduced-calorie products rises. Reduction of bitter and metallic taste has been achieved and many flavor houses offer commercially produced bitter blockers and/or flavor masking agents.

WILD Flavors recently developed a sweet taste modifier for rebaudioside (Reb) A 60%, a stevia extract with 95% steviol glycosides and deemed a GRAS sweetener for foods and beverages in the United States. By using a trained sensory panel, many of the attributes of Reb A 95% were matched with Reb A 60% and taste modifiers (Figure 3). In fact, two attributes—improved onset of sweetness perception and less sour taste—were judged to be better for Reb A 60% with taste modifiers than for Reb A 95%.

The future looks bright as flavor houses, suppliers of high-intensity sweeteners, packaged goods companies, and contract research facilities work together to explore new techniques to rapidly and costeffectively test new compounds for improving the taste of highintensity sweeteners and to improve our understanding of the mechanism of perceiving sweet tastes. Governmental pressure for healthier foods products and consumer demand for lower-calorie products will continue to fuel this research.

The author would like to thank J. Jones-Dille, S. Seiler, and K. Sparks for their assistance in writing this article; and for his wife, Astrid, for all her support throughout the years.