Flavor analysis has many applications in the food and beverage industry. They include identifying flavor components in natural foods and beverages, such as fruits, vegetables, meat, milk, etc., so that particular components can be enhanced, reduced, eliminated, or duplicated; identifying sources of off-flavors and off-odors; monitoring the quality of foods and beverages; determining the shelf life of products; analyzing for contaminants and adulteration; checking raw materials before formulating products and checking finished products before shipping them; and other applications. Companies may also analyze a competitor’s product to duplicate it or gain an advantage by making a better, or perhaps less-expensive, product, a process referred to as “reverse engineering.” 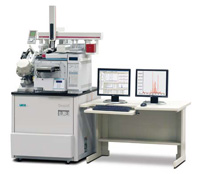 Analytical Methods
The primary technique used in flavor analysis is gas chromatography, with and without mass spectrometry and olfactometry. Hall said that since most flavor and fragrance compounds are volatile, GC is the method of choice. Pfannkoch agreed that the majority of analyses of flavor in foods are done by GC but added that liquid chromatography also plays a significant role in flavor analysis, particularly for sugars, capsaicin, protein fragments (umami), and other compounds that are not amenable to GC because they are nonvolatile, thermally labile, or too polar to be separated by GC.

• Gas Chromatography. As a flavor or food sample passes through a heated capillary column, the chemical components are evaporated and separated, producing peaks according to the time it takes to reach a detector, such as a flame ionization detector, the most common type.

Calling multidimensional separation a significant advance in flavor analysis, Pfannkoch said that there are two basic types: comprehensive GCxGC and heart-cutting GC. In comprehensive GCxGC, he said, the effluent from one GC column is injected into a second column, increasing resolving power and resulting in a very complicated analysis, suitable for detailed sample characterization and component class determinations. This technique typically is best done with a fast time-of-flight (TOF) mass spectrometer, like LECO’s Pegasus®, he said. In heart-cutting GC, a small region of the gas flow from one column containing specific peaks of interest is diverted by a pressure controller called a Dean’s switch to a second column and analyzed. Agilent Technologies, Inc., Santa Clara, Calif. (www.agilent.com) utilizes this approach in its instruments, he said. Heart-cutting GC, he added, can be coupled to olfactometry and is gaining in popularity.

• Mass Spectrometry. Passing the effluent from the GC into a mass spectrometer allows identification and quantification of the chemical components detected by the GC. Hall said that the three most-used types of MS are quadrupole, ion-trap, and TOF. The first two typically provide 10 spectra/sec. LECO’s Pegasus HT TOFMS system, the fastest GC-MS on the market, according to Hall, provides 500 spectra/sec.

• Olfactometry. One of the challenges ahead is trace composition analysis, Pfannkoch said, particularly to identify compounds that are present at very low concentrations but are very odor active, providing subtle nuances of odor or off-odor. They may be present at levels that can’t be detected instrumentally but can be detected by the nose. In olfactometry, regions of the gas flow from the gas chromatograph can be split, sent to a mass spectrometer and to a sniff port, where the effluent can be sniffed to identify the particular odor.

Deconvolution
Marsili said that one of the problems with GC is that although we get very good sensitivity and lower detection limits, we might also get coelution—overlapping—of peaks. Separation of the peaks can be accomplished through the use of deconvolution software consisting of algorithms that provide precise, rapid compound identification and quantification. The algorithms identify target compounds present even in complex mixtures.

Extraction Methods
Some compounds such as essential oils (orange, lemon, etc.) can be directly injected into the GC and analyzed, Pfannkoch said, but once the compounds are formulated into a product, they need to be extracted before injection. There are two primary methods of extraction: solvent based and solventless. Solvent-based extraction is widely used, he said, but has a major shortcoming in that the solvent is also being injected into the GC and might obscure the peaks of interest.

Among the most widely used solventless techniques, Qian said, are solid phase microextraction (SPME); solid phase dynamic extraction (SPDE); and stir bar sorptive extraction (SBSE). SPME uses an absorbent coating on fiber within a syringe that is exposed in the headspace over a sample in a vial. After equilibration, the compounds concentrated on the SPME fiber are thermally desorbed into a GC. SPDE is similar to SPME, except that the coating is on the inside of a syringe needle and the syringe must be pumped repeatedly to draw sample across the phase.

Pfannkoch said that among the solventless methods, SBSE, available commercially since about 2000, is gaining a lot of popularity. It’s easy to use and very quantitative. One problem analysts face in trace analysis, he said, is getting enough mass of the sample introduced into the GC so it can detect the trace component.

In SBSE, a stir bar—a magnet within a glass jacket with a coating of the nonpolar compound polydimethylsiloxane (PDMS) around it—spins within a liquid sample to absorb volatiles. (A variation of SBSE is headspace sorptive extraction, HSSE, in which the stir bar hangs in the headspace above the sample.) The volatiles are then thermally desorbed and introduced into a GC. Marsili said that PDMS is highly inert, retains no water, selectively eliminates polar matrix interferences, and provides extremely low detection limits (ppt to ppq).

Pfannkoch said that PDMS is selective for nonpolar compounds such as terpenes, whereas shorter-chain acids and polar compounds such as aldehydes and ketones are not as well extracted. Qian said that SBSE has a higher sensitivity than SPME for nonpolar and some medium-polar compounds because of the increased volume of absorbent phase. It is primarily used for nonpolar and medium-polar compounds and may not be the best technique to extract highly volatile polar compounds. Since many compounds in fruits and other foods are polar, they are relatively difficult to analyze by SBSE. So in some cases, Marsili said, it’s better to use alternative sample preparation procedures like SPME, dynamic headspace analysis, purge-and-trap analysis, etc. No one sample preparation technique can be used for all sample matrices and analyte types, he said, so the flavor chemist’s experience is used to decide which techniques are most appropriate for the analytes and samples being investigated.

Pfannkoch added that for polar volatile compounds, SPME phases are available that can work well, so SPME and SBSE can be considered complementary techniques.

Other techniques also used
Among other techniques besides GC-MS-O that are also being used to analyze food and beverage flavor are Fourier Transform Infrared Technology (FTIR) and Selected Ion Flow Tube Mass Spectrometry (SIFT-MS).

Among other techniques besides GC-MS-O that are also being used to analyze food and beverage flavor are Fourier Transform Infrared Technology (FTIR) and Selected Ion Flow Tube Mass Spectrometry (SIFT-MS).

• FTIR. Researchers at Ohio State University are using FTIR technology to analyze Swiss cheese flavor. Presenting a paper at the 2008 IFT Annual Meeting & Food Expo in June, Angela Eliardi said that she and her coworkers determined the relationship between FTIR and descriptive sensory profiles obtained by a trained sensory panel. Flavor compounds were extracted from powdered samples of Swiss cheeses from different manufacturers, and aliquots of the water-soluble fraction were placed on a ZnSe crystal and vacuum dried. Spectra collected in the mid-infrared region were analyzed using soft independent modeling of class analogy (SIMCA) to build a classification model. The relationship between the descriptive sensory scores and FTIR spectra was assessed using partial least squares regression (PLSR) analysis. The pattern recognition analysis indicated that FTIR could differentiate Swiss cheese flavor from the different manufacturers.

• SIFT-MS. Researchers at Syft Technologies Ltd. (www.syft.com) have used the company’s Voice200® SIFT-MS instrument to characterize the headspaces of cheese and chocolate, provide early detection of rancidity in edible oils, and analyze flavor release as confectionery is chewed. The technique instantaneously identifies and quantifies volatile organic compounds in complex gas mixtures at parts-per-trillion concentrations in real time. No sample preparation is required. The instrument utilizes well-characterized gas-phase reactions of multiple soft chemical ionization agents, and the VOCs are quantified on the basis of their known ion products and reaction rate coefficient.