March 6, 2009: “A Northwest Side firm that produces Mexican food products was ordered Friday to stop doing so after alleged unsanitary conditions at the plant led to school children getting sick from eating its products.”

These were the opening paragraphs of stories I found after being engaged by the firm in question to help them resolve their issues with the Food and Drug Administration (FDA). One might reasonably conclude that the firm was a repeat offender, but, as will be explained, there was no evidence of anyone getting sick from the products in 2009. The stories went on to refer to incidents that had occurred in 2004 and 2007. Nonetheless, the company signed a federal consent decree brought by the local U. S. Attorney, imposing certain obligations. This column shares some lessons learned from the experience of restoring the small bakery to operation. Dealing with somewhat unfair and misleading news reports was among the least of our concerns. Specific names are not used so as to focus on the lessons and experiences. 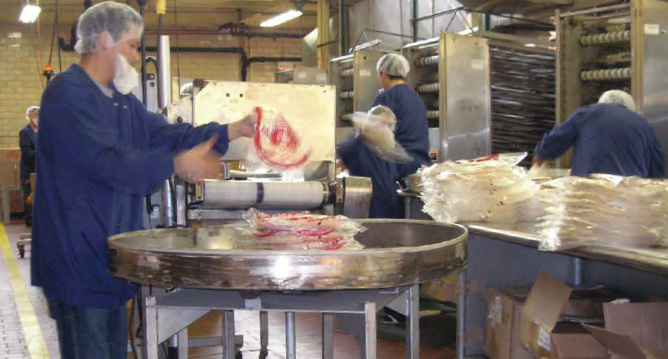 What Apparently Happened
The tortilla bakery is a well-established, family-run small business selling corn and flour tortillas, masa for tamales, tortilla chips, and a few other typical Mexican foods. All of the employees speak Spanish.

The tortilla bakery is a well-established, family-run small business selling corn and flour tortillas, masa for tamales, tortilla chips, and a few other typical Mexican foods. All of the employees speak Spanish.

In the previous incidents, school children in several states became ill within about one hour of eating burritos. Because the burritos had been prepared by several different companies, FDA investigators concluded that the tortillas were the common potential factor. Because the effects appeared so quickly, it was considered unlikely that the cause was microbial. Most foodborne pathogens require some time to take effect. The facts in these cases pointed to possible chemical effects.

All of the ingredients used in the tortillas are approved for food use, but an overdose of some preservatives could cause the effects observed, especially in children, for whom a smaller dose would be effective, due to lower body weight. At the time, the minor ingredients were being scaled by workers into the mixer. These ingredients include leavening, salt, dough conditioners, and mold inhibitors.

Having identified the tortillas as candidate causes, the FDA inspected the facilities and found conditions that required correction. On an FDA inspection, observations are noted on a Form 483. Many can be, and are, remedied on the spot, but others may require more extensive actions. These are reconciled by letter to FDA. The tortilleria was cited in 2004 and in 2008 for using improper containers for food ingredients, for having dirty exhaust fans, for having cleaning chemicals in the production area during production, and for having other materials out of place.

Some people in the FDA thought that the re-use of containers that had contained chemicals might have led to chemical contamination of the product and that this explained the illness affecting the children. Later, the Centers for Disease Control (CDC), which investigates cases of foodborne illness, concluded that an overdose of calcium propionate, one of the mold inhibitors, was the more likely cause. This is important, because some of the later severe treatment of the firm resulted from associating the observed instances of non-compliance with Good Manufacturing Practices (GMP) with the sickness outbreak. In fact, there was another remedy for the most likely actual cause, which the firm adopted.

Instead of scaling each minor ingredient, in early 2008, the firm had a pre-mix of all the minors formulated and packaged in a unit sized for its scale of the mix batch. This is a common practice in baking, and the tortilla company’s supplier makes pre-mixes for many of their competitors. (Flour tortillas have been the fastest-growing segment of the baking industry for several years.) Since adopting the pre-mix, there have been no incidents of illness attributable to the firm’s products. While suspect product had been recalled in 2004 and 2006, there was no requirement to do so in 2009, though this was not made clear in news reports.

Recent Events
In late 2008, there was a well-reported occasion of Salmonella-contaminated peanut products being widely distributed and causing hundreds of cases of disease and some deaths. Whenever there is a serious case of food contamination, the FDA comes under political pressure to demonstrate its vigilance. The agency is staffed thinly and has responsibility for the safety, not only of food, but also of pharmaceuticals and medical devices. It is impractical to inspect every food manufacturing facility, so attention is focused on those firms and plants that have previously come to the agency’s attention. This actually makes good sense as a way to allocate limited resources. Unfortunately for the firms involved, it means that even if conditions have been significantly improved, they are likely to remain on the radar screen for some time.

In late 2008, the tortilleria was inspected by the FDA, and some instances of non-compliance were observed. Most were readily corrected, but with a history of citations and recalls at the firm dating from 2004, the FDA went to the U.S. Attorney and obtained an injunction and the subsequent consent decree. The decree is a long legal document, which stipulated that production and distribution had to cease until the FDA approved a number of specific steps. Among these were the requirements to hire experts to prepare a sanitation program, a food quality control program, training programs in each of these areas for all employees, and then to certify to the FDA that this had all been done. All pending Form 483s had to be resolved. The firm also had to designate responsible parties among their employees for the two areas (sanitation and quality), post copies of the consent decree in Spanish and English, and provide all the documents in both languages.

This significant segment of the firm’s business was shut down, putting 55 people out of work and seriously endangering their relationships with customers. (The company could still make corn-based products.)

A colleague and I were selected as the required experts. Interestingly, the consent decree did not stipulate that the FDA had to approve us, just our work. We prepared a proposal and cost estimate, and then reduced our estimate to try to make it more palatable. (Our actual time spent was only a little more than our reduced estimate.)

What We Did
The consent decree was quite detailed and clearly prepared by FDA personnel, who knew what was needed and what they wanted to see. We took it quite literally and followed it scrupulously. A few important lessons here are that the FDA does, in fact, know what it is doing in most cases. While I disagreed with their concern about reuse of containers, it was irrelevant, because the need for most containers went away when pre-mix was adopted, and where containers were needed, we obtained food-grade buckets that were clearly labeled. We tried to make the FDA review of our work easy by adhering to the language and terms they used.

Since we had not seen the plant operate because we were engaged after the shutdown, we asked the firm to make a short run. We used that run to confirm that mixing was adequate. Later, the FDA said that was a violation of the decree, even though the products were not for sale. We should have requested permission first, but we did not know that. More seriously, the firm distributed some product made before the decree was signed, not realizing that was a violation. They had to notify customers to destroy or return that product, but most was probably consumed by then. Now we know to ask if you want to do something that could be seen as violating the agreed-upon terms. We learned that the FDA has both a group of investigators and a group that establishes compliance. The investigators are the eyes and ears of the agency, but the compliance group evaluates submissions. They also need to coordinate with Washington, D.C., headquarters. All of this takes time. We managed to establish communication with the compliance director, a very busy, experienced, and skilled executive, who was responsive to inquiries. Our first submission of plans and training material was returned with several pages of comments and questions. The director gave good and helpful advice about what the comments meant. Our second submission, hand delivered, resulted in a letter of approval, subject to a final inspection. A uniformed officer of the U.S. Public Health Service arrived and said that as soon as we presented the training, production could resume. Within an hour, the work force had been notified, assembled, and trained in Spanish by one of the tortilleria’s managers. New smocks and picture IDs were issued. That afternoon, about six weeks after the consent decree was signed, six lines were operating.

As the Kingston Trio once sang, “This could happen to you.” The experience was a good reminder of the importance of being prepared and inviting fresh eyes to view your plants.