The world of nano-enabled food and beverage packaging was valued at $4.2 billion in 2008 and forecast to grow to $7+ billion by 2014, according to 2009 statistics from Report Linker (www.reportlinker.com). The data show that, at $2.7 billion, active packaging comprises the largest single nano fraction worldwide, followed by intelligent packaging at $1 billion, and controlled release packaging at $360 million. 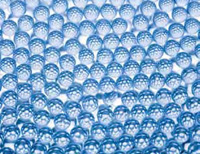 As a long-time observer and participant in the universes of nano, active, and intelligent packaging, I note a certain paucity of precision in defining these technologies and markets for this report. Ferrous-based oxygen scavengers in sachets or incorporated directly into package materials are not currently nano in scale. And RFID devices have yet to be reduced to the one billionth of a meter size.

Our interim conclusion then is that, however meritorious the new and highly publicized market data are, they do not report on nanotechnologies for packaging as much as they detail active and intelligent food packaging. One might draw a parallel to the way in which the book title Moby Dick and its famous first line, “Call me Ishmael,” do not even hint at the adventure that follows. Why then do so many, including professionals, scurry to the large fonts and opening statements but evidently fail to read the small print to grasp and comprehend facts? Even though the predicted market sizes are not nearly the billions claimed, nanotechnologies are nevertheless exciting enough to warrant both technical and financial investment to achieve—at the very least—commercial evaluation.

Establishing Definitions
With hardly a nod to the marketing interests and potential, a recent, much more responsible and accurate review article published in the January/February 2010 issue of Journal of Food Science scraped the surface of the peer review literature to try to present an organized view of published facts from nearly 100 articles (Arora and Padua, 2009). “Fibers, platelets and particles have been used for decades to form polymer composites with enhanced mechanical and thermal … [and] barrier” … properties, state Arora and Padua.

“Nanocomposites are materials in which the filler has at least one dimension smaller than 100 nanometers,” Arora and Padua write. The proper discontinuous incorporation of small quantities—on the order of 1–5% nano material adjuncts in a polymer matrix—can markedly alter the mechanical, thermal, and barrier properties of the total mass. Due to the almost total alteration in particulate properties arising from the size and dramatically increased surface-to-volume ratio of nano materials over even micromaterials, the net property change can be significant.

Many inorganic and organic materials can be converted into nano scale to exhibit beneficial characteristics, but only a relatively few are in the commercially economical range. Only 1–5% of any filler coupled with its conversion process can be expensive in a polyethylene or polyester matrix for the advantage achieved. The most studied nanocomposites to date in the commercial world are montmorillonite clay (MMT), kaolinite, carbon tubes, and graphene. MMT is magnesium aluminum silicate mineral about 1 x 500 nm formed into hundreds of layered platelets stacked into particles or tactoids about 8–10 μm in size. Exfoliated and dispersed into the polymer matrix, they create a nanocomposite, tortuous-path maze that interferes with the flow of gasses such as oxygen or water vapor. Carbon-based graphene platelet nanocomposites 20– 60 nm thick and 0.5–25 μm in diameter at 1–5% loading increase heat resistance and gas barrier. At 1% loading levels, carbon tubes can improve modulus by 15—30%. 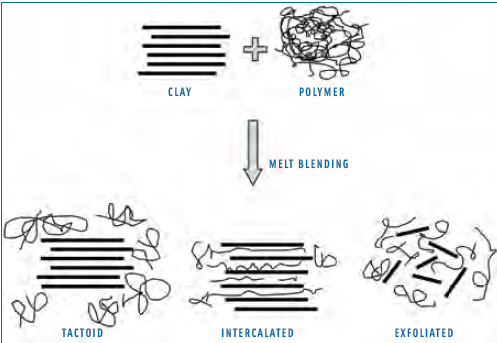 The Technologies of Nanocomposites
“Nanoclay technology relies on the high surface area of the clay platelets, in excess of 750 sq m/g and high aspect ratio (100:500/thickness:length). However, MMTs come in platelet clusters with little surface area exposed,” according to Arora and Padua. Thus, high shear processing of the natural clays is required to deaggregate the clusters into the requisite high surface:volume platelets. The types of formations are intercalated when moderately expanded into the polymer chains and exfoliated when the clusters lose their identities by being well separated into single platelets within the polymer phase due to a high affinity between the polymer and clay. The greater the number of single platelets, the higher the property enhancement. Dispersion of the clay layers into the polymer is adversely affected by mismatches between the hydrophobic polymers and the hydrophilic clays. Treatment of the clays is essential to modify the surface areas and increase compatibility of clays and polymers.

Biopolymers
Biopolymers have been highly—perhaps too highly—publicized for their potential as package materials that are sustainable, i.e., their sources can be renewed. The contrary nature of biopolymers is well known to food packaging technologists: by themselves, biopolymers display inferior properties as package materials. Arora and Padua mention and describe a list of natural biopolymer nanocomposites such as seashells, bone tissue, and mineralized collagen. The authors suggest that these structures and the principles of their deficient functionalities as package materials could represent a promising avenue for research. Some referenced sources have reported on chemically treated nanoscale silicate plates such as hyper-patty, nanodimensional thickness crystals that create the tortuous path to inherently resist gas permeation.

Starch and Cellulose
Starch-clay composites are claimed to be biodegradable nanocomposites in which the MMT clay functions to reduce water vapor transmission through the hydrophilic starch matrix. Zinc oxide nanoparticles functioned as the tortuous path particles after stabilization by carboxymethylcellulose. Cellulose was the original barrier “plastic” film under its generic designation of regenerated cellulose and its popular trade name, cellophane. Old timers might recall that cellophane (which has recently made a comeback as a natural degradable package material) was moisture- and temperature-sensitive and required organic coating to retain its modest barriers.

A variation is chitosan nanoparticles in a hydroxymethyl cellulose matrix which, of course, could lead to an integrated biodegradable biofilm barrier with migratory antimicrobial properties—the lost ark that food packaging technologists have been seeking.

Polylactic Acid
Without question, the most publicized package material of the past decade is polylactic acid (PLA). Derived from corn starch, PLA has been associated with package material properties akin to polyester (in reality, much closer to polystyrene), and also degradability through composting. PLA is the most nearly perfect package material ever devised if the surrounding hyperbole is to be read literally. Those who have objectively evaluated PLA are aware of boundaries that were originally mitigated by incorporation of petrochemical-derived plastics. More recently—or since the facts were disseminated that a miracle had not risen from the lactic acid fermentation tanks—the notion of enhancing the modest PLA properties by coating and/or incorporation of nano kaolinite or MMT have been gradually gaining credence.

Related to the drive to move PLA into the ranks of totally functional package materials is the coating of (biodegradable or recyclable) paper and paperboard with nanocomposite clays, not for the usual surface color and smoothness but for water vapor barrier instead of almost universally applied polyethylene. It is amazing the contortions some will undergo to convert minimally functional material into something we already have operational in widely available and inexpensive petrochemical-based plastics.

Innovations for Food Packaging
Well within the nano universe is nano sensing which, in laboratory settings, has been demonstrated to detect and then signal the presence or absence of some functionality such as spoilage microorganisms. Some claim that nano sensors can differentiate pathogenic from benign or spoilage microorganisms. Combining the nano identification with nano transmitters that have been demonstrated at Georgia Tech, the concept of foodborne microbial signaling could be feasible. At the other end of the nano spectrum, at the University of Georgia Dept. of Food Science and Technology, Professor Jake Mulligan has been performing research on modified nanoparticles for trapping microorganisms and even lysing their membranes to block their passage.

Safety Issues
No discussion of nano materials for food packaging—or any other kind of packaging—can be complete without a review of the debates on the safety of nano packaging. Accusations have been raised that the food industry has been hiding information that might rule against the commercial application of this potentially powerful set of technologies. A recent UK House of Lords’ Science and Technology Committee report asserts that the industry has been too secretive about potential health and safety implications. The concern is that because of their size, nanoparticles could readily slip through into human membranes, and that we know too little about the intracellular properties of high surface-to-volume particles. Consequently, a public backlash would arise.

On the other hand, the International Packaging Industry Research Association (PIRA, www.piranet.com) stated its position that nano packaging is not yet commercial for commercial, i.e., cost, reasons and not because anyone is trying to minimize any possible health risks (Harrington, 2010).

I conclude by saying: Welcome again to the mysteries of research and development:misinformation, misdefinition, and, consequently, misdirection. Loyal readers of this column may wish to refer back to my March 2006 Food Technology column on nanocomposites for food packaging and note that the facts of the technologies are much as they were then—with intriguing potential but not very worthy of instant uptake. The situation analysis is this: Keep working and looking, for some day, perhaps soon, the headline “Nano Breakthrough” will be real.