Packaged Facts estimates the global retail market for probiotic and prebiotic foods and beverages at approximately $15.4 billion in 2008; that total represents a 12.5% increase over estimated 2007 sales of $13.7 billion. In 2008, the growth rate for the probiotic and prebiotic food and beverage market ranged from 5% to more than 30%, depending on the region and product type. Packaged Facts analyzed Datamonitor’s ProductLaunch Analytics data that tracked the global probiotic/ prebiotic food and beverage market by number of products for 2008. It found that dairy-based foods accounted for 55.5%, nondairy beverages for 10.7%, grain-based foods for 10%, and meat products for 1.4%. 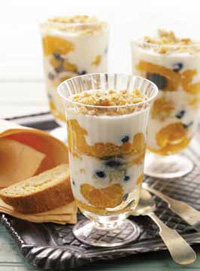 Thanks to ongoing research and ingredient advances, consumers will see a wider variety of foods and beverages that contain beneficial probiotics and prebiotics.

Probiotics
The FAO/WHO definition states that probiotics are “live microorganisms, which when administered in adequate amounts, confer a health benefit on the host.” Last year, the International Scientific Association for Probiotics and Prebiotics (ISAPP) released a clarified definition of a probiotic, which adds to the specifications outlined by FAO/WHO, stating key aspects for probiotic use in food:
• A probiotic must be alive when administered.

• A probiotic must have undergone controlled evaluation to document health benefits in the target host.

• A probiotic must be a taxonomically defined microbe or combination of microbes (genus, species, and strain level).

• A probiotic must be safe for its intended use.

Ingredient suppliers have been focusing on enhancing probiotic stability, ultimately making it easier to add the beneficial bacteria to a wider variety of foods and beverages. For example, in September 2009, Bigelow Inc., Fairfield, Ct. (phone 888-244-3569, www.bigelowtea.com), launched a line of herbal teas formulated with healthy herbs and nutrients. Lemon Ginger Herb Plus supports a healthy digestive system with a combination of lemon, ginger, and a patented Bacillus coagulans GBI-30, 6086 (GanedenBC30®) from Ganeden Biotech Inc., Mayfield Heights, Ohio (phone 440-229-5200, www.ganedenlabs.com). GanedenBC30 is able to withstand the heat needed to brew tea and survive harsh stomach acids to reach the intestines.

Danisco, New Century, Kan. (phone 913-764-8100, www.danisco.com), recently discussed a patent-pending encapsulation technique that promises significantly improved probiotic stability at high temperatures and during storage in semi-moist applications. Trials conducted with an encapsulated Lactobacillus acidophilus have found that resistance to temperatures up to 50°C increased 10-fold when heat treatment was applied for 24 hours under dry conditions. Additionally, the probiotic retained 60% viability after five months storage at room temperature in a nutritional bar with a moisture level of 0.35 aw. Subsequent tests conducted on the encapsulated probiotic in a recombined cheese application showed processing resistance 2,500 times superior to that of the control.

In addition to innovation in ingredient stability, research into probiotic health benefits continues. Institut Rosell, Montreal, Canada (phone 800-452-4364, www.institut-rosell-lallemand.com), and the Biotechnology Research Institute in Montreal recently developed a DNA microarray specific to immunity that will study the effects of probiotic bacteria–human cell interactions upon the expression of genes involved in the immune response. In total, 1,354 genes appear on the microarray. The company offers ProbioKid®, which combines a blend of three well-documented probiotic strains—Rosell-52, Rosell-71, and Rosell-33—with a prebiotic (fructo-oligosaccharide). Using the microassay, it appeared that ProbioKid was able to modulate the expression of several genes involved in immunity. The company recently presented research showing that a three-month daily supplementation with ProbioKid during the winter was able to reduce the risks of common infections in children.

Other studies have shown that probiotics benefit intestinal health. Kalman et al. (2009) showed that GanedenBC30 reduced intestinal gas symptoms in healthy adults and improved quality of life even for those without specific gastrointestinal disorders. The study found that subjects taking Digestive Advantage Gas Defense Formula, an over-the-counter product marketed by Ganeden that contains GanedenBC30, experienced statistically significant improvement vs those who took a placebo over the four weeks of product use.

Baron (2009) also showed that GanedenBC30 may be a safe and effective therapeutic option for enhancing T-cell response to certain viral respiratory tract infections. The study examined the effects of the ingredient on the immune system when exposed to adenovirus and influenza in otherwise healthy adults. The subjects (10 men and women, average age of 44) consumed one capsule of the probiotic with water once a day for 30 days. At baseline and after completion of the 30-day treatment, the results showed that probiotic consumption significantly increased T-cell production of TNF-α in response to adenovirus exposure and influenza A (H3N2 Texas strain) exposure.

Leyer et al. (2009) showed that the proprietary probiotic formulation, Howaru® Protect from Danisco USA Inc., Madison, Wis. (phone 800- 255-6837, www.danisco.com, www.howaru.com), reduced the incidence and severity of cold and flu symptoms in children. They gave 326 children (ages 3–5) supplements twice a day for six months. The children were put into one of three groups: the first group received a single strain of L. acidophilus NCFM®, the second received a combination of L. acidophilus NCFM and Bifidobacterium lactis Bi-07, and the third received a placebo. The subjects in the first and second groups had a reduced fever incidence of 53% and 72.7%, respectively, compared with those who took the placebo. Additionally, coughing was reduced by 41.4% and 62.1%, respectively, and runny noses were lessened by 28.2% and 58.5%, respectively. The duration and severity of cold and flu symptoms were also significantly reduced in the subjects receiving the probiotics.

Prebiotics
Prebiotics are non-digestible food ingredients that have a beneficial effect through their selective metabolism in the intestinal tract. According to ISAPP, three criteria are required for a prebiotic effect: resistance of the prebiotic to degradation by stomach acid, enzymes, or hydrolysis; fermentation of the prebiotic by intestinal microbes; and selective stimulation of the growth and/or activity of positive microorganisms in the gut.

Recent research has studied the effects of prebiotics on a variety of health concerns.

Drakoularakou et al. (2010) showed that a supplement of a prebiotic galacto-oligosaccharide mixture reduced the incidence of travelers’ diarrhea (TD). The study included 159 healthy subjects, who had travelled for a minimum of 2 weeks to a country of low or high risk for TD. One week prior to travel, the subjects recorded bowel habit while receiving the prebiotic galacto-oligosaccharide mixture. Consumption of the mixture showed significant potential in preventing the incidence and symptoms of TD and abdominal pain.

Danisco, Elmsford, N.Y. (phone 913-764-8100, www.litesse.com), formulated its prebiotic offerings, Litesse® polydextrose and lactitol with its probiotic Howaru Dophilus in a strawberry yogurt–filled confection and vanilla wafer. The combination of prebiotic and probiotic creates a synbiotic effect with digestive health benefits. The positive effects of Litesse as a sustained prebiotic are apparent at doses as low as 4 g/day in humans. The results indicate that the ingredient is fermented slowly and consistently throughout the colon, selectively stimulating the growth of Lactobacilli and Bifidobacteria, enhancing immune response, especially in combination with lactitol, and promoting the generation of short-chain fatty acids that have documented colonic health benefits.

• Mineral Absorption. Van den Heuvel et al. (2009) showed that a short-chain fructo-oligosaccharide improved magnesium absorption in teenage girls. The researchers gave 10 g of scFOS or maltodextrin (placebo) for 36 days to 14 girls ages 12–14. The ingredient was taken daily for 8 days followed by an intermittent intake mode on 28 random days to mimic noncontinuous intake. This random intake equated to an average daily intake of 7 g/day. The results showed that scFOS increased magnesium absorption by 18% after 36 days.

• Cancer. Munjal et al. (2009) indicated that products of prebiotic fermentation in the gut may prevent the growth ofand promote the death of cancer cells in the colon. The researchers prepared a fermentation supernatant fraction of inulin enriched with the oligofructose Orafti®Synergy 1 from BENEO-Orafti, Morris Plains, N.J. (phone 973-867-2140, www.orafti.com), and studied biological properties in human colon cell lines LT97 and HT29 (representing early and late stages of colon cancer). The prebiotic was incubated under anaerobic conditions with fecal inocula and the supernatant fraction was characterized for content of short-chain fatty acids (SCFA) and secondary bile acid deoxycholic acid (DCA). Upon incubation, the researchers noted a 2.5-fold increase in SCFA levels and a 3.4-fold decrease in DCA, compared to a control sample. Using the cell lines, the results showed growth-inhibiting and apoptosis-inducing effects of fermentation supernatant fractions of inulin. In addition, early adenoma cells were found to be more sensitive, suggesting important implications for chemoprevention when translated to the in vivo situation.

Le Leu et al. (2005) demonstrated that the combination of the resistant corn starch Hi-maize® from National Starch Food Innovation, Bridgewater, N.J. (phone 800-743-6343, www.foodinnovation.com), and the probiotic bacteria B. lactis increased apoptosis (programmed cell death) of cells damaged by carcinogens by more than 30%. The study also confirmed that the resistant starch (RS) reduced pH levels in the large intestine, increased the growth of Lactobacilli and Bifidobacteria, and increased SCFAs, including butyrate (all biomarkers for a healthy colon). The researchers added lyophilized cultures (1 x 1010 cfu/g) of L. acidophilus and/or B. lactis at a concentration of 1% by weight to a semipurified diet containing either low-RS (no supplemented RS) or moderate-RS (10% Hi-maize). This was fed to male Sprague-Dawley rats for 4 weeks. The symbiotic combination of RS and B. lactis significantly facilitated the apoptotic response to a genotoxic carcinogen in the distal colon of rats. It appears that ingested RS acts as a metabolic substrate, thus creating the right conditions for B. lactis to exert its proapoptotic action.

• Weight Management. Parnell and Reimer (2009) examined the effects of the oligofructose OraftiP95 from BENEO-Orafti on body weight and satiety hormone concentrations in overweight and obese adults. The researchers randomly assigned 48 overweight or obese but otherwise healthy adults to receive 21 g of oligofructose/day or a placebo for 12 weeks. The subjects who took the oligofructose experienced a significant reduction in body weight of 1.03 kg, while the control subjects gained 0.45 kg. The weight loss affected mainly body fat mass, particularly trunk fat mass. Consumption of the prebiotic was also associated with lower levels of the hunger hormone ghrelin and higher levels of a hormone in the gut that is linked to increased feelings of fullness.

Abrams et al. (2007) assessed the effects of a prebiotic supplement and usual calcium intake on body composition changes during pubertal growth. They randomly assigned 97 subjects ages 9–13 to receive either 8 g of OraftiSynergy1 or a placebo (both via orange juice or milk) for one year. The results showed that the increment in body mass index over the intervention year was much lower for those who took the prebiotic. Additionally, body weight and body fat mass were significantly lower in these subjects. When the researchers examined subjects with higher calcium intakes (greater than 700 mg/day), they found that the associated benefits were increased.

Al-Tamimi et al. (2010) showed that the resistant wheat starch Fibersym® RW from MGP Ingredients, Atchison, Kan. (phone 800-255-0302, www.mgpingredients.com), was effective in lowering glycemic and insulin response. They gave two nutritional bars and a control glucose drink to 13 subjects after a 12-hour overnight fast. The nutritional bars and the glucose drink each delivered 50 g of available carbohydrates. The resistant wheat starch significantly attenuated the glycemic and insulinemic responses even when high glycemic ingredients such as brown sugar and corn syrup represented 31% of the nutritional bar formula.

• Immunity. Larch arabinogalactan (LAG) is a polysaccharide powder derived from the wood of the larch tree. Lonza Inc., Allendale, N.J. (phone 201-316-9200, www.lonza.com), offers FiberAid™. Evidence from human and in vitro studies indicates LAG ingestion has a significant effect on enhancing gut microflora, specifically increasing anaerobes such as Bifidobacteria and Lactobacilli. FiberAid increased SCFA in the gut, decreased the generation and absorption of ammonia in the gut, and is reported to have no glycemic response. The larch arabinogalactan is used in another Lonza ingredient, ResistAid™, which recently demonstrated a positive immune response by increasing the antibody response to the 23-valent pneumococcal (pneumonia) vaccine. The study further showed that ResistAid had an immunomodulatory effect, meaning that it enhanced the appropriate response to the antigen without indiscriminately enhancing other arms of the immune system that would not be expected to respond. ResistAid is a potent combination of LAG and bioactive flavonoids.

References for the studies cited in this article are available from the author.