Active packaging appeared in the literature of food packaging as far back as the 1960s—not that it was much referred to in the early days under that particular term. During the 1970s, it was often called smart packaging. Even today, active and intelligent packaging concepts are often interchanged even though those of us in the disciplines are cognizant of the profound differences: Intelligent packaging senses change and signals; active packaging senses change and alters its properties to accommodate that change. 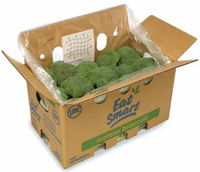 Throughout the current decade, we were repeatedly bombarded by announcements of active packaging entities that could enhance food preservation by imparting some specific functionality to package materials or structures. These capabilities included retaining red meat color, controlling moisture in fresh foods, removing oxygen to retard oxidation, and destroying microorganisms that would spoil or even introduce toxins into foods. We have been regaled with discussions of the wonders of ozone, allyl iso-thiocyanate (AIT), chitosan, silver salts, anhydrides, cobalt-catalyzed oxidizers, glucose oxidase, and many more too numerous to enumerate here. Even a new publication on the topic, Smart Packaging Technologies for Fast Moving Consumer Goods by Joseph Kerry and Paul Butler (Wiley, 2008), suffers from being unable to keep up with the fast-moving and largely unpublished dynamics of active packaging. Even in the Internet age, much of the activity in active packaging remains shrouded in a web of hyperbolized claims, hopes, and mystery. The bottom line is that active packaging has not approached the expectations of last year, last decade, or last century. On the other hand—surprise!—active packaging plays exciting niche roles in a variety of food packaging and will quietly expand and grow.

Active Packaging Segments
It is easy enough to list the most interesting and promising of the contemporary active packaging technologies.

• Flavor Absorbers are usually activated carbon or cyclodextrins designed to remove trivial quantities of undesirable odors, but hardly applied on a commercial basis.

• Flavor emitters include a host of devices engineered to deliver desirable aromas or scents when the package is tweaked such as by opening or twisting closure.

• Ethylene scavengers, which remove gaseous ethylene vapors from the headspaces of respiring fruits and vegetables and thus prolong their chilled shelf lives mostly using the functional potassium permanganate adsorbed on solids in sachets in proximity, are usually relatively ineffective but persistent in the market.

• Carbon dioxide addition functions by incorporating sodium bicarbonate into the package to receive water or excess purge from a meat, poultry, or seafood product. Carbon dioxide can be generated to function as an active antimicrobial and retard the growth of spoilage microorganisms. The latest in the stream is incorporation into the tissue pads for plastic trays of poultry. Coupled with sorbates as a supplementary antimicrobial, carbon dioxide–generating chemicals in packages extend chilled shelf life by one to three days, a significant benefit to retail poultry packers. The supplier of this technology is Paper Pak Industries (www.paperpakindustries.com).

• Temperature-compensating films include Intelimer® polymers from Landec (www.Landec.com), a proprietary polymer technology with side chains that are capable of expanding with temperature increases to allow greater permeability. It is perhaps the only pure active package material structure. Intelimer technology can be provided in a membrane format and thus engineered to allow greater passage of oxygen into packages of fresh produce susceptible to respiratory anaerobiosis—to prevent oxygen extinction in a variety of packaging structures (rigid trays, polypropylene, or polyethylene films, etc.). This technology is currently employed as BreatheWay® membranes over openings in fresh produce packaging by Landec subsidiary Apio Inc.

Antimicrobial Package Materials
A flood of natural and other chemicals have been proposed to counter the growth of spoilage, infectious, and toxin-producing microorganisms that are ubiquitous in and on foods and their environments. Among the older candidates cited above are, of course, silver salts, AIT, and almost all spice and herb extracts. Among the newer entries are chlorine dioxide, sulfur dioxide, hydrolyzed water, nisin and related bacteriocins, etc.

With all of these possibilities, what are the issues that have challenged their commercialization in the United States? Mostly it relates to the reality that the laboratory-measured functionalities are performed under pristine conditions—which never occur in food. The most consequential problem is that microorganisms do not conveniently reside on smooth food surfaces; they are found in deep recesses of food, not reached by most of the antimicrobials or their derivatives. Thus, although these compounds are effective in vitro, when it comes to in vivo—whoops! And even if a safe, wholly functional system is developed, how effective can it be to control the entire spectrum of microorganisms extant on or in food? We can forecast antimicrobial active packaging serving to complement or extend a base preservation system sooner rather than later.

Moisture Controllers
Virtually the first commercial active packaging was silica gel in a porous sachet or mini-canister placed in a hermetically sealed pouch or jar to remove residual water and/or water vapor. Today, these are hardly uncommon for hermetically packaged dry drugs with many months or even years of shelf life. Emerging from the shadows of laboratories and pilot plants are a number of enhanced moisture controllers that carry the concept into newer contexts.

CSP Technologies (www.csptechnologies.com) has developed three-phase polymer technologies in which a barrier layer and a channeled layer are co-extruded into a canister-shaped structure. Within the channeled layer are desiccant particles open to the environmental gas within the closed container containing dry product. Moisture is withdrawn from the package interior before closing, and the dispersed internal desiccant removes any residual water vapor. The package may later be opened by a consumer to remove one unit of the contents. If the package is closed tightly by the consumer, the active desiccant in the container wall can remove any moisture that entered during the brief opening period.

Astute food packaging technologists have extended this multi-phase plastic concept to food packaging by incorporation into the plastic package channels of antimicrobials for the control of Listeria on processed meat surfaces. In the same manner as in other contexts, CSP Technologies has incorporated activated carbon odor controllers, aroma emitters, and persistent oxygen scavengers.

Shelf life of foods high in water content such as fresh or processed meat or bakery goods may be extended by retarding water loss at high relative humidities. Moisture variation from temperature fluctuations in distribution may be regulated by absorbing or desorbing moisture to stabilize the amount to pre-established levels, in effect functioning as a buffer to supply or remove. Multisorb Technologies (www.multisorb.com) has addressed this issue with sachet contents engineered for relative humidities in the 60–90% range.

Oxygen Controllers
Food packaging scientists have been probing means to remove as much oxygen as possible from the interior and exterior of food products and to maintain reduced oxygen conditions. While reduced oxygen in past years meant dropping the levels to a single-digit percentage, that low amount has been demonstrated to be adverse to sensory quality in a wide variety of food products such as beer, processed meats, prepared meals, and dehydrated foods. Thus, the objective has been to decrease oxygen to as low as possible and to maintain those levels applying barrier packaging plus active packaging.

Multisorb Technologies’ and Mitsubishi Gas Chemical’s classic ferrous oxide sachets and labels are the standards but as decreased oxygen levels are sought, both companies and others have developed more-responsive activities. Cryovac is incorporating benzyl acrylate into plastic package films for processed meats; Grace is incorporating ascorbates into bottle closures; Bericap has sulfur dioxide in bottle closure liners; and makers of polyester beer bottles have layered in scavengers to retard passage of air through the walls. It is a rising tide that recognizes that parts per million of oxygen in the contained food significantly reduce shelf life. This has led to systems that integrate removal and barrier with active packaging.

Final Thoughts
Any discussion of active packaging senses increased activity on the developmental and commercial scenes: self-heating in new solid state formats that might actually function in a controlled manner; widgets that appear in Guinness cans if not record books; rosemary as the answer to meat preservation issues; and micro oxygen to achieve the ultimate goal of total practical control over biochemical deterioration. So although active packaging is but aminor factor in food packaging today, its continued permeation into our food packaging is assured to achieve an objective of much prolonged quality and nutritional retention.