Americans are consuming too much sodium, and to help them cut back, the U.S. Food and Drug Administration should establish mandatory federal standards to regulate the amount of salt that food manufacturers and foodservice operators can add to their products. That is the key message in “Strategies to Reduce Sodium Intake in the United States,” a report released last month by the Institute of Medicine (IOM) and available online at http://www.iom.edu.

Current average daily sodium intake is more than 3,400 mg/day—well over the recommended maximum intake level of 2,300 mg/day established in the 2005 Dietary Guidelines for Americans. Consuming less sodium is critical to improving public health, according to the IOM report, because excess sodium intake is strongly linked to hypertension, heart disease, and stroke. (Figure 1 tracks sodium consumption within population segments from 1971 through 2006.) 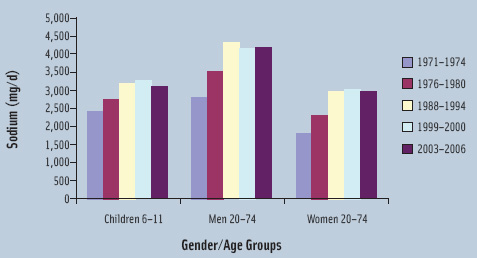 The IOM report recommends that the U.S. Food and Drug Administration (FDA) modify salt’s GRAS (generally recognized as safe) status and establish limits for the amount of sodium that may be used in 11 food categories. Currently, there are no limits on salt’s use as a food additive.

“The justification for modifying the GRAS status of salt is based on changes in the body of evidence for the health effects of salt that have emerged since it was first recognized as GRAS in 1959,” the report states.

“Certainly as we have increased eating food away from home and processed foods at home—the source of about three-quarters of sodium in the diet—overall sodium consumption has increased,” said retired Kraft Senior Vice President and IFT Professional Member John Ruff, who served on the IOM Committee on Strategies to Reduce Sodium Intake.

Ruff explained that members of the committee determined that FDA regulatory action was the best route to achieving a population-wide sodium reduction because neither public education campaigns nor voluntary efforts by the food industry have enabled Americans to kick their salt habit, and there is a large body of evidence supporting the fact that too much of it is not good for us.

Technical Challenges
Of course, cutting back on the amount of salt in food is not a simple proposition, emphasized Roger Clemens, a Professor of Pharmacology at the University of Southern California and spokesperson for IFT. “If it were easy, it would have been resolved 30 years ago,” said Clemens. Salt not only affects the flavor of food, but it also serves as a preservative and plays a role in food safety, Clemens noted. In cheese making, for example, salt plays multiple roles. “It makes milk proteins knit to form curd under acidic conditions, protects other proteins in solution during heat treatment and to reduce microbial contamination, and emulsifies these proteins with other ingredients to provide smooth textures,” said Clemens.

IOM recommends that the FDA take a “step-down” approach in which it establishes moderate sodium-reduction targets for foods and beverages that will still be palatable to consumers. As consumers adjust to the targeted, lower-sodium level—and after research has documented that the change will not produce unintended negative public health consequences —FDA would introduce a new, lower limit for sodium, continuing with this process until overall sodium consumption had reached a level that does not present a public health threat, Ruff explained.

There is ample research documenting the fact that consumers are likely to adapt well to incremental changes in saltiness profiles. “Industry has done many, many studies looking to see how much they can reduce salt, and usually these studies suggested that 5–10% reductions are not noticed by consumers,” said Gary Beauchamp, an IOM Committee Member, IFT Member, and Director of the Monell Chemical Senses Center.

Eventually, with the step-by-step approach, people will not be as likely to crave very salty foods. “Over years, people’s taste preferences should change, and they’ll have a lower desire for salt,” said Beauchamp. “You can then have lower-sodium products that will be highly appreciated.”

Clearly, the process of revamping Americans’ taste preferences and allowing the food industry time to reformulate products to meet the sort of standards IOM has proposed for FDA will not happen overnight. “This is going to take time if it is going to be done right,” said Jane Henney, Chair of the IOM committee and a Professor of Medicine, University of Cincinnati College of Medicine. “It’s not going to be a process that will take weeks or months. This will be a process that will likely take years, hopefully not decades,” she said.

The IOM’s proposals are “somewhat more complicated than most regulatory proposals,” Ruff acknowledged, but added that committee members believe they are warranted given the complexity of the issue. Taking a regulatory approach provides the food industry with “a level playing field,” Ruff said. In the past, he observed, companies that have taken the initiative and introduced reduced-sodium products have frequently lost sales to competitors marketing full-salt products that consumers found more taste-appealing. With sodium limits mandated by product category, no one would be at such a disadvantage, Ruff said. He also noted that the IOM report suggests that at each step down in the process, products that are near the top of the new limits and are likely to fall outside these limits at the next reduction be marketed with front-of- pack disclosures cautioning consumers of their sodium content.

Regulatory Dynamics
An FDA statement released in the wake of IOM’s announcement said the agency is not currently working on regulations to govern the sodium content in food but will review the recommendations and develop plans for working with industry, other federal agencies, and public health and consumer groups on sodium-reduction initiatives. The Dept. of Health and Human Services will establish an interagency working group on sodium to review options and next steps.

Implementing a rule-making approach to sodium reduction would be an arduous task, said Anthony Pavel, an attorney in the Food and Drug Practice of law firm K&L Gates LLP. “Rule-making is not a quick process,” said Pavel, adding that a step-wise system of regulations on sodium reduction could potentially require multiple rule-makings over several years—no small feat because it typically takes two to three years to promulgate even an uncontroversial rule. “Changing the GRAS status of salt will be difficult,” said Pavel. “I don’t think it’s impossible.”

Cautionary Voices
Not everyone has greeted the IOM report warmly; as one might expect, some of the sharpest criticism has come from the Salt Institute, a trade association. “Salt is being demonized, and that is not what the evidence says,” contends Salt Institute Technical Director Morton Satin. Satin cited the results of a large meta-review commissioned by the German Ministry of Health to examine the impact of salt reduction on health. The findings, published in 2009, concluded that population-wide salt reduction was not justified from a public health point of view, Satin said. The Salt Institute is calling for a large-scale blind clinical trial to examine the impact of salt reduction on health outcomes, said Satin. The trial should focus not on a risk factor for disease, such as blood pressure, but on health outcomes—such as a cardiovascular disease, Satin said.

It’s important to put the IOM’s messages on sodium reduction in perspective, said Clemens, noting that there is a definite downside to focusing too much on sodium at the expense of other nutritional issues.

“If the food industry is swayed to the point that this becomes a primary focus, then it will take away valuable research dollars that could be allocated to developing safer, more nutritious foods,” said Clemens. “Nutrition is more than just one nutrient.

“Blood pressure is impacted by a variety of nutrients—magnesium, potassium, and calcium—as well as lifestyle and genetics, of course,” Clemens continued. “It’s more than just sodium. An overall balanced diet is critical for health.”

Consumer Behavior and Perceptions
To date, U.S. consumers have not been enamored with the low-sodium offerings available to them.

Statistics from the market research firm NPD Group show that in 2009, Americans were consuming fewer than 40 servings (or “eatings” as NPD terms it) a year of low-salt/sodium-free products, down from a high of about 84 in 1993 (Figure 2). 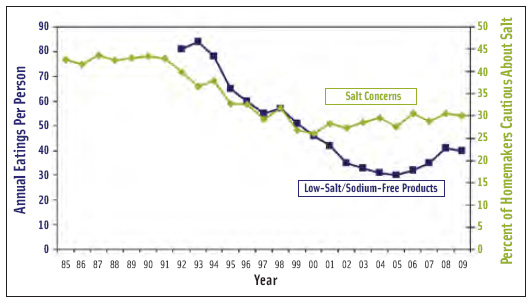 NPD data tracking consumer views about salt consumption from 1985 to 2009 show that concern was substantially higher in the mid-to-late 1980s than it has been in the current decade, although the percentage of consumers with concerns has begun moving up slightly in the past few years.

Former Kraft executive Ruff speculates that consumers’ preoccupation with the need to cut fat, calories, and sugar has made them less interested in sodium-reduced products. “People aren’t aware of the magnitude of the [health] issue, and that has led consumers to be less willing to try these products and certainly less willing to make a trade-off in taste,” he said.

That may be changing. While currently about 30% of consumers believe that they should be cautious about salt consumption, an additional 14% of consumers will share that view by 2018, NPD Group forecasts.

Food Companies Take the Initiative
Many food companies are not waiting for regulatory mandates to spur them to action on sodium reduction. Campbell Soup Co., for example, has been working for years to reduce the sodium content of many of its products, and has achieved reductions of from 25–50% in some offerings. Kraft Foods said earlier this spring that it plans to cut salt in its products sold in North America by an average of 10% over the next two years. And Bumble Bee Foods in April announced the rollout of the first phase of sodium reduction across its full product line, starting with its albacore tuna.

Clemens would like to see even more companies embrace the challenges of lower-sodium product development. “I think it’s a wonderful opportunity for the food industry to rally around and work together on new formulation strategies,” he said. “It’s going to take a lot of work. No other nutrient in the food supply behaves like sodium chloride.”

Ruff, too, sees opportunities for additional product development creativity and the potential to develop a new generation of better-tasting, lower-sodium offerings. “There’s no magic bullet, but there is a lot of information and a lot of techniques available,” he said.