Freezing works as a preservation process by greatly reducing the rate of chemical and biological reactions, because of reduced temperature, and by reducing the mobility of reactants by freezing water into ice. Freezing can also do harm to foods by puncturing cell walls with ice crystals, by concentrating solubles, by causing precipitation of solubles, and by modifying textures due to ice crystals. 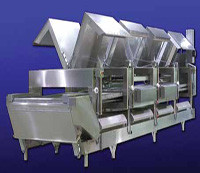 For example, baked goods such as bread and cake are known to stale rapidly in the temperature range of about 40˚F to 100˚F. Staling is a complex condition, but at least one contributor to firming, as staling is also known, is the retrogradation of starch, a type of recrystallization of starch molecules as temperature is lowered. (This is also why it is best not to store bread or cake in a refrigerator.)

It is generally desirable to freeze as quickly as possible because many of the harmful phenomena occur at medium-to-slow rates of temperature change, expressed in degrees/minute. Unfortunately, the most harmful rates are exactly those most easily achieved in commercial freezing equipment.

Various techniques are used to accelerate freezing rates and reduce the harmful effects. In mechanical refrigerators and freezers, cold air is circulated at high velocities to reduce external heat transfer coefficients, using fans. Not much can be done to accelerate internal heat transfer rates. Often, foods to be frozen are formed with thin profiles, such as hamburger patties and slices of chicken breasts, but when larger items are frozen, such as five-gallon tubs of ice cream, it just takes a long time.

Cryogenics
Cryogenics, or the use of very cold liquefied inert gases, accelerates freezing by greatly reducing the temperature and increasing the driving force for heat transfer from food to the cold gas. Both liquid nitrogen (LN2) and liquid carbon dioxide (CO2) are in common use. The choice between one or the other often depends on which is less expensive in a given market. Nitrogen is a byproduct of the separation of oxygen from air, often for use in steelmaking. So, in areas near a steel mill with a basic oxygen furnace, nitrogen may be plentiful and inexpensive.

Carbon dioxide is a by-product of fermentation, is found in natural underground reservoirs, and is a by-product of reforming of natural gas to make hydrogen in oil refining and for ammonia. Whatever its source, carbon dioxide is purified for use in beverages, as an inert blanket over stored vegetable oil, and after liquefaction, for freezing. Pressurized liquid carbon dioxide turns directly to solid dry ice at atmospheric pressure, and the dry ice then sublimes to vapor. Heat is removed as the heat of sublimation, about 256 BTU/lb. In contrast, the heat of vaporization for liquid nitrogen is about 85 BTU/lb, but its boiling point is -195.8˚C (about -320˚F). Almost half the heat removal with liquid nitrogen is as sensible heating of the cold gas, while the gas from carbon dioxide contributes a much smaller fraction of heat removal.

These differences lead to design differences in cryogenic freezers, depending on the gas used. Many cryogenic food freezers are relatively simple conveyor tunnels with metal mesh belts and a clamshell enclosure, which can be opened easily for cleaning. The enclosures are heavily insulated to prevent inefficient use of the refrigerant due to heat leakage from the environment. Carbon dioxide is introduced at the same end as the food as a spray that turns into fine particles of dry ice snow. The dry ice rides with the food and removes heat at essentially a constant temperature of about -109˚F. Cold vapor is exhausted by a fan to the atmosphere. Carbon dioxide is heavier than air and so sinks toward the floor if it is released into the room. This can pose an asphyxiation hazard to workers in the room. Detectors and alarms are usually provided as protection.

Liquid nitrogen is introduced as a fine spray near the food exit of the tunnel and travels as a cold mist of vapor and liquid drops toward the entrance end. Heat removal occurs as the very cold vapor warms up and the liquid vaporizes. There is a little less thermal shock to the food from liquid nitrogen because the food is already cold when it is exposed to the refrigerant.

Cryogenic freezing tends to reduce moisture loss from exposed foods and so has some advantage where foods are sold by weight and are valuable, as is the case with beef patties. Well-designed mechanical freezers can also have low losses. Yield loss is not a major factor when freezing packaged foods. Cryogenic tunnels are less expensive than mechanical freezers because there is no compressor, condenser, or evaporator, the components of a mechanical refrigeration system. On the other hand, the cryogenic gases are usually a more expensive vehicle for purchasing cold than is the electricity used to operate a mechanical system.

Sometimes, industrial gas companies will lease or lend a cryogenic tunnel in return for the gas supply contract. It is not unusual for a new venture to start with cryogenic freezing to reduce initial capital costs and then invest later in a mechanical system to reduce operating costs.

An unusual application of cryogenics that relied on local air liquefaction was observed in a food plant located where electricity costs were very low. Air, which is about 80% nitrogen and 20% oxygen, was liquefied by compression and highly integrated heat exchange and then used in cryogenic freezing without separation. (The essence of gas liquefaction is that boiling points increase with pressure, so if air, nitrogen, or carbon dioxide is compressed enough, it can be condensed by available coolants, such as water. In practice, complex cascades of cold streams are actually used at various stages to minimize the main cost, which is electricity to drive the compressors.) For reasons known only to the owners, that plant was closed.

Spiral Freezers
JBT Food Tech (formerly FMC Food Tech), Sandusky, Ohio, sells two distinct varieties of spiral freezers. The essential concept of spiral configuration is to achieve a high density of freezing belt surface in small volumes, in contrast with a linear conveyor tunnel. Another alternative freezer is a batch blast freezer in which product is typically stacked on pallets while -40˚F air is circulated at high velocity around the stacks. In a batch freezer, space should be left between containers of food to allow the air to circulate, but this reduces the loading, and spacing may need to be adjusted for shipping. A continuous-belt freezer reduces the need for handling and can also freeze faster in many cases.

JBT retains the acquired brands of its various families of equipment. In the case of freezers, these are Frigoscandia and Northfield, according to Jim Ehret, Sales Support Manager (phone 419-627-4330). He describes the differences by referring to the belt design. Northfield uses a supported belt design in which a central drum carries arms on which a wire mesh belt slides. There is practically no limit on how wide or how high a supported spiral can be, so it is well suited for freezing large packages of food.

The Frigoscandia design is called self-supporting and uses a wire mesh belt with metal side walls on which the next tier rests. The stack of circular tiers forms an enclosed annular space through which cold air is blown. In the supported spiral, there are no side walls to direct the air flow. There is also a forest of supporting metal, which can be difficult to clean. Thus, the Northfield design is often chosen for packaged products, which create less of a sanitation challenge than do exposed foods, such as pieces of meat or baked goods.

In the supported spiral, the central drum is rotated by a motor. In the self-supported spiral, the stack is rotated by two shafts driving large gears on the bottom of the stack at the inside and outside edges. The speed is variable, using variable frequency drives on the motors. The refrigeration equipment is inside the stainless steel box, which also has sloped stainless steel floors and drains. The mesh belts are composed of stainless steel wires woven such that they can flex as they travel around the spiral. This means that the components of the belt move under the product and can leave an impression on soft products. To reduce the extent of belt movement, Frigoscandia offers a “tight curve” belt in which the pivot point is in the middle of the belt instead of being at one edge.

Air flow in freezers is normally from the top down, although it is theoretically possible to have spirals that move product down as well as up, in which case air flow might be reversed to maintain counter flow, or it might remain co-current. The technical center in Sandusky is well equipped to test various belts and conditions for specific products.