Modification of grain, vegetable, and fruit crops has been done for centuries through traditional cultivation methods. From early times, farmers would modify crops through careful selection of favored traits and cross-breeding of those selected plants. Today, this traditional technology continues with modern tools that allow the rapid selection of plant lines for hybridization, the rapid detection of desirable traits, and the confirmation of successful plant crosses. In addition, new technologies are emerging that go far beyond traditional agriculture to the genetic modification of crops and creation of bioengineered tools used in food processing and manufacturing. This article will explore the rapid advances in food biotechnology, how these developments are benefitting food production, and what potential risks must be addressed.

The use of applied biotechnology in food production, processing, and manufacturing has rapidly changed over the past 15 years, prompting increased public interest in this emerging field. Although commercially available genetically engineered crops have only been on the market since the mid-1990s, man has used hybridization and positive selection of crops for centuries to select for improved food, feed crops, and animals. This technology is now modernized with molecular biology techniques that allow the transfer of genetic information not only within species but between entirely separate kingdoms of living organisms. 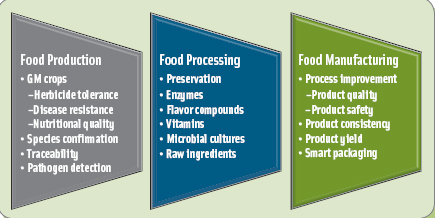 So what is food biotechnology? The Convention on Biological Diversity (CBD) defines biotechnology as “any technological application that uses biological systems, living organisms, or derivatives thereof, to make or modify products or processes for specific use.” In the case of food biotechnology, this refers to the use of biological systems to make or modify food products and processes, in particular. To some, that conjures up visions of genetically modified crops, so-called “frankenfoods,” or uncontrollable weeds. However, to a large number of food scientists, food companies, and related businesses, biotechnology is an established, important, and safe part of the food production pathway. Food biotechnology supports the food supply and food security in three major areas: production, processing, and manufacturing (Figure 1).

Biotechnology and Food Production
Genetically modified (GM) crops, perhaps the most widely known applications of biotechnology, are now found in at least 25 countries around the world. The major GM crops in the United States include soybeans, maize (including corn), cotton, canola, papaya, squash, sugar beets, and alfalfa (for feed). GM versions of these crops are created with specific traits such as herbicide tolerance, disease resistance, shorter maturity cycles, or some combination of these traits (called “stacked traits”). Utilization of GM crops is the most rapidly growing area of food biotechnology, increasing 80-fold in global coverage from 1.7 million hectares in 1996 to more than 134 million hectares (330 million acres) in 2009 (James, 2010). The United States leads the global deployment of GM crops, accounting for almost 48% of the total land area around the world (Figure 2) (USDA, 2010). 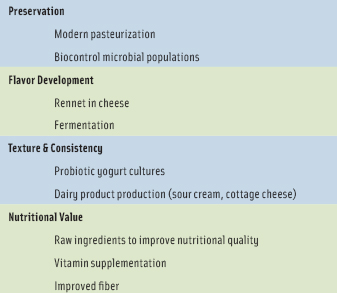 Microbial cultures have been used for hundreds of years as inoculants or “starters” in food processing to enhance sensory aspects of food, including taste, texture, aroma, and consistency. As technology has progressed, these starter cultures have become more clearly defined and engineered to improve the food development process. Although GM microorganisms are not currently incorporated directly into food products, these GM microorganisms are often used for production of food ingredients or food processing applications. Some of the most common food processing applications include fermentation using GM bacteria or yeast (i.e., cheese, yogurt), food additives produced by GM microorganisms, and direct food processing using enzymes, additives, or reagents mass produced from genetically engineered cell cultures. These processes are widely used to make cheese, yogurt, and other dairy products in addition to fermented food products such as beer, bread, and sauerkraut or healthier baking ingredients such as polyunsaturated oils (Table 1). Recently, in addition to traditional flavor compounds derived from agriculture, more than 100 flavor-producing compounds derived from GM organisms have also been identified in food processing and manufacturing as well (Berger, 2009).

Many genetically engineered enzymes and flavor-enhancing compounds have generally been shown to be safe for use in food processing; however, careful monitoring is required for any process-related chemical or product to ensure that the ingredient or chemical has a low risk of inducing food allergies or other health effects. Risk assessment of food biotechnology products (including GM microorganisms and plants) focuses primarily on three major areas: 1) risk of food allergy development; 2) risk of adverse health effects on the consumer; and 3) risk of adverse environmental effects if released into the environment. Clearly defined regulations and oversight coupled with an evidence-based risk approach are necessary to ensure human and environmental health. 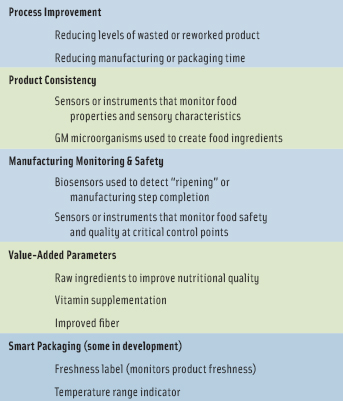 One of the key roles of biotechnology in food manufacturing is the maintenance and improvement of food safety and quality. Prerequisite programs such as current good manufacturing practices (cGMP), sanitation, and environmental monitoring are important foundations of the widely used HACCP food safety system. HACCP (Hazard Analysis Critical Control Point) programs require monitoring and assessment of critical points in the manufacturing process where food products have a higher risk of contamination or compromise. Traditional and new biotechnology applications are available to support and facilitate this monitoring process. Some examples of these biotechnologies are listed in Table 2 and include biosensors for chemicals such as pesticides, antibiotics, or toxins; enzyme-linked immunosorbent assay kits (ELISA) for specific pathogens or allergens; detection of specific genetic markers; and gas chromatography-mass spectrophotometry (GC-MS) assessment of chemical contaminants in addition to field-portable test kits for a range of manufacturing-related target compounds.

Advances in food biotechnology are also leading to the production of real-time product monitoring capacities that can be used to track food product quality through processing, manufacturing, shipping, and storage. These technologies include smart packaging options that are either active or intelligent in nature. Smart packaging refers to food packaging that retains the integrity of the food product, communicates critical changes in the product or package environment, and extends or maximizes the shelf life of the food product. Active food packaging includes components that remove unwanted odor, flavor, or moisture or food breakdown products. Intelligent food packaging labels are those that indicate changes in food freshness, product shelf life, exceedance of storage temperature requirements, or product tampering, among other properties (Table 2) (Butler, 2001).

Current food biotechnology research is focusing on several key concerns for the future: improving nutritional quality of foods, increasing crop yields, reducing product loss during processing and manufacturing, and strengthening global food security. The global population is expected to exceed 9 billion people by the year 2050, and if that prediction is accurate, current global food production will not be sufficient to meet the basic nutritional requirements of the world’s population. Food biotechnology that improves traditional agricultural production methods and supplements those methods with carefully selected biotech solutions is critical to meeting this future demand (FAO, 2010). In addition, food biotechnology advances that reduce the amount of time required to rapidly detect food pathogens and chemical contaminants are also needed.

Recent foodborne illness outbreaks have underscored the need for improved food safety and quality systems around the world in both developed and developing countries. In addition, value-added products, including food with improved nutritional value, food produced via “green” technologies that have less environmental impact, and safer food products, are increasingly in demand by retailers and consumers. Meeting market demand for these value-added features will require expanded food biotechnology applications and food-safety solutions in addition to improved infrastructure in food policy and regulation within developing countries.

The use of biological systems to make or modify food products and processes for a specific purpose is so much more than simply the production of genetically modified food. Food biotechnology is vital to food production, processing, and manufacturing, and it is essential to meeting the nutritional needs of future generations.