Another triumphant event for the entire food packaging discipline and the IFT Food Packaging Division occurred at the IFT Annual Meeting and Expo 2010. Before the opening, proceeding to the exposition floor into the poster sessions, progressing through the formal oral sessions, climaxing with the annual Riester-Davis award ceremonies, and closing the presentation sessions with a set of super presentations that were last in chronological order but probably first in significance, the IFT Food Packaging Division scored repeatedly. 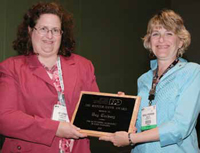 Selecting the most important food packaging developments that were highlighted in Chicago is too challenging, so I chose in random order.

Riester-Davis Award
Kay Cooksey, Cryovac Chair of Food Packaging at Clemson University’s packaging department, won the 2010 Riester-Davis award for outstanding lifetime achievement in food packaging. Named for two of the founders of the IFT Food Packaging Division who were simultaneously pioneers in canning and retort pouch development, the honor is now in its 25th year. In her acceptance speech, Dr. Cooksey recounted her sparkling career beginning with her packaging hall of fame dad, who initiated the packaging program at Indiana State University. Perhaps even more fascinating is the list of Dr. Cooksey’s other later mentors in food and food packaging: Barbara Klein, Phil Nelson, and John Flores. Hardly a trivial point is that, like other Riester-Davis awardees, her early teachers and research advisors were major contributors to her later successes. “Food Packaging deserves more respect as a profession. … Packaging is responsible for reducing waste, helping to maintain product quality and safety and … helping to enhance food safety. … Packaging is not an afterthought in the design process but rather a key step in the overall design of the product.” Dr. Cooksey’s seminal efforts in active antimicrobial packaging are being observed by food industry technologists seeking a silver bullet to triumph over spoilage and pathogenic microorganisms. Her final comment to her colleagues and students was to “enjoy what you do, share your talents, and remain curious.” Congratulations to Dr. Cooksey!

IFT Industrial Achievement Award
A disproportionate number of IFT achievement awards seem to emerge not from the alleged core of food science and technology but rather from the peripheral discipline of packaging—as Dr. Cooksey’s win joyfully reflects. ConAgra was the 2010 award winner for a microwaveable package for frozen dinners. Combining a plastic net basket of sauce with a tray of solids, the package uses microwave energy to generate steam within the fluid and solids and fluid flow to thaw the liquid while thawing and uniformly heating the solid mass to elevate the combined mass to serving temperature within minutes. Holistic technologies (note that both sterilization and pasteurization are accomplished by much the same thought processes in the IFT Research and Development award this year) have been applied to successful commercialization as the marketer cites sales of more than 70 million packages in the first year.

IFT Research and Development Award
Much has been recorded on the microwave sterilization consortium that received the IFT 2010 Research and Development award—all well deserved. In the 1960s Swedish Alfa Laval scientist Lennart Stenstrom conceived, developed, and built a system in which food was sterilized by a combination of 2450 mHz microwave energy, hot water under pressure surrounding the microwave transparent packaged food, and internally generated steam. Multitherm sterilized foods such as potatoes, carrots, and fish were produced and marketed commercially in Sweden. Attempts to transfer the success to the United States were met by bizarre mélanges of skepticism and ignorance of the innovation.

The U.S. Army Natick Soldier Research, Development and Engineering Center (NSRDEC) ventured into the realm of integrating steam pressure and microwave energy, as did several commercial enterprises in Europe with some successes. But it was the consortium of Washington State University (WSU), NSRDEC, and a number of industrial cooperators under the direction of WSU’s Juming Tang that led to the development of microwave sterilization and its cousin microwave pasteurization, both of which promise to deliver safe high quality foods. Deviating from the traditional 2450 mHz microwave energy with its challenges of uniformity of energy distribution throughout the food mass and depth of penetration, the WSU team developed a second generation machine applying 40 kW of 915 mHz microwave energy in a continuous four single-mode cavity system.

Microwave pasteurization is a means to apply greatly reduced heat to significantly reduce the microbiological spoilage load in hermetically sealed packages to extend the refrigerated shelf life of food. Destruction of pathogenic microorganisms is not usually effected, so temperature control during distribution is imperative.

Post-fill sterilization by microwave energy plus other heating sources markedly reduces thermal input and therefore damage to food products. (David Parrott discussed prefill microwave sterilization and aseptic packaging in the July 2010 Food Technology.) The keys to microwave sterilization are to permit entry of microwave radiation to increase the rate of temperature to a level that destroys microbes, food containment under sufficient pressure that permits spore destruction, and pressurized cooling that maintains package integrity. Package structures must be relatively thin (an inch or less) to take advantage of microwave penetration, microwave transparent (this structure from Printpack), and capable of hermetic sealing and package pressure swings. For example, salmon in conventional cylindrical steel cans would require about 72 mins., but in microwave processing, the same salmon would reach 250° F in a total cycle time of less than seven minutes—a 90% thermal input reduction.

The result is not a nonthermal process but sufficiently close for those whose target is preserved meals, main courses, and side dishes, focusing their attention on the process as one key element of a holistic hurdle technology system that can present safe, high quality products. The combination of ethylene vinyl alcohol-based barrier package materials; microoxygen packaging; rapid penetrating radiation and pressurized heating and cooling; and a viable technological and commercial substitute for canned or frozen dinners, pastas, vegetables, fruits, and blends should be immediately evident to food and food-packaging technologists.

Aseptic Processing and Packaging
Coincidentally or by intent, SIG Combibloc (www.sig.biz) announced in July that it was focusing its resources on aseptic packaging of both high and low acid particulate foods in paperboard composite blockshaped packages. U.S. regulatory authorities announced more than five years ago acceptance of some aseptic sterilization of foods containing finite particulates. Coupled with top loading preformed package aseptic packaging systems such as those from from SIG Combibloc, Hassia (www.oyster.hassia.de) deposit/fill/seal, Tersus (www.asepticinnovation.com), and Cryovac (www.cryovac.com), products such as Campbell’s soups, Liebig soups, Knorr soups, and foodservice pouches—all of which consist of liquid and suspended food particulates up to a half inch in dimension—have entered North American and European markets.

Ultraseptics (www.ultraseptics.com) has demonstrated the science behind the validation of continuous thermal sterilization devices that travel through the system and record and/or transmit time-temperature cycles to prove sterilization. Source of heat is not the critical variable since the system can validate indirect heating, steam injection, Ohmic electrical resistance heating, and microwave heating boosted by steam. The measurements have also demonstrated the ability to sterilize particles up to nearly a half inch across in dazzlingly short times.

Thus, commercial application of aseptic processing to sterilize foods with a sizeable amount of solids suspended in fluids has been demonstrated in commercial equipment and accepted by regulatory officials. Safe, high quality foods can be offered in barrier cartons, pouches, cups, and bags in all manner of package sizes and shapes. Among the aseptic processing systems cited by Dr. Simunovic were Spiratube, a tube system capable of sterilizing particulates; Tetra Pak thermal aseptic Visco; and Gold Packaging steam injection. Other commercial sterilization equipment using Ohmic heating technologies for sterilization prior to aseptic packaging are France’s Opal (www.agro-process.com), Italy’s Simaco and Emmepiemme (www.emmepiemme.com), and United States’ Raztek using direct radio frequency. Note that every notation on thermal sterilization in this article—whether aseptic or terminal sterilization or pasteurization—links to another technology such as packaging, barrier or oxygen control, or hermetic sealing. Hurdle holistics are the next major route to ambient temperature shelf-stable distribution or extended chilled shelf life food preservation.

Microoxygen Processing and Packaging
To ensure that the safety and quality of thermally processed and packaged foods are not compromised by biochemical degradation during distribution, removal of trace quantities of oxygen is required. Delivery of Culinologist™-like (as envisioned, implemented, and delivered in a timely manner by a research or other chef) quality of prepared foods depends on the integration of microbiological and enzymatic control with biochemical cessation. This will ensure true ambient temperature shelf stability that, when coupled with the application of low-mass high-barrier package structures, can and will be the future of food and food packaging.