The Dietary Guidelines for Americans—the 2010 version of the musculature of the nutrition policy of the United States—have arrived. The significant investment of time and thought leadership by a highly credentialed group of scientists has again yielded evidence-based, consumer-directed recommendations designed to improve food and fitness patterns and, ultimately, public health. While the Guidelines have evolved since their inception in 1980, the guidance they provide has been consistent and grounded in what most consumers—and stakeholders—acknowledge as a healthy approach to eating patterns.

As with any policy document, it is critical to examine how consumers have responded to the guidance. In the case of the Dietary Guidelines for Americans, it also is time to explore what additional scientific disciplines may be needed to enhance the Guidelines dialogue to meet the needs of all end users, including the food industry, which is charged with bringing these nutrition recommendations to life at point of purchase.

Currently, nutrition science is the core driver of the Dietary Guidelines. However, once the status of the direction driven by the nutrition science is determined, the food must be made, necessitating a key role for food science and technology in the discussion. Take, for example, two key directives of the 2010 Guidelines: increased consumption of fruits and vegetables and reduction in sodium.

The intriguing question around fruits and vegetables is this: If all Americans did reach the goals set in the 2010 Guidelines, would enough produce be available to meet consumer demand? In a study by the Economic Research Service of the U.S. Dept. of Agriculture, based on the 2005 Dietary Guidelines, Buzby et. al. (2006) determined that Americans would need to increase daily fruit consumption by 132% to meet dietary recommendations. The additional demand could require U.S. producers to more than double harvested fruit acreage to 7.6 million acres (up from 3.5 million acres). To meet the dietary recommendations for vegetables, daily consumption would have to increase by about 31%, and the mix of vegetables consumed would have to change, requiring, for example, a 431% increase in the consumption of legumes and a reduction of 35% in the consumption of starchy vegetables. To meet this demand, the areas harvested for vegetables would need to increase by about 137% from 6.5 million acres to 15.3 million acres. Issues of concern in the U.S. include the amount of arable land available with favorable climate conditions, water availability, adequate numbers of farm workers, cold chain management considerations, appropriate means of transportation, and the occurrence of natural disasters that could significantly impact harvest. With all of these considerations, it is likely that imports could continue to increase and new technologies for increasing the capacity to grow and harvest product would have to be seriously exploited. These include vertical farming, hydroponics, and aeroponics, as well as other novel and innovative production methods. 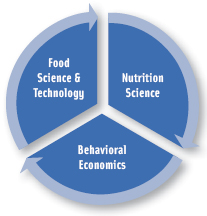 On sodium, the Dietary Guidelines report noted that evidence of a direct relationship between dietary sodium intake and cardiovascular disease in humans has been sparse and that there is further need for randomized clinical trials in humans to indicate a relationship with the impact of dietary sodium intake and other disease states. Still, the ultimate recommendation was to reduce daily sodium intake to less than 2,300 mg/day overall, with further reduction to 1,500 mg/day among persons who are 51 and older and those who are African American or who have hypertension, diabetes, or chronic kidney disease, which applies to about half of the U.S. population. One of the greatest challenges for the food industry—and the food scientists in industry—is to develop nutritious products and identify processes that significantly reduce the sodium while assuring the safety of those products. This reduction will require radical changes in consumer-acceptable sensory qualities of foods, exploration of new, cost-effective technologies to duplicate the functional properties of sodium chloride, and even close examination of food regulations.

With issues like these on the table, why has the role of food science in the Dietary Guidelines Advisory Committee been focused primarily on home food safety issues? Shouldn’t consideration be given to encouraging full engagement of the nutrition and food science disciplines in the examination of how nutrition science recommendations can be realized in the marketplace, posing questions about what technologies are available, how soon they can be employed, and at what cost.

The ultimate question, of course, is what impact have the Dietary Guidelines had on the way consumers approach food choices. Research demonstrates that behavior change does happen, albeit slowly. Why the slow pace? According to Shahram Heshmet of Rensselaer Polytechnic Institute, “Healthy behaviors such as eating habits and exercise have consequences which are realized only after long periods of time. They involve incurring a current cost (sacrifice) in exchange for a chance of some future benefit.” Do the Dietary Guidelines and the communications that surround them offer consumers enough incentive to make fundamental changes in something as routine as food? Ultimately, the true impact of the Dietary Guidelines is consumer buy-in that tracks to improvements in public health. To date, while food science and technology has been given a relatively minor voice in the dialogue, behavioral economics has not been represented in the Guidelines Committee at all—a significant gap given the behavioral changes required to stem the obesity epidemic, overcome nutrient shortfalls, and ultimately identify realistic measures to motivate consumers to adopt sustainable healthier eating patterns.

Some insight on consumer willingness—and ability—to make recommended modifications in diet and exercise patterns is offered by Porter Novelli’s ConsumerStyles database. Since 1995, Porter Novelli has surveyed thousands of U.S. consumers, tracking key health issues (including obesity) and the traction they get over time when it comes to health behaviors. Since 2000, the statement, “My current body weight is a threat to my health,” has been included. In that year, 29% of the total population agreed with the statement, with 71% disagreeing or remaining neutral. Given the sheer abundance of messages and media coverage on the topic of obesity since 2000, one might surmise that these attitudes have significantly changed. Yet in 2010, the responses were identical to those in 2000.

Fundamentally, food isn’t nutritious until it’s eaten. As the nation ramps up to the 2015 Dietary Guidelines review of the science, should the door be open to broader engagement of the scientific disciplines of nutrition, food science and technology, and behavior, putting into practice the adage, “the whole is greater than the sum of its parts?” If not, do we risk advancing nutrition recommendations that cannot be delivered upon in a timely and cost-effective way by the food industry? Similarly, do we risk a decline in consumer relevance and attention? Consumers look at food and nutrition from multiple perspectives. Shouldn’t the Dietary Guidelines do the same?