It typically hits me around 3 p.m. and 8:30 p.m.: That feeling of being hungry and wanting to eat something to satisfy it. Although it may affect people at different times throughout the day, reducing or satisfying those hunger pains is a common concern for those either trying to lose weight or maintain a certain weight. 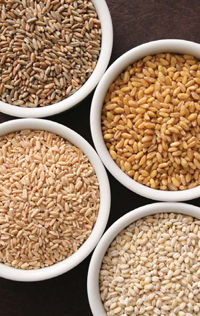 Satiety, or the feeling of being full, is a hot topic addressed by the food industry in recent years. This is evident in the variety of ingredients that are reported to impart a feeling of fullness, leading to reduced food intake. Here is a look at some of these satiety-inducing ingredients.

Whole Grains
Slavin (2004) reviewed studies on whole grains and their benefits in prevention of cardiovascular disease, cancer, diabetes, and obesity. According to the research, the high-volume, low-energy density and the relatively lower palatability of whole-grain foods may promote satiation. Grains rich in viscous soluble fibers, e.g., oats and barley, tend to increase intraluminal viscosity, prolong gastric emptying time, and slow nutrient absorption in the small intestine.

• Rye. Isaksson et al. (2009) reported that eating rye at breakfast suppressed appetite over the next few hours much better than wheat. They gave 16 subjects bread that contained varying levels of rye, but with the same caloric value, for breakfast. Those who ate the bread with the highest level of rye reported a lowered desire to eat in the hours between breakfast and lunch, while those who ate bread with wheat flour felt hungrier earlier. The researchers concluded that the consumption of rye, whether through pure rye bran or sifted rye flour, created a feeling of satiety unmatched by wheat.

• Corn. Research presented at the 2010 Annual Scientific Meeting of the Obesity Society demonstrated that eating low-fat popcorn as a daily snack curbed hunger (ConAgra, 2010). Conducted by James Rippe of the Rippe Lifestyle Institute and supported by ConAgra Foods Inc., Omaha, Neb. (phone 800-243-0303, www.conagrafoods.com), the study showed that subjects who consumed a 100-calorie portion of Orville Redenbacher’s 94% fat-free SmartPop!® butter or kettle corn varieties daily for 12 weeks, as part of a reduced-calorie diet with moderate cardiovascular exercise, lost an average of 13 pounds, reduced waist circumference two inches, lowered body mass index two points, and reduced body fat by 2%. At the end of the study, 94% of the subjects said that consuming the 100-calorie snack of 100% whole-grain popcorn every day during the testing period helped satisfy hunger.

Fiber
Willis et al. (2009) indicated that not all fibers influence satiety equally. The researchers studied the effects of fiber on 20 healthy men and women in an acute, randomized double-blind, crossover study. The subjects, all of whom fasted, consumed either a low-fiber muffin (1.6 g of fiber) or one of four high-fiber muffins (8.0–9.6 g of fiber) for breakfast during five separate testing sessions. The subjects rated satiety at baseline and at regular intervals for 180 minutes after they consumed the muffins. Satiety ratings differed among treatments, with resistant starch and corn bran having the most impact on satiety.

• Resistant starch. The reported weight management benefits of resistant starch are highlighted in two popular cookbooks: The Carb Lovers Diet from Health magazine (www.carblovers.com) and The Skinny Carbs Diet from Prevention magazine (www.skinnycarbsdietbook.com). Multiple published studies show the positive effects that Hi-maize® resistant starch from National Starch Food Innovation, Bridgewater, N.J. (phone 800-743-6343, www.foodinnovation.com), has on satiety, including both long-term and short-term benefits not found in typical dietary fibers. Derived from high-amylose corn, it resists digestion in the small intestine and behaves as a dietary fiber in the large intestine.

• Oligosaccharides. Minimally digestible carbohydrates and oligosaccharides typically have slower gut transit rates and reduced absorption, leading to slower rates of gastric emptying, which imparts a feeling of fullness. According to information from FrieslandCampina Domo, Paramus, N.J. (phone 201-655-7786, www.vivinalgos.com, www.frieslandcampina.com), emerging research shows that other physiological mechanisms associated with prebiotic oligosaccharides may affect satiety. Vivinal® GOS is highly fermentable by probiotic colonic bacteria and produces short-chain fatty acids in the large intestine. Animal studies showed that the production of short-chain fatty acids through fermentation of the prebiotic appeared to induce an increase in blood levels of the satiety hormone, peptide YY (PYY). There was also increased expression of another satiety hormone, glucagon-like peptide1 (GLP1), in the colonic epithelial mucosa.

• Oat fiber. At the 2011 Natural Products Expo West in Anaheim, Calif., Biovelop AB, Kimstad, Sweden (phone +46-42-341-230, www.promoat.com), showcased its recently launched ingredient, PromOat™, a beta-glucan-rich, soluble fiber derived from oats, in cookies, parfaits, smoothies, and shakes. The company is currently conducting its own clinical trials to determine the satiety benefits of the ingredient.

Proteins
Consumer research conducted by Solae, St., Louis, Mo. (phone 800-325-7108, www.solae.com), indicates that today’s consumer understands the important role protein plays in helping to manage hunger (Solae, 2010). The study of consumers from 11 countries sought to better understand consumers’ behaviors, motivations, and practices in managing weight and their usage of foods that provide weight management benefits. The results showed that consumers are most interested in satiety-enhanced versions of “everyday” foods that they already consume regularly. While the results varied slightly by country, consumers consistently ranked soup, yogurt, and breakfast cereal as categories where added satiety benefits would be of interest. At least three-quarters (78%) or more of consumers across all of the countries rated protein’s ability to sustain energy levels and control hunger as very or somewhat important to them.

• Soy protein. Animal studies have shown that soy protein suppresses appetite, in part, by stimulating the release of cholecystokinin (CCK), a hormone that plays a role in appetite control (Solae, 2009). In addition, Cope et al. (2008) suggested that soy-foods are as good as other protein sources for promoting weight loss.

• Whey protein. Whey protein, a complete protein containing all of the essential amino acids required by the body, stimulates several gastrointestinal hormones that are thought to regulate appetite control in the brain. The Dairy Research Institute™, which manages pre-competitive dairy research in nutrition, products, and sustainability on behalf of the Innovation Center for U.S. Dairy and the National Dairy Council®, has focused many of its resources on research related to the connection between dairy consumption and healthy weight, including the role of dairy protein.

Lipid-based Ingredients
A patented oil-in-water emulsion, Fabuless™ (formerly Olibra), from DSM Nutritional Products, Parsippany, N.Y. (phone 800-526-0189, www.dsm.com), is said to trigger the natural appetite control mechanism. Fabuless™ fine oil droplets are made from naturally occurring dietary lipids—palm oil coated with galactolipids from oat oil. The microstructure is thought to delay the digestion of the core palm oil droplets in the stomach and small intestine. The droplets pass relatively undisturbed through the first part of the digestive tract into the latter part of the small intestine, the ileum. Undigested fat in the ileum is recognized as a signal that the body is satisfied. According to DSM, nine independent studies (short-, medium-, and long-term as well as mechanism of action) have been performed at universities and specialized centers throughout Europe. The studies consistently substantiate the ingredient’s effect on reducing calorie intake. They showed a reduction in caloric intake at subsequent meals between 12.5% and 29%. The effect has been shown to last for more than eight hours. All studies have been published.

Phase 1 Hunger Controller™ from Pharmachem Laboratories Inc., Kearny, N.J. (phone 800-526-0609, www.pharmachemlabs.com), is a portfolio of flavored beverage powders for controlling appetite and weight. The ingredient line features Olibra™, an emulsion of palm and oat oils, and other specialty ingredients. Phase 1 Hunger Controller is part of Pharmachem’s proprietary weight management ingredient system called The Three Phases of Weight Control. Diepvens et al. (2007) showed that consumption of Olibra yogurt by 50 overweight women who had recently lost weight improved weight maintenance compared to a placebo. They attributed this to the relatively higher resting energy expenditure as a function of fat-free mass, relatively higher decrease in fat mass, and relatively lower increase in hunger.

Lipid Nutrition, Channahon, Ill. (phone 815-730-5244, www.lipidnutrition.com), offers PinnoThin™, an appetite suppressant that stimulates the release of the hunger-suppressing hormone CCK and may help to increase the release of GLP1, which not only helps the body digest fats better but also sends a “full” feeling to the brain. The ingredient contains pine nut oil derived from Korean pine nuts. The company tested PinnoThin™ in two randomized double blind crossover trials. The first study showed that within 30–60 minutes after taking a 3 g dose of the ingredient in the form of oil or its natural metabolites, the release of CCK was significantly increased in the blood of the test subjects, compared to those who had taken a placebo. The natural metabolites of PinnoThin also significantly increased the release of GLP1 in the blood. In the second study, subjects given the ingredient showed a 9% reduction in food intake and a 7% reduction in caloric intake.

Almonds
An ounce of almonds contains 6 g of protein. Almonds are considered a good fit with many popular weight-loss plans such as Weight Watchers, the Mediterranean Diet, and the South Beach Diet. Cassady et al. (2009) showed that chewing almonds slowly can affect satiety, as well as affect nutrient absorption. In a randomized, 3-arm, crossover study, 13 healthy adults chewed 55 g of almonds 10, 25, or 40 times. Blood was collected and appetite was monitored for the following three hours. Over the next four days, all foods were provided, including 55 g of almonds, which were consumed under the same chewing conditions. Hunger was acutely suppressed below baseline, and fullness was elevated above baseline longer after 40 chews than after 25 chews. Two hours after consumption, fullness levels were significantly lower and hunger levels were significantly higher after 25 chews than after 10 and 40 chews.