Why, you might inquire, does this columnist persist in chronicling so much of what has gone before when, as the youth of our profession insist, the past is history and therefore inconsequential? My answer is this: If you do not know where you were, you are destined to revisit it (with no apologies to Santayana.) 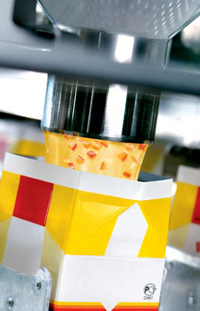 Aseptic is a word expressing independent sterilization of food and packaging and integration in a sterile environment to produce packaged products capable of safe distribution at ambient temperatures. Sterility describes the statistical absence of microorganisms for either high acid (pH<4.6) products such as fruit or low acid (pH>4.5) products such as soups and sauces, with the attendant issues of thermally resistant pathogenic spores. The rationale for sterilization outside of the package is to be able to heat thin films of fluid foods very rapidly and thus markedly reduce the heat required to achieve the sterile condition and so to produce a product of much higher quality than with what is now mainstream terminal thermal sterilization.

Sterilization external to the package is called aseptic and etymologically is not packaging. But, in our context, it is integral to the total system and so is indispensable and cannot be separated. Simultaneously—or perhaps not, in some “re-sterilized” instances—the package is exposed to a system that destroys microorganisms—a chemical such as hydrogen peroxide; acidified water for high acid foods; ionizing radiation such as gamma or beta rays; or even thermal energy. Maintaining the sterile conditions, the two entities are assembled in an environment that is sterile because it has been previously sterilized as, for example, by steam, and maintained under sterile conditions, often by enclosure plus positive pressure of sterile air. The product is filled into the previously sterilized package structure—paperboard composite carton, barrier plastic cup or bowl, or multilayer barrier pouch—and hermetically sealed. The sterile product/package integer exits the system for ambient temperature distribution or—for better biochemical quality—refrigerated distribution.

Aseptic Processing
• Indirect Heating. With acknowledgement to a recent media piece from Michael Campbell, Pick Heaters (www.pickheaters.com), and input from the world’s leading aseptic systems purveyor, Tetra Pak (www.tetrapak.com), the elements of processing may be summarized as follows. Conventional technologies for ultra high temperature (UHT) sterilization of foods include indirect heating such as plate (and frame) heat exchangers; tubular type such as shell and tube; and scraped surface.

All are engineered to sequentially heat the product to specified time-temperature conditions and then cool the product rapidly to retard further thermal damage and allow “cold filling.” Particulates, especially those that are larger in size (>9 mm), are vulnerable to overcooking during prolonged exposure on indirectly heated surfaces engineered with high temperature steam on the opposite side designed to input enough energy to destroy microbiological spores (for low acid foods). The small distances between plates of plate and frame heat exchangers effectively preclude heating of foods containing solid pieces. Tubular heat exchangers permit more uniform heating, but heating surface burn-on is possible because of the larger surface area required to transfer heat to achieve sterility. Triple tube-in-tube technology appears to be more commonly applied for smaller particulate foods. Progressive cavity pumps are employed to move product to minimize physical damage to particulates.

In scraped surface heat exchangers, the product is pumped through jacketed tubes in which a series of tightly fitting longitudinal blades are constantly moving product from the outer heated or chilled walls to the interior of the tube for more uniform heating and to minimize the probability of burn-on. Foods with larger particle size (>12 mm) are more typically treated in scraped surface units coupled with air-actuated piston pumps in order to maintain particulate integrity.

Generally, indirect heating has been employed to sterilize foods that contain small particulates (i.e., baby foods, jams and preserves, and some soups).

• Direct Heating—Steam Infusion. Direct heating means that culinary (i.e., sterile) steam is entered into the moving fluid base food product to reach the requisite temperature throughout the heterogeneous food. In direct heating, the pressure of the heating medium, i.e., steam, and the restrictions of nozzles, can damage the particulate integrity, and so is not usually applied in this food category. In steam infusion, the fluid product stream is pumped at a higher pressure through a distribution nozzle into a chamber filled with steam that has been sterilized by virtue of wet temperature.

Steam infusion achieves virtually instantaneous heating (and cooling from vacuum evaporation), no burn on, and the ability to heat and cool viscous and particulate-containing foods—but in a large chamber.

• Direct Heating—Steam Injection. In direct steam injection, the high pressure steam is blended with the food stream to elevate the temperature by absorption of the steam energy in what is, in effect, a small tube through which both the steam and food move. Steam injection systems have small mixing chambers, can achieve the requisite temperatures in small particulates, and can move a large volume of food product.

SIG Combibloc
The major purveyor of aseptic packaging for particulates is SIG Combibloc (www.sig.biz) with its “drinksplus” system. Products can include liquid dairy plus up to 10% fruit particulates of up to 8 mm (fibers) 6 mm (cubes).

• Single Heat Treatment. In the basic system, the liquid and the particulate components are mixed and then heat treated in a tubular heat exchanger such as the Varitube® in which the product blend is introduced in more than one straight internal tube surrounded by steam in a jacket. In GEA-TDS’s (www.GEA-TDS.com) P model, counterflow of heated fluid food product in the jacket is a more thermodynamically efficient system, while in their HS model, the internal tubes are curved to add heat transfer surface. In the SK model, product is introduced in a number of parallel internal tubes with a special cone fitted to the tube base plate of the tube bundle to force the product against the tube bundle. This is especially suited for particulate-containing fluid foods.

Single heat treatment is engineered for viscous products such as smoothies to more evenly distribute the food bits, for later filling in the SIG Combibloc aseptic packaging machine.

• Separate Heat Treatment. In this type of system, the solids and the liquids of lower viscosity are heat treated independently of one another. One option calls for liquid processing by indirect or direct heat exchanger while the supplier of solid bits delivers aseptically processed food in a carrier liquid in mobile aseptic barrels docked at the filler. The two components are blended in an aseptic mixing station immediately before the aseptic filling. A second option uses two heat exchangers in which the products are also independently processed and mixed prior to holding in an aseptic tank containing a paddle-type agitator preceding filling. Some aseptic packaging systems fill the two phases separately.

Ultraseptics
Derived from extensive research conducted at North Carolina State University, Ultraseptics (www.ultraspetics.com) thermal processing for aseptic filling is not quite in prime time commercial practice, but is based on scientifically sound experimentation on a wide variety of low acid large particulate size vegetables.

Aseptic Packaging
Transfer of the sterile particulate-containing product into the sterile package has been a challenge and, to date, has required the use of an open-top empty sterile package such as a carton, cup, tub, bowl, or pouch that is immediately hermetically heat sealed under sterile conditions after filling. SIG Combibloc’s paperboard composite carton arrives at the packaging machine as a knocked-down sleeve that is erected inside the enclosed machine before the sterile section. The open-top carton is treated with hot hydrogen peroxide to sterilize the carton interior surfaces.

Residual chemical is thermally evaporated, an operation that also enhances the sterilization process. At the next station on this horizontal form/fill/seal machine, mixed product is filled. Closing brings together the carton lips and applies ultrasonic energy to hermetically heat fuse the sterile interior surfaces. Exit of the sealed carton is through a narrow slit under positive pressure of sterile air.

Aseptic filling of cups, bowls, and tubs (and some laminated paperboard cartons) is analogous to that for cartons but could also be accomplished using a two-phase process—one for liquid and the other for the solid particles.

A vigorous competition is now in progress to offer retail and foodservice consumers optimally heated semi-solid foods, with today’s options including extended chilled shelf life, microwave sterilized, retort pouch or tray, and aseptic particulate. Not yet and perhaps never technologically interchangeable, each has advantages technically and economically. All of the formats are sufficiently close in final results as to warrant in-depth examination for applications, with the target consumer being the ultimate arbiter.