Freeze concentration is an overlooked technology for separating pure water from various mixtures including milk, fruit juices, vinegar, wine, and wastewater. Some people have inadvertently experienced the process when liquids freeze in an over-chilled refrigerator or while held outside in the winter. 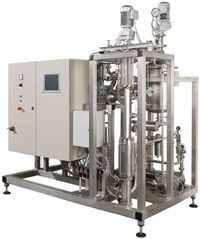 When the temperature of an aqueous solution is reduced below the freezing point of water (32°F or 0°C), pure ice crystals form, leaving behind the dissolved solids. The process is mass transfer controlled because, as the residual solution increases in concentration, it forms a barrier to diffusion of water molecules to the growing ice surface. In addition, the concentrated solution typically increases in viscosity.

A major disadvantage of evaporation using heat is that other volatile solutes are also removed, including flavors. Some flavors and nutrients are damaged by heat. For example, most people can tell the difference in taste between fresh citrus juice and juice that is reconstituted from concentrate.

In the case of wastewaters, volatiles may contribute to air pollution as volatile organic carbon (VOC), which can increase ozone and odors or can actually be hazardous in the special case of wastes from manufacturing munitions.

Freeze concentration is the reason icebergs are pure water in the midst of the salty ocean. The same principle can be used to generate pure water as an alternative to flash distillation (evaporation) from sea water.

Vinegar is often concentrated by freezing to retain volatile flavors. Ice wine is likewise fortified by concentrating alcohol while freezing out water. Both of these processes were often performed simply by leaving barrels outside in the winter. Because ice is less dense than water, it floats on the concentrated liquid and is easy to remove. Hard cider is made into flavorful apple jack the same way. John Chapman, better known as Johnny Appleseed, bought land and planted apple orchards throughout the West in pioneer times for exactly this purpose, according to Michael Pollan in The Botany of Desire.

Freeze concentration followed by vacuum evaporation can increase milk solids to 45% with little impact on flavor, according to research published from the U.S. Dept. of Agriculture Eastern Regional Research Center (Dickey et al., 1995.)

The researchers used a vacuum to rapidly chill the feed, causing the formation of ice crystals that were then removed by filtration through a screen. The vacuum was created by condensing the evaporated water vapor.

The focus may be on recovery of the solids, on purifying water, or on both objectives. In any case, a clean separation is essential. Typically, the larger the ice crystals, the better the separation because large ice crystals have a smaller surface to volume ratio. (Surface area to volume ratio for a sphere = 3/r, where r is radius.) The surface area is where the concentrate clings. On the other hand, the higher the area, the greater the potential mass transfer rate. This creates the engineering dilemma: how to remove heat rapidly, grow a large mass of ice quickly, and yet be able to separate the ice from the concentrate.

There are various solutions. As previously described, ice crystals can be formed by direct evaporative cooling. They can also be formed by indirect heat removal, through scraped surface heat exchangers (SSHE), or through tubes. If cooling is rapid, small crystals are formed, and the reverse is true—slow cooling can grow large crystals. (Think icebergs!)

Ice crystal growth requires supercooling, which is unstable, and nuclei, which are microscopic particles that initiate precipitation from the supercooled solution. Because of freezing point depression by dissolved solids, the freezing point of a solution is below that of pure water and decreases as water is removed and the solids become more concentrated so in a freeze concentration process the refrigeration system must be able to reach temperatures well below 0°C. The lower limit is the eutectic temperature of the solution, which is the temperature at which the concentrated solution begins to solidify. For example, a 78% by volume alcohol solution freezes at -51°C.

Commercial freeze concentration systems incorporate a ripening step in which freshly formed ice slurry is held at constant temperature while being agitated. Several phenomena occur. The agitation helps remove the film of concentrate on all the crystals. Small crystals preferentially redissolve while large crystals grow because there is a thermodynamic impetus to reduce interfacial area. Balancing residence time, temperature, and agitation rate requires empirical testing for any specific solution.

After sufficient ripening or recrystallization, the ice slurry can be separated by filtration, centrifugation, or in a wash column. Centrifugation is relatively expensive and so is rarely used. Filtration is limited by pressure drop through the filter cake of ice. It is necessary to displace concentrated solution from the interstices of the cake by melting some ice for washing.

A wash column offers a continuous separation in which a slurry of ice and concentrate is introduced to the bottom of a vertical column. At the top, ice is melted and the pure water flows downward. In a transparent glass or plastic column, the interface is clearly seen and is maintained just above a withdrawal port for the concentrate. Pure water can be withdrawn near the top, just below where the ice is melted.

This limitation may not apply when pure water is the desired product, but, again, membrane separation (reverse osmosis) may be competitive and uses less complex equipment. Freeze concentration requires some skill to operate efficiently because of the empirical character of ripening and washing. These steps need to be tailored to the particular feed and can be sensitive to fluctuations in feed concentration and flow rate. Such fluctuations will occur with wastewater and may occur with other materials, including seasonal juices, coffee, milk, beer, and vinegar. Stabilizing feed flow rate with a surge tank is one partial solution.

There may be some resistance to a process that involves refrigeration in times of high energy costs and turmoil among refrigerant suppliers because of concerns over greenhouse gases. Most freeze concentrators are too small to use ammonia and so must use chemical refrigerants.

More problematic is automating control of ripening and washing because online sensors for crystal size and solids concentration are not as reliable as would be desired. Relatively little research has been done in the area of freeze concentration. In one case, measurement of the viscosity of concentrated sugar solutions at sub-zero °C temperatures required collecting data on a timescale of days and weeks using a falling ball viscometer in a walk-in freezer. Companies attempting to offer commercial systems have ceased operation for lack of demand. Perhaps, as interest grows in processing vegetables, there will be renewed attention paid to what is potentially a versatile and efficient separation process.