What Is Dietary Fiber?
According to AACC International, dietary fiber is the edible parts of plants or analogous carbohydrates that are resistant to digestion and absorption in the human small intestine with complete or partial fermentation in the large intestine. It includes polysaccharides, oligosaccharides, lignin, and associated plant substances. A number of definitions of dietary fiber have been published over the years, and the most recent is the definition adopted by the Codex Alimentarius Commission in June 2009. It includes three categories of carbohydrate polymers that are not hydrolyzed by enzymes in the small intestine but leaves the decision of whether carbohydrates with three to nine degrees of polymerization (DP) should be included in the definition up to the discretion of national authorities. 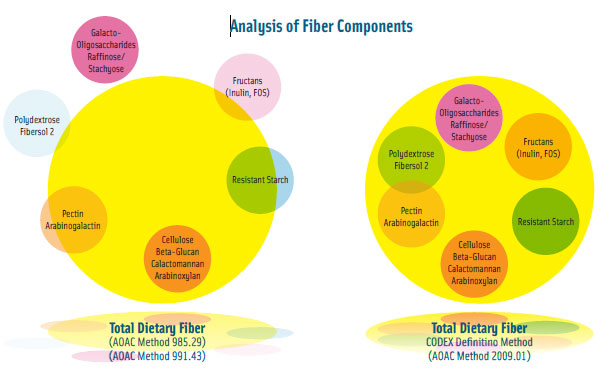 Specifically, Codex defines dietary fiber as carbohydrate polymers  with ten or more monomeric units, which are not hydrolyzed by the endogenous enzymes in the small intestine of humans and belonging to the following categories:
• Edible carbohydrate polymers naturally occurring in the food as consumed;

• Carbohydrate polymers, which have been obtained from food raw material by physical, enzymatic, or chemical means and which have been shown to have a physiological effect of benefit to health as demonstrated by generally accepted scientific evidence to competent authorities;

• Synthetic carbohydrate polymers that have been shown to have a physiological effect of benefit to health as demonstrated by generally accepted scientific evidence to competent authorities.

Traditionally Used Analytical Methods
AOAC International and AACC International both establish methods of analysis that are adopted or approved after rigorous collaborative studies worldwide. For dietary fiber analysis, both organizations’ methods are similar or essentially identical. The following methods have been traditionally used to measure dietary fiber:

AOAC 985.29/AACC 32-05 (“Total Dietary Fiber in Foods, Enzymatic-Gravimetric Method”) measures total dietary fiber using phosphate buffer systems. Duplicate portions of sample of dried (defatted if necessary) foods are gelatinized and partially digested with alpha-amylase and then enzymatically digested with protease and amyloglucosidase to remove the protein and starch present in the sample, simulating human digestion. Ethanol is added to precipitate the soluble dietary fiber. The residue is then filtered and washed with ethanol and acetone, then dried, and weighed. One portion of the sample is analyzed for protein and the other is ashed. Total dietary fiber is calculated as the weight of the residue minus the weight of the protein and ash, reported as a percentage of the original sample weight.

AOAC 991.43/AACC 32-07 (“Total, Soluble, and Insoluble Dietary Fiber in Foods”) measures total, soluble, and insoluble dietary fiber contents (TDF, SDF, and IDF, respectively) of a sample, using an MES-Tris buffer. The sample is defatted and dispersed in buffer, the starch is gelatinized and partially digested with alpha-amylase, and then further digested with protease and amyloglucosidase enzymes. The undigested IDF mass is removed by filtration, dried, and weighed. Ethanol is added to the filtrate to precipitate the soluble dietary fiber. The undigested SDF mass is isolated, dried, and weighed. (If TDF is desired directly, without quantitation of IDF and SDF, the IDF filtration step is omitted). Protein and ash are determined on the residue, whether for TDF, IDF, or SDF, and a correction applied to the residue weight. Dietary fiber is calculated as the weight of the residue minus the weight of the protein and ash, reported as a percentage of the original sample weight.

If the sample contains inulin, fructooligosaccharides, modified starches, or dextrins that resist digestion, an improper amount of the digestion-resistant mass will be captured in the precipitate, so additional procedures are needed to determine these components.

AOAC 2001.03/AACC 32-41 (“Dietary Fiber Containing Supplemented Resistant Maltodextrin (RMD)”) determines TDF, SDF, IDF, and digestion-resistant oligosaccharides. Samples are first run by AOAC 985.29, and the final filtrate solution is collected after filtering off the precipitated dietary fiber. Resistant oligosaccharides are dissolved in the alcoholic solution. To quantitate them, the filtrate is evaporated to 20 mL; deionized through a series of anion and cation exchange columns to remove interferences from buffers, salts, amino acids, peptides, and protein; and then reconcentrated to 10 mL and filtered. Size-exclusion high-pressure liquid chromatography (HPLC) separates the components by molecular weight. The peaks corresponding to oligosaccharides larger than two degrees of polymerization represent the resistant oligosaccharides to be included in the dietary fiber quantity.

Newer Method Meets Codex Definition
The previous methods have traditionally been used to analyze TDF for nutrition labeling purposes. However, these methods either underestimate or don’t measure some components of dietary fibers such as resistant starches and the nondigestible oligosaccharides fructooligosaccharide, galactooligosaccharide, polydextrose, and resistant maltodextrin.

According to Jonathan W. DeVries, Senior Technical Manager at Medallion Laboratories, the traditional methods for determining total dietary fiber quantitate most of the dietary fiber in foods; however, as additional sources of dietary fiber such as inulin became available as ingredients for foods, additional specialized methods were developed and adopted. As the science evolved and more specialty fibers were being added to foods, he said, the need for an updated method for TDF to include all components became apparent.

To simplify the determination of TDF in foods and food ingredients, AOAC International and AACC International worked together to develop a procedure that measures all compounds included in the Codex definition of dietary fiber. A collaborative study on the resulting procedure was conducted with 22 laboratories around the world, and the method was adopted by AOAC in October 2009 as AOAC Official Method 2009.01 and by AACC in March 2010 as AACC Approved Method 32-45.01. 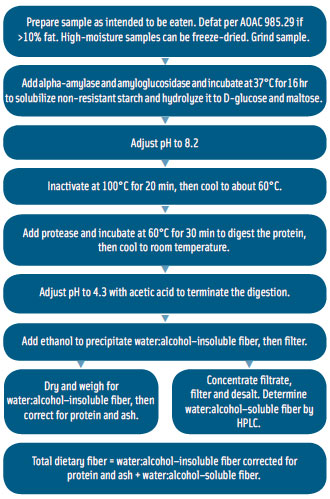 According to DeVries, the new method offers benefits over the traditionally used methods. It more closely simulates what happens in the human digestive system. The traditional analytical methods digest the sample with an enzyme at temperatures near the boiling point of water for 20 min, he said, but the new method digests samples by a mammalian pancreatic alpha-amylase near human body temperature for 16 hr. As a result, a small amount of resistant starches and other fibers that were degraded or lost in the older method is now recovered.

The method also lessens the need to run the traditional dietary fiber method AOAC 991.43 and separate methods for resistant oligosaccharides, DeVries said, including maltodextrins (AOAC 2001.03), fructans (inulin and fructooligosaccharides (AOAC 997.08)), polydextrose (AOAC 2000.11), galactooligosaccharides (AOAC 2001.02), and resistant starch (AOAC 2002.02). These methods are still available for those wishing to understand the component makeup of their samples and for tracking product formulations. DeVries noted that AOAC 2009.01 only measures TDF and that a collaborative study for also quantifying IDF and SDF has recently been completed. He added that approval and acceptance by AOAC and AACC is expected soon.

To bring Canada’s regulations up to date with international definitions of dietary fiber, Health Canada on December 9, 2010, proposed to revise its definition of dietary fiber that had been in place since the mid-1980s. It stated that AOAC 2009.01 represents the best analytical approach since it measures TDF, including resistant starch and nondigestible oligosaccharides, and eliminates potential issues of double counting when a carbohydrate fraction is partially or completely measured by a combination of specific methods. The deadline for comments was February 7, 2011. Health Canada expects to finalize the definition this summer and will post the new fiber policy on its website (www.hc-sc.gc.ca).

Instruments and Kits Offered
A number of companies offer instruments and kits for analysis of dietary fiber. Here are some of them:

Foss (www.foss.us) offers its Fibertec™ 1023 (E) Dietary Fiber Analysis System, which determines TDF by AOAC 985.29 and IDF and SDF by AOAC 991.43. It can also be used for determination of the water:alcohol-insoluble dietary fiber and resistant starch according to the new Codex definition by AOAC 2009.01, but the water:alcohol-soluble dietary fiber would have to be determined by HPLC in the filtrates that can be collected individually. The semiautomated incubation and separation system provides quantitative determination of TDF as well as IDF and SDF separately. It can also be used in sample preparation for detailed studies of fiber fractions by chromatographic or colorimetric techniques. The basic system includes a shaking water bath and a filtration module. Foss also offers a webinar, “Dietary Fiber—Codex Definition and Methods of Analysis,” by Jürgen Möller (available at www.foss.dk/webinars/ca/Dietary%20Fibre/index.html).

Ankom Technology (www.ankom.com) recently announced that it has automated AOAC 991.43 for determination of TDF as well as SDF and IDF individually. The company has been developing/designing the automated instrument for about four years. The instrument may be adapted to run other methods in the future. The company is also working to automate AOAC 2002.02 for resistant starch.

The instrument will also allow the user to bypass capturing the IDF fraction and just capture TDF. In other words, the user will have the choice of determining IDF and SDF and then calculating TDF, or capturing both IDF and SDF in a single filtration after precipitating with ethanol. Once the process is complete, the user will still have to perform both the Kjeldahl protein and ash steps separately, but nothing unusual is added to that process. In all, the user will be able to process 18 or more samples in 60 min. The system will also capture the end process filtrate (after the SDF) for further tests that may be desired. The instrument is undergoing beta testing and delivery of production models is expected to begin in October or November 2011.

Megazyme International Ireland Ltd. (www.megazyme.com) offers a TDF assay kit based on AOAC 2009.01, including determination of resistant starch and nondigestible oligosaccharides. The kit provides for 100 determinations.

Sigma-Aldrich (www.sigmaaldrich.com) offers its TDF100A Total Dietary Fiber Assay Kit, which can be used for 100 assays, using a procedure based on AOAC 985.29.