The search for delivery systems for active packaging often seems never-ending to those of us who have been active in the pursuit of effective active packaging that senses some untoward environmental activity within or outside of food packages and responds to it. Most common among these is identifying the presence of moisture and immediately absorbing or adsorbing these excesses into or onto their structures, e. g., the ubiquitous “diaper pad” in the bottom of fresh meat, poultry, and produce trays. 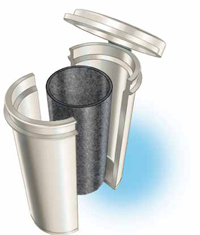 During the past decade or so, other mechanisms have been proposed and developed to deliver activity, not the least of which has been the multiphase plastic technologies of CSP Technologies (www.CSPTechnologies.com) in Auburn, Ala.

Diabetics are familiar with the daily routine of opening unit-portion packages of blood-glucose test strips to evaluate their blood sugar levels. With CSP Technologies’ multiphase polymer technology, a multiplicity of normally naked hygroscopic blood-glucose test strips may be packaged together in a single handy container, permitting the patient to open it, remove one strip, and reclose the package. In less than a minute, multiphase plastic embedded desiccants restore dry conditions in the package to protect the efficacy of the strips. By incorporating desiccant into high-surface-area package structures, water vapor may be adsorbed into the plastics additive.

Such technologies could benefit quality retention in packages of low-moisture foods such as instant coffee; beverage, soup, and sauce mixes; long-shelf-life confections; salty snacks; and a host of other such food products. Or carrying the concept further, placement of active packaging components such as antimicrobial emitters or odor absorbers in three-phase geometry could achieve what to date has mostly eluded food packaging technologists: the active packaging in the packaging plastic.

If the active agent is blended with the base plastic, it is beneath the plastic surface; i.e., a “barrier” is erected between the active component and the contained product. In such a situation, migration would be required through the plastic—which leads to delay in activity and uncontrolled concentration levels. Engineering the plastic with the active agent to initiate its function instantly—and subsequently have it continue in a controlled mode—is the objective.

Three-Component Technology
The three-component channeling plastic consists of a majority polymer, a minor polymer that is immiscible in the major polymer, and a particle (of active compound) that resides in or on the minor polymer. Interconnected solid pathways throughout the plastic allow controlled movement of gases in and out of the plastic. The particles or active agents can absorb water vapor, gases, odors, etc.; release aromas, gases, nutrients, etc.; or transmit them by modifying the transport properties of the plastic.

Among the typical three-phase formulations employed by CSP Technologies are polyethylene (PE) plus polyethylene oxide (PEO) plus active particles such as silica gel or molecular sieve desiccants. The PEO phase preferentially wets the base active particles, forming a PEO/particle network in a surrounding matrix. Alternative combinations include mutually immiscible hydrophobic PE and hydrophilic polyglycol to create a two-phase network leading from the surface to the entrained (third-phase) particulates residing on the channel surfaces and thus creating a three-phase network.

A microcompounder is employed to combine the major hydrophobic polymer (PE or polypropylene) and the minor hydrophilic polymer (PEO or poly glycol) with the micrometer-size active particles that demonstrate an affinity for the hydrophilic polymer. During subsequent extrusion/injection plastic processing to produce package structures, the active particles are encapsulated by the PEO or polyglycol polymer to create interconnected channels.

Functions of the three-phase system in a packaging context include absorption, adsorption, controlled release, and alteration of transmission characteristics.

• Absorption. Absorption can include active components entrained in the polymer to create materials with predictable absorption channels. Among the compounds that could be absorbed are water vapor; oxygen; sulfur- or amine-based odors or aldehydes from lipid oxidation; carbon dioxide; and ethylene—all of which are involved in contained food or beverage deterioration.

• Controlled Release. The release objective is achieved by utilizing interconnecting transmitting channels. Channels within the polymer matrix are used to diffuse gases into the matrix; the gases react with the active component that triggers a release if warranted. Active components within the polymer matrix release a desired agent, which then diffuses through the solid pathways and into the surrounding environment.

Morphology
The microscopic three-dimensional pattern of the regions of two polymers “blended” with each other is designated the combination’s morphology. The properties of the final product are influenced by whether one is dispersed in the other as microscopic droplets, rods, platelets, or other geometries.

In the new technology, a weblike morphology of one polymer (e.g., PEO) within the other (e.g., PE) is created. The web forms a co-continuous, interpenetrating channel structure, which generates a continuous pathway from one region of the PEO polymer to all other regions of PEO within the matrix. The combination can be remelted and processed and still exhibit the channels in the final plastic piece. The active particulate resides on the surface of the channels after the melt solidifies.

• Water Removal. When the channels are selected to be hydrophilic as with the PEO or polyglycol, water wicks through the channels into the combination. If the incorporated particulate is a desiccant particle, it will absorb the water so that moisture is continually wicked up the channel to the particle. The combination then is an active, controlled-transport desiccant.

• Gas Absorption. By selecting the particulates, gases other than water vapor may be absorbed: adverse odors emitted from low-level biochemical deteriorations such as lipid-oxidation aldehydes and ketones; ethylene from fresh fruit respiration to extend shelf life; and excess carbon dioxide, also from respiring produce to prevent untoward reactions. Obviously, the employment of active particulates requires that the basic barrier properties of the plastic package structure are present. No amount of desiccant can overcome a package that is not a moisture barrier.

Derived from an article titled “Active Packaging: Improving Shelf Life and Stability” published in the medical device journal MD&DI, (Harper et al., 2009), this column attempts to update my January 2004, column on this topic and to relate it to contemporary food packaging issues.

As is (or should be) known to all veteran food scientists and technologists, food products can be compromised by the presence of foreign molecules during processing, packaging, and distribution—due in some part to the absence of perfection in packaging structures. Consumer food product packagers have implemented no end of protocols to control the quantities of these compounds and their reaction products and to enhance product integrity. To date, options for moisture control have been largely bounded by moisture control external to the package and the above-mentioned absorbent pads, plus an occasional venture into humidifiers.

Oxygen has been limited by vacuum packaging, inert gas purging, and flushing, which are expensive and inefficient, or by chemicals in sachets or in the materials imputed into package materials that absorb the oxygen. In less frequent applications, some package material suppliers have inputted oxygen generators into the structures to emit oxygen gas to affect color or respiration. Oxygen absorbers, also often referred to as scavengers, target gases within the package structure and thus improve shelf life and better retain original product quality. Claims are made that the removal of oxygen also enhances product safety, but that is not necessarily substantiated by food microbiologists because of the presence of anaerobic spore-forming pathogens in low-acid foods.

According to the MD&DI article, “The CSP Technologies (oxygen) scavenging films’ polymer system is a blend of components. The first is a Chevron Phillips/Cryovac oxidizable base polymer, poly(ethylene methacrylate cyclohexenyl methacrylate) (EMCM). The second component is a masterbatch consisting of a transition metal catalyst and a non-migratory photo initiator, in addition to a channeling agent and a base polymer. The non-migratory photo initiator allows the packager to initiate the oxygen scavenging mechanism just prior to filling, which maximizes the capacity of the active scavenging component.

“Upon UV radiation activation, the polymer system of CSP Technologies scavenging films absorbs residual oxygen in the package headspace and additional oxygen that may permeate through the primary barrier,” the article continues.

How valuable might multiphase plastic packaging technologies be to food packaging? To paraphrase distinguished MIT scientist and CSP consultant Robert Langer, multiphase plastic packaging represents “a breakthrough in materials science” which enables controlled transport of small molecules through polymers—fostering myriad applications for absorbing and delivering actives. And doesn’t that achieve a major objective we have been seeking?