The United States is a major producer of grains for the world. Wheat, corn, and soy are the leading grains that consumers often think of; others such as barley and rye may also make the list. Many U.S. consumers have never heard of sorghum or, at least in the southern United States, may think of sorghum only in terms of molasses. U.S. manufacturers have largely ignored using sorghum for human food. Although sorghum is a major grain grown in the United States, domestic acreage dedicated to its production has declined steadily in recent years (see p. 58). In 1997 the total acreage devoted to sorghum production in the United States was 9.8 million acres (USDA, 2010). In 2010 the total production acreage was about 6 million acres. In comparison, the acreage used for corn increased from 78 million to 86.5 million in the same time period, perhaps driven by ethanol production. Despite the decline in sorghum production, the United States is the no. 1 producer of sorghum in the world and the no. 2 exporter. 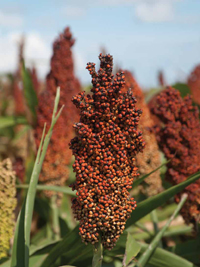 In the United States, sorghum is used to produce livestock feed, pet foods, household building materials, and sometimes ethanol, but it is a preferred grain for human diets in other parts of the world, such as Africa and Asia. In these places, sorghum is useful because it needs little water and can survive in harsh climates where other grains may be difficult to grow. In essence, it is more sustainable than other grain crops. Communities that normally had consumed sorghum and then changed to other grains often return to sorghum by preference. Sorghum’s human nutritional attributes indicate that it is a good source of several vitamins and minerals, including B vitamins, magnesium, iron, zinc, and copper, although high tannin levels in the brown and black varieties of sorghum may lower iron bioavailability because of chelation.

Sorghum Promotes Human Health
Despite the abundance of grain in the United States, sorghum should be considered an addition to a healthy diet for several reasons. First, sorghum is known for its rich antioxidant profile, particularly in brown and black sorghum varieties. Epidemiology studies have shown that increased intake of sorghum is associated with decreased esophageal cancer rates (Van Rensberg, 1981; Chen et al., 1993). As early as 1981, a published report suggested a lower incidence of esophageal cancer in sorghum-consuming nations such as parts of Africa, Russia, China, and India (Van Rensburg, 1981). A later study in China reported that communities that consumed sorghum foods at higher levels had a lower mortality rate of 1.5 to 3 times from esophageal cancer than communities consuming corn and/or wheat flour (Chen et al., 1993). Cell culture data using several cancer cell lines also reported an antimutagenicity effect of the polyphenolic fraction of sorghums or an anti-cancer effect of sorghum tannins (Grimmer et al., 1992; Gómez-Cordovés et al., 2001). In South Africa, esophageal cancer rates increased with increased corn consumption but decreased with increased sorghum consumption (Isaacson, 2005); however, this effect may have been indirect because some corn contains Fusarium fungi that can alter nitrates to nitrites, which are potent cancer-causing compounds. Nevertheless, sorghum is a rich source of anthocyanins and tannins, which are strong antioxidant pigments. In fact, the anthocyanin content of black and brown sorghums is higher than that of blueberries, which are normally considered one of the best sources for these pigments in Western diets (Awika and Rooney, 2004).

Second, sorghum is lower in calories than other grains due to its lower digestibility. Weight gain of animals consuming sorghum is lower, especially when they eat varieties high in tannins. Some suggest that tannins may bind to digestive enzymes and make them less reactive whereas others suggest that tannins can bind to proteins and carbohydrates and make them unavailable to digestive enzymes (Awika and Rooney, 2004). Given the well-known U.S. obesity epidemic, a lower-calorie alternative grain source would be valuable.

Third, many consumers are demanding gluten-free diets. This demand has spawned a new industry. The size of this industry should not be underestimated. The incidence of celiac sprue and gluten sensitivity appears to be increasing. This is due to not only better diagnosis but also a trend toward a loss of immunological tolerance throughout adulthood (Catassi et al., 2010). One study suggested that in 1978 those with celiac disease autoimmunity increased from 1 out of 500 people in 1974 to about 1 in 220 people in 1989 (Catassi et al., 2010). The same study reported that celiac disease incidence is doubling every 15 years. Descriptors of the disease appear to be changing, with the term celiac disease often used to describe gluten-sensitive enteropathy. However, a number of cases are now recognized in which other signs of gluten sensitivity occur without the manifestations of enteropathy, and this is now commonly referred to simply as gluten sensitivity (Hadjivassiliou et al., 2010). Gluten sensitivity can occur later in life; with more Americans living longer, this incidence will likely increase and lead to new demands for gluten-free products. One study suggested that about 10% of the general population may have either a wheat allergy, gluten sensitivity, or celiac disease (Sapone et al., 2010). Although many food scientists may view gluten-free products as a niche market, recognizing the possibility that this niche may be larger than expected and may continue to grow is important. If the estimate that 10% of the general population is being affected by some type of wheat product or protein is correct, then the potential to serve this segment of the population with gluten-free food is no longer relegated to a niche market.

A fourth reason, indirectly related to health, is sustainability. The notion of using sorghum only for animal feed or as a crop in developing nations may be shortsighted. Given the trend toward a more sustainable food supply, sorghum is a green product because it is drought-resistant and needs minimal or no irrigation. Sorghum is less costly to farm and could mean lower consumer costs for a final product, which could drive consumer demand. The food industry is overlooking a healthy, sustainable, cost-effective food source that could be profitable for industry and accepted by domestic consumers.

Use of Sorghum for Human Consumption
The most typical form of human consumption of sorghum is as a porridge. In this form, satiety levels are claimed to be higher compared to other grains, but this has yet to be confirmed by controlled human studies. The satiety claims are likely to be accurate given that sorghum typically has a greater water-holding capacity, a property that translates into the grain assuming larger volume in the gut. Sorghum also has been used in some nations to make a flatbread, such as roti in India. In North Africa, sorghum was originally the grain used to make couscous, which in some parts of the world has been replaced by wheat. Another traditional use of sorghum is as a grain for malted beverages, and it can be used to make cookies and cakes.

Archer Daniels Midland (ADM) recently milled white sorghum flour and used it to develop several products, including cookies, cakes, and other baked goods. At Kansas State University,researchers have produced cereal and pasta through a recently developed extrusion process (Alavi and Cheng, 2007; Yoo et al., 2011). Possible limitations for sorghum use are the industry’s lack of knowledge of potential roles and markets, a lack of interest in developing and expanding a market for sorghum-based products, or lack of a target market for domestic consumption.

When a new product is developed, market patterns fall into two categories: “science push” or “consumer pull” (Wennstrom, 2000). In the science-push pattern, arguments from scientific evidence are pushed on consumers to make them understand that they need the product. On the other hand, in the consumer-pull pattern, arguments from consumers are pulled to make science understand that they need the product (Krieger et al., 2003). In both cases, the consideration of the right of the product to exist is critical. What right (or need) does the product have to be developed and ultimately used by consumers? If a consumer need is not met, the product will fail regardless of a producer’s or manufacturer’s desires for success.

Food products comprise many components; identifying these components and studying how they affect the acceptance of a product will significantly increase its opportunity for success in the market. Researchers know that the acceptance of a product and willingness of consumers to change behaviors is not based on a single attribute but is a function of many attributes combined (Lee and Lee, 2007; Bayarri et al., 2010; Chrea et al., 2010; Deliza et al., 2010). A key element is missing in the achievement of a new product developed with sorghum. This element could be a health claim, attractive packaging, or perhaps a low price combined with one of the aforementioned attributes. For example, one study conducted on consumer expectations for food bars determined that consumers desired food bars with fewer than 150 calories, whole grains, and higher protein (Mahanna et al., 2009). Obtaining data on key aspects before launching a product saves time and money and guarantees the product will be adapted to consumers’ demands.

Those interested in the future of sorghum should follow these steps: 1) educate U.S. consumers; 2) educate food manufacturers; and 3) develop products that are reasonably priced, healthy, convenient to use, and tasty. Interested parties must form partnerships to promote sorghum as a healthy domestic human food grain. Farmers, producers (i.e., companies who pay farmers to grow sorghum), state and national sorghum boards, nutritionists, food product developers, sensory scientists, marketers, and the U.S. Department of Agriculture are some of the key partners that need to come together. The land-grant mission of the Cooperative Extension Service has the ability to educate both consumers and food manufacturers and could play a critical role in bringing these parties together. Although some symposia pertaining to the health benefits of sorghum-based products have already been held, organizations such as the Institute of Food Technologists and the American Association of Cereal Chemists can promote even more education of food manufacturers through symposia and workshops at their national meetings. Clearly, additional work on cost to the consumer and convenience are well within the grasp of current food technology. Work on sensory profiles of various sorghum products and consumer acceptance is needed to bring sorghum products into a competitive marketplace and help them succeed.

Denis Medeiros, Ph.D., R.D., is an IFT Member and Professor and Head of the Dept. of Human Nutrition at Kansas State Univ. ([email protected]).

Isaacson, C. 2005. The change of the staple diet of black South Africans from sorghum to maize (corn) is the cause of the epidemic of squamous carcinoma of the oesophagus. Med. Hypotheses 64(3): 658-660.