Water is used for a wide variety of functions in a food plant. Many of these functions offer opportunities for improved efficiency, but because water is relatively inexpensive, the capital to implement such opportunities may not always be available. Nonetheless, visionary firms are making investments in water conservation and reuse to help their plants become more sustainable. Sustainability has consumer appeal and usually results in saving money over the long term. We will examine some of these uses for water and the corresponding opportunities. 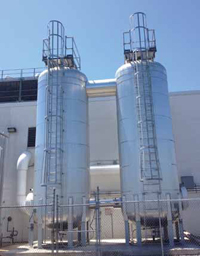 Ingredient Water
Water is the major ingredient in many beverages, and an important component in most other foods, excluding those that are dry, of course. In the latter case, where water is removed by drying or evaporation, it has been suggested that the water be recovered and sold as a uniquely pure type of water, perhaps with a hint of flavor from its source. This was the case with a dryer in Haiti processing mangoes. The water that was removed was being discarded, despite Haiti’s chronic water shortage.

By law, ingredient water must be potable, meaning that it is free from pathogens, toxic chemicals, turbidity, and high salt levels (above 250 parts per million). Potable water may be nominally safe to drink, but does not necessarily taste good, often because high levels of chlorine are added to ensure safety. Most beverage manufacturers treat potable water to remove chlorine (using activated carbon) and turbidity (using filters and flocculants). Some also soften water if it contains a high level of calcium and magnesium.

Softening can be done with ion exchange or with an older process using lime and sodium carbonate. Surprisingly, food processors such as bakers, soup manufacturers, and many others do not treat ingredient water in spite of the knowledge that water composition can affect yeast fermentation and flavor of foods. It is highly likely that treatment of ingredient water to some consistent state would improve consistency among multi-plant manufacturers. One approach would be to use reverse osmosis or ultrafiltration with membranes along with carbon filtration.

The need for softening depends on the product and the local composition. Hard water can cause scaling in heat transfer equipment because, perversely, calcium and magnesium salts precipitate as temperature increases. On the other hand, hardness is known to affect the flavor of fermented beverages, such as whiskey and beer. The point is that ingredient water is too often overlooked as a critical component of food.

Further, in many jurisdictions, sewage charges are based on the water bill, reasoning that most of the incoming water is eventually discharged. This is certainly not true in a beverage plant, and may not be true in many other food plants. Thus it is useful to meter both purchased water and waste discharge separately and pay accordingly for each.

Cooling Water
One of the largest volume uses for water in a food plant is to cool products, in or out of containers. It is common for cooling water to be used just once, despite the fact that it is rarely contaminated. This contributes to the volume of waste discharge but little, if any, to the biological treatment load of the waste. (Sewage charges are usually based on a combination of hydraulic load—the volume—and the biological treatment load—typically expressed as biological oxygen demand (BOD).) Reducing either volume or BOD can reduce treatment charges.

The simplest way to reduce cooling water consumption is to use a cooling tower, in which hot or warm water is cooled by partial evaporation in a structure designed to contact the water with large volumes of air. Air circulation may be natural, using a chimney effect, or forced, using fans. (The large hyperbolic concrete structures that are characteristic of nuclear power plants are natural circulation cooling towers. A cooling tower for a typical food plant is much smaller.)

Some water is lost by evaporation with each cycle of use, and must be made up with fresh water. Also, any dissolved solids in the water tend to become concentrated with each cycle so some water is periodically discharged to waste. The coldest temperature that the water can reach is the saturated wet bulb temperature at the prevailing air temperature. This is often close to the normal temperature of ground water. In cold climates and seasons, water circulation must be maintained to prevent freezing.

Wornick Foods, Cincinnati, Ohio, went from using one million gallons of water per day to 70,000 gallons per day by installing a cooling tower, according to Jon Geisler, President and CEO (phone 513-552-7403). Geisler figures the project will recover its cost in about two years.

Another approach to reusing cooling water is to collect it and use it for cleaning to take advantage of its warmth and relative purity. This calls for a storage tank and associated piping. There usually is more cooling water available than cleaning requires, so the reduction in discharge may be modest, but some energy is also saved.

Cleaning Plant
Food processing equipment is often designed for cleaning in place (CIP), which may be required at least daily and between flavor changes. A typical CIP cycle involves the following stages:

The cleaning solutions are hot and the exact formulations and cycle times are determined empirically for the specific soils. In the United States, circulation rates must exceed 5 ft/sec in the piping. Tanks are cleaned with spray balls or rotating nozzles designed to cover all surfaces. Some equipment must be disassembled and cleaned by hand, termed clean out of place (COP), a process that is usually performed in special sinks.

One opportunity that has been applied successfully is to recover and reuse the burst rinse in the product. This water has the highest content of product and so would contribute the highest load to the waste. Reusing it involves a dedicated holding tank and appropriate piping and controls. Whether credit is taken for the dissolved solids depends on the amount and precision of formulas. In the case of a large ice cream plant, the recovered water was treated just as pure ingredient water. In another case, the recovered water could be analyzed and the formula adjusted accordingly. Savings result in purchased water and waste charges.

Cleaning Raw Materials
In many food plants, water is used at several points in the process to wash final product as well as to clean at intermediate points. An example is clam processing to make dice that are an ingredient for soups and sauces. Mud is washed off the dredged clam shells, then the meat is washed after shucking to remove bits of shell, and the final dice are washed before freezing.

The suggestion was made to use fresh water only for the final product and to reuse the water counter-currently, so that relatively dirty water was used to remove mud from the incoming clams, and then discharged to treatment. The result for a plant on the Chesapeake Bay was to cut water use by a factor of three. This same principle can be used anywhere that water is used at multiple points to contact product.

Recycled water may need to be filtered or screened to prevent excessive wear on pumps and clogging of nozzles. Companies such as Lyco Manufacturing, Columbus, Wis. (phone 920-623-4152, www.lycomfg.com), and Orival, Englewood, N.J. (phone 800-567-9767, www.orival.com), make such equipment and offer assistance in designing systems to recover and reuse water within a plant, according to their respective websites.

Sanitary and Grounds Water
Water for hand washing, toilets, laundries, kitchens, and other domestic type uses is typically low volume, but may present opportunities for reuse after simple treatment. So-called grey water is commonly used for irrigation. Likewise, rain water should not be discharged to sewer, but rather should be dissipated on site, preferably in a constructive fashion, as by irrigating landscaping or, possibly, by make up for cooling water.

Reuse of such water is easier to implement from the beginning of a new project rather than by retrofitting an existing facility. The incremental cost of new construction is modest, while it would probably be very difficult to justify once infrastructure is in place because the cost savings, if any, are small. The value comes from complying with sustainability and green initiatives.

Other Special Waters
Boiler feed water (BFW) is specially treated water used to raise steam. The objective is to reduce scaling and corrosion in the boiler and steam distribution system. BFW is often relatively expensive so steam condensate is usually recovered and returned to the boiler. This requires additional piping and may require some sumps and pumps, depending on the steam pressure. Many food plants do not need high pressure steam, which can save money on the boiler and on staff (a licensed operator may not be needed for a low-pressure system). Recovering condensate also saves energy because the condensate remains hot.