Dramatic changes in consumers’ eating patterns and preferences, unprecedented cultural, demographic, and economic diversity, and personal passions for healthier, more humane, and planet-friendlier fare are creating a series of fast-emerging, high-potential niche food markets that are worthy of attention today and destined to be a bellwether for the mega-trends of tomorrow. 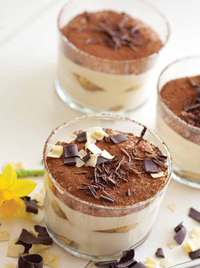 While the economy has caused some consumers to focus solely on the cost of food, many Americans appear willing to spend more of their discretionary food income on products that align with their personal values. One in five consumers (22%) is actively looking for new foods/drinks to try (IRI, 2012a). It is the intent of this article to discuss these values and identify the fastest-growing, high-potential food/beverage subsectors, both large and small.

Hot Spots
Roughly 40% of all adult eating occasions are now characterized by a “savoring” approach to food. It entails a more sophisticated, culinary food experience defined by freshness, distinctive flavors, and foodie narratives. This may well be the initial sweet spot to accelerate packaged food/beverage market growth, according to the Hartman Group (2011a).

Forty-four percent of consumers are continuing to cut back on restaurant visits in 2012, opening new avenues for restaurant-quality meals at home, restaurant-branded foods, and a pool of disposable food income for packaged goods marketers (IRI, 2012b).

One-third of adults are cooking more at home than they did last year; 55% of Millennials are doing so as well as 37% of Gen Xers, 35% of Baby Boomers, and 20% of mature consumers (FMI, 2012). Not surprisingly perhaps, in this environment, cooking skills are upgrading fast; 50% of Millennials describe themselves as very competent cooks, 60% of Gen Xers, 64% of Boomers, and 55% of mature consumers (MSI, 2011).

Eight in 10 adults (81%) are making a strong effort to eat fresh foods instead of processed, 61% avoid foods with chemical additives/preservatives, and 52% are making dietary changes for food safety reasons (MSI, 2012).

Half (52 %) of U.S. adults watch television cooking shows. Cooking show viewing time averages 4.2 hours per week, and 57% of these consumers have bought a food product as a direct result of a cooking show (Tanner, 2011). 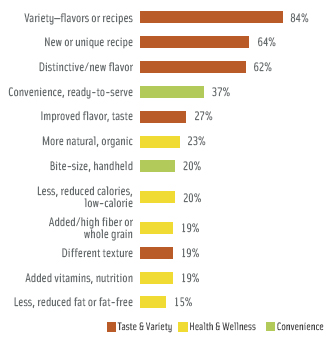 Marketers’ efforts to cater to home-based eating and an increasing focus on targeted/niche market innovation drove growth in the food/beverage arena in 2011 (IRI, 2012a). New flavor, variety, or recipe was the most prominent claim found on the top-selling new foods/ beverages of 2011 (IRI, 2012a). One-third of these products touted convenience or ready-to-serve attributes; one in five was bite-sized or handheld (Figure 1).

The Cold Case
The perishables department, center store, and frozen departments are enjoying unit sales growth at a pace well above the industry average (IRI, 2012b). Fresh remains the most important food attribute: 68% of shoppers look for fresh descriptors; 62% seek out food prepared that day; 53% look for food that was made from scratch; and 51% want food that was never frozen. The vast majority of consumers (70%) think fresh food is healthier than processed (Technomic, 2010a).

Refrigerated entrees were the seventh-fastest-growing consumer packaged goods category in grocery, drug, mass, and convenience stores excluding Wal-mart (FDMxC) in 2011 (IRI, 2012b). Food retailers predict the prepared food/deli section will have the biggest traffic gains in 2012 (Major and McTaggart, 2012).

Health is a key factor for 40% of adults when choosing fresh prepared meals in supermarkets or other retail outlets; 42% look for unique flavors or recipes; children’s meals are a major market void (Technomic, 2010b). Refrigerated soup is a small, but very fast-growing sector as shoppers opt for fresh soups at dinner or as toppers for rice or pasta. Sales grew 11.8% to $131 million for Y/E 11/28/2011; sales of private label refrigerated soups climbed 6.8% to $115 million (Facenda, 2012a).

Sales of packaged salads, especially complete grab-and-go versions, reached $2.9 billion for Y/E 12/25/11. Dollar sales and volume jumped 7% in the fourth quarter of 2011 vs 2010 for value-added vegetables; the growth is attributed to the increasing popularity of fresh produce side dishes (Strailey, 2012).

Fresh produce snacks are another hot category, with unit sales up 4.6% for Y/E 7/16/11. Value-added fruit, fruit jars/cups, and vegetables for snacking were strong gainers (Strailey, 2011).

Natural and organic meat/poultry are also fast-growing perishable niches. One-quarter of shoppers bought natural/organic meat in the past three months, up from 20% in 2011; 20% say they’ll be buying more (FMI, 2012).

Sales of heat-and-eat and ready-to-eat meat/poultry are also strong, with 35% and 37% of shoppers, respectively, using these items at least once a week (FMI, 2012). Dinner sausages, artisan bacon, and chicken/seafood breakfast meats are also fast-growing but smaller niches.

Prepared seafood meals are one of the fastest-growing items at the fresh fish counter, with sales up 24% in unit volume in 2011; the prepared seafood category grew 7.7%, and seafood side items were up 4% (Mitchell, 2011a).

Specialty eggs (i.e., eggs that are enhanced with omega-3s or vitamin E or are from cage-free or vegetarian-fed chickens) are another hot sector, up 21% in unit sales in specialty markets over the past two years (Tanner, 2012). Sales of Eggland’s Best eggs reached $357 million, with unit sales up 13.7% (GH, 2012).

Cakes and cupcakes are still the sweet spots in the fresh in-store bakery, with sales up 4% and 18%, respectively, in 2011; cakes contributed 29% of sales revenues in the in-store bakery; decorated cakes were the largest cake segment. Keep your eye on mini-sized cakes, specialty single-serve treats, and ethnic favorites (e.g., panna cotta and tiramisu) (Licata, 2012b).

The number of meal preparers who say it is very important that dinner is made from food that is “fresh, not processed” rose 6% over the past two years to 44%; 29% say fresh meals are somewhat important. Easy to prepare is very important to 38% of consumers, up 8% from 2009 (MSI, 2011).

With 75% of trendy Millennials and Gen Xers cooking more from scratch in 2011, gourmet versions of baking/cooking ingredients will have high appeal (FMI, 2011).

Sales of specialty vinegar/cooking oils reached $619 million in 2011; sales of gourmet shelf-stable pasta/pizza sauces totaled $488 million, up 10% in unit sales over the past two years (Tanner, 2012). Kraft’s Fresh Take is a new blend of natural cheese and seasoned bread crumbs found in the dairy aisle.

One-quarter (24%) of meal preparers are using the oven more than they did five years ago, 23% are making more use of crockpots/slow cookers, and 16% are stir-frying more. Expect less processed “oven-bake” dinners/kits and crockpot/wok-specific meals/ingredients to have high appeal (FMI, 2012).

With outdoor grilling up 17% and indoor grilling up 11% over the past five years and 92% of grocery shoppers buying less expensive cuts of meats, marinades are another category poised for growth. Eighty-five percent of meal preparers use marinades for meat/poultry, up 10% vs 2010; 36% use their own mix, 58% use a store-bought marinade, and 6% bought pre-marinated meat (FMI, 2012).

Scratch cooking dominates in-home ethnic cooking: 59% of consumers buy sauces and/or seasonings and make the meal from scratch; 26% use time-saving products/kits requiring some preparation; and 15% use pre-made, shelf-stable, refrigerated, or frozen ethnic meals (Mintel, 2012a).

Kosher, all natural, no additives/preservatives, and ethical/environmental were the top claims on new gourmet foods/beverages in 2011; specialty retailers predict local, all natural, and sustainable will have the strongest gains over the next three years (Tanner, 2012).

Nearly half (45%) of specialty food retailers identified Latin, other than Mexican, as a top emerging cuisine, 37% Mediterranean, 31% Indian and Vietnamese, 29% Eastern European, and 25% Spanish (Tanner, 2012).

Over half of specialty shoppers (55%) bought gourmet Italian foods in 2011; 52% bought Mexican, 39% Asian/Chinese, 29% regional American, 28% Vietnamese, Japanese, or Korean, and 20% Spanish or Mediterranean (Tanner, 2011). Looking further out, 31% of food importers cite Eastern European and Indian as hot emerging cuisines, 25% regional Italian and Mediterranean, and 19% Latin other than Mexican (Tanner, 2012).

Although cheese/cheese alternatives is the largest specialty food category with sales of $2.4 billion, it’s U.S. farmstead cheese and ethnic specialty cheeses, especially Hispanic, that are enjoying the strongest growth (Tanner, 2012).

Moreover, the buzz at the cheese counter is now as much about the cracker, specialty meats, and marinated vegetables that will accompany the cheese as it is about the cheese itself. Sales of specialty crackers/crisp breads topped $527 million in 2011 (Tanner, 2012). Sweet potato, mushroom, Kalamata olive, chipotle pepper, and sourdough are among the new flavors for gourmet crackers; crackers flavored like specialty cheeses are also trendy. Other trends in the cracker category include the use of alternative flours (e.g., spelt, flax); new sizes, textures, and thicknesses; and the addition of seeds. La Panzanella’s offers Croccantini Wine Biscuits.

With American Culinary Federation (ACF) chefs predicting that charcuterie samplers will be among the hot appetizers for 2012 and 38% of consumers entertaining more at home, expect cured meats, exotic sausages, and patés to enjoy explosive growth (NRA, 2011). Sales of specialty meats, poultry, and seafood—the second-largest gourmet food category—topped $1.9 billion in 2011 (Tanner, 2012).

Specialty soup sales were up 8% in unit sales over the past two years, gourmet condiments were up 6%, and shelf-stable gourmet pasta up 7%. Sales of gourmet dry pasta topped $444 million in 2011. Gourmet hot and cold cereals gained 13% and 8.2%, respectively, in units, albeit from a smaller sales base (Tanner, 2012).

Freezer Burn
Despite frozen food category growth expectations of just about 2–3%, some frozen segments are showing much stronger growth (Levitt, 2012).

P.F. Chang’s Home Menu line of frozen entrees/appetizers led the top 10 list of best-selling new foods/beverages in 2011, posting year one sales of $102 million, demonstrating the appeal not only of the Asian meals, but of restaurant-branded meals. With sales of $49 million, Lean Cuisine Market Creations placed eighth (IRI, 2012a).

Frozen pantry items are another strong sector; nonbreaded frozen fish (sales of $561 million) was the third-biggest gainer in the supermarket frozen food case in 2011, with unit sales up 5.3% (Nielsen, 2012).

Health Makes Wealth
Weight control/nutrition liquid/powder topped the list of the fastest-growing food categories in FDMxC in 2011, with unit sales up 17.9%, followed by energy drinks +17.5%, and sports drinks +11.3% (IRI, 2012b). 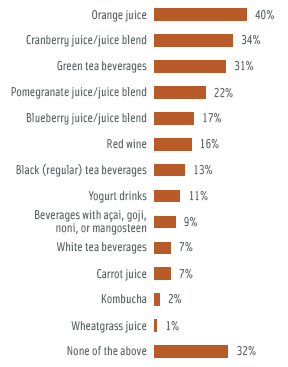 Orange juice tops the list of beverages purchased for health reasons last year, followed by cranberry juice, green tea, and pomegranate juice, or juice blends (Packaged Facts, 2012) (Figure 2). Despite its increasing popularity, 71% of consumers have not tried coconut water, and 66% have not sampled a beverage formulated with açai (Mintel, 2012b).

Nearly six in 10 consumers (56%) very frequently/occasionally bought food for specific health benefits in 2011. One-quarter (24%) bought foods/beverages for cholesterol; 23% for digestive benefits; 16% for immunity; 15% for joints/bones, heart/circulatory issues, or to control blood pressure; 11% for eye health; and 10% for diabetes (Packaged Facts, 2012).

Targeting Consumer Values
Organic food sales increased more than 9% in 2011 to $29.2 billion. Organic products represent 4.2% of total food sales, and the category is projected to grow by 9% in 2013. Of organic food purchases, fruits/vegetables accounted for 41%, dairy 15%, packaged/prepared 14%, beverages 12%, bread/grains 11%, and snack foods 5%. Although it is the smallest category, sales of organic meat, fish, and poultry grew 18% (OTA, 2012). 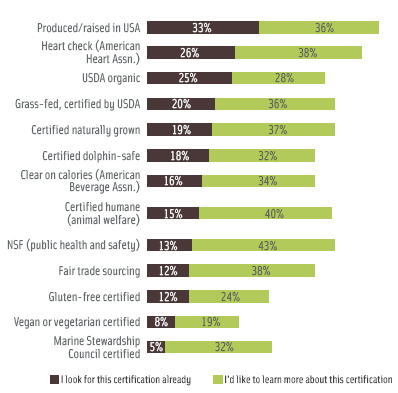 Four in 10 consumers are willing to pay more for eco-friendly products. Age and education play an important role; half of those ages 18–34 are willing to do so, and 48% of college graduates are willing (MSI, 2012). Seven in 10 consumers (68%) purchase foods that support cancer research; for children’s charities, the figure is 46%, local food banks 44%, and heart disease research 38% (Tanner, 2011).

It is clear that refrigerated space will be the hot spot in the supermarket of the future, especially if price and shrink are more manageable. It is more expensive for retailers to handle refrigerated products, but given consumer interest in fresh fare, it’s a segment of the market that deserves the attention of product developers and retailers. Marketers should be diligent about not reinventing categories that are over-processed or reliant on chemicals/additives. Products that are healthful, portable, convenient, and culinarily sophisticated will continue to lead the pack.